120,060 turned back from Makkah over Hajj permits 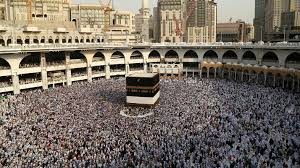 Saudi security authorities have turned back 120,060 people who arrived in the vicinity of Makkah without proper permits to perform Hajj.

The authorities also refused to allow 61,524 vehicles to enter the Makkah perimetres without the required permits, according to travelwirenews.com.

Hajj officials have repeatedly warned that there would be zero-tolerance towards allowing anyone to enter Makkah for the annual Hajj rituals without an authentic permission from the authorities tasked with overseeing the operations.

Extra human resources and equipment have been deployed at the various entry points to ensure full compliance with the regulations, the authorities said.

All drivers have been urged to ensure that the would-be pilgrims they were transporting had the proper permission to enter Makkah in order to avoid the consequences off breaking the regulations.

Saudi Arabia has been following a very strict policy with regards to the number of people living in the kingdom who can perform Hajj in a bid to provide better chances for those who have never performed the annual rituals and to control numbers in order to avoid excess crowds.

In early August, authorities warned that any Saudi Arabian expatriates who attempted to perform Hajj without permit would be deported and denied entry into the kingdom for 10 years.

A Hajj quota was introduced in 1987 following an agreement by all member countries of the Organisation of Islamic Cooperation (OIC) that the number of pilgrims allowed by each country would be 0.1 per cent of its population.

Every country has a Hajj quota of 1,000 pilgrims per million Muslim citizens. Under Saudi Arabia’s laws, no foreign Hajj applicant can enter the country if he or she is not registered with a Hajj operator.

The rule is in place to ensure there are no clandestine operations or the smuggling of people into the country on the pretext of performing Hajj.

Riyadh has also often reported that several pilgrims overstayed their pilgrimage visas and sought to settle in Saudi Arabia without proper documents.

According to the latest figures released by the General Directorate of Passports, 992,879 Muslims have arrived by Friday in Saudi Arabia to perform Hajj. Most of them, 946,182, arrived by air, while 43,114 arrived by land and 3,583 by sea.

The figures represent an increase by 182,543 pilgrims, (22.5 per cent) compared with the same period last year. Haj, the fifth and last pillar of Islam, is required physically fit adult Muslims with the necessary financial means.

The six-day Hajj season, expected to draw more than two million pilgrims, is expected to start on August 30.