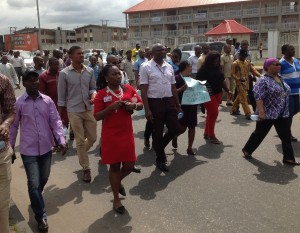 Few days after Hadi Sirika, Minister of State, Aviation, assured Nigerians that their interest will not be jeopardised in the resolve to concession some airports in Nigeria, Aviation workers, comprising members from the Air Transport Services Senior Staff Association of Nigeria (ATSSSAN), National Union of Air Transport Employees (NUATE) and the National Union of Pensioners (NUP), on Tuesday, staged a peaceful protest at the Murtala Muhammed Airport, Lagos, over government plan to concession four international airports.

The four international airports to be concessioned according to government include: Lagos, Abuja, Port-Harcourt and Kano.

The unions on Tuesday, described the plan as ‘economic sabotage’, saying the future of workers in the employ of Federal Airports Authority of Nigeria (FAAN) would be mortgaged into the ‘hands of some selfish individuals who are already coming forward to discuss with government on the concession plan’.

Last week, when the Management of the Infrastructure Concession Regulatory Commission led by its Director-General, Aminu Diko visited his office to present the ‘Commission’s Framework for Addressing the Development of Public, Private Partnership Projects in Aviation Sector’, Sirika had said ‘’the best way to go is had said that  ‘’the best way to go is the Public Private, Partnership and so, we are going that way’’

Concessioning of the airports, he stated would make the system go faster as what will take the sector a long time to do, owing to the paucity of funds in government, will be made easier by the partnerships to be entered into.

But the workers, through Acting General Secretary of NUATE, Olayinka Abioye and General Secretary, ATSSSAN, Francis Akinjole ,said that that they will resist any attempt by the government to concession the airports, adding that they would not the future of Nigerians in the hands of some ‘cartel’.

There was however, traffick standstill as vehicles could not move freely due to the protest in early hours of Tuesday.

It was also gathered that the protest took place in Abuja, Port-Harcourt and Kano airports.