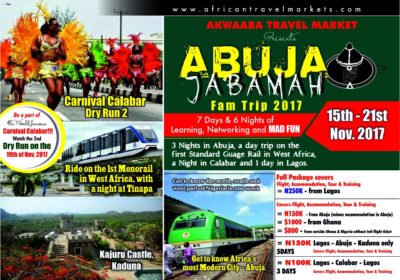 The organisers of Abuja Jabama and Akwaaba African Travel Market, have unveiled the winners of the first MICE Awards in West Africa.

According to the organiser of the event, MICE is the lowest hanging Tourism fruit for Nigeria and West Africa.

For Nation states with challenges in attracting leisure Tourists, MICE which means Meetings Incentive Conferences and Events is the key to growing Tourism. As Abuja is the highest Ranked Nigerian City, it is only appropriate to host the event in Abuja. With the Successes witnessed by Rwanda it is possible to leapfrog its tourism position using the MICE vehicle.

West Africa has not done well in MICE. According to the global association for meetings ICCA only, Accra, Ghana is in the Top 10 in Africa. It is ranked Number 9 in Africa. Abidjan and Dakar are ranked 13 while Abuja is Number 15, Lagos and Lome are outside the Top 20.

It is against this background that the organisers of Akwaaba are launching the first MICE event in Nigeria. The discussions will be on MICE as a concept in Hospitality and the lead speaker will be Charity Githinji, a Kenyan based in Tanzania.

Cost Control in Midlevel Hotels is the paper by Nnaemeka Agbasi CEO of NAC Hotels.

The topic ” Online Travel Agents and Hotels in West Africa” will be discussed by Jumia, Tripberry and Flyboku in a panel.

Awards will be given to the Pioneers of Tourism in Abuja and Best new hotels in Abuja.

The first MICE Awards ever in West Africa will be given to the Champions of the concept in the Region.

The Nominees of the awards are

Most Active Tourism States in Nigeria

This comes as the Lagos State Government has expressed its desire to deepen its relationship with organisers of Akwaaba African Travel Market for growth of tourism in the state.

Commissioner for Tourism, Arts and Culture Lagos, Hon. Adebimpe Akinsola, disclosed this to the Akwaaba team who paid a courtesy call at the commissioner’s office in Lagos.

Lagos State returned to Akwaaba this year after 5 years of absence. The Government had hosted all the visiting delegates to a city tour.

The Honourable commissioner celebrated the comeback as it has led to many positive results for both parties. She said the ministry is very proud to associate with Akwaaba and will work towards future projects.

The Ministry in a letter presented to Akwaaba team commended the Organiser of Akwaaba Travel Market for sustaining the event to her 13th year saying that it is In line with the Governors vision of project T.H.E.S.E which is to integrate Tourism, Hospitality, Entertainment/Arts, sports for excellence, the state government identifies with Akwaaba as a sustainable event and will partner for future events.