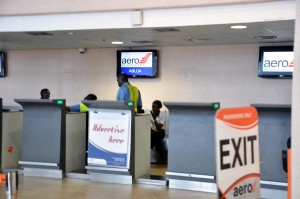 As the crisis that is rocking oldest Nigerian airline, Aero contractors continues, aviation unions; Air Transport Services Senior Staff Association of Nigeria (ATSSSAN), National Union of Air Transport Employees (NUATE) and other workers of the company, have asked the Economic and Financial Crimes Commission (EFCC), to investigate the dealings of the Assets Management Corporations of Nigeria (AMCON) in the airline, saying its mismanagement of the airline’s funds and corruption by its staff was responsible for the eventual comatose which the airline has found its self.

Speaking to the The Travel Port at the heaquartesrs of the airline on Thursday when the workers protested the compulsory leave handed to them due to inability to continue operations, Benjamin Okewu, President of ATSSSAN, said before the AMCON intervened in the airline, it had about 13 aircraft but has been reduced to 1 after the corporation took over 65 percent management of the airline.

He said apart from the mismanagent of funds on by the legacy shareholders, Okewu alleged that the representatives of  AMCON on the board of the airline may have committed more, adding that rather than save the situation when they came, they compounded it.

“The major problem with Aero is mismanagemt on the part of the legacy shareholders and those that represent AMCON or government. Imagine a case when aircraft that was purchased for $4 million was inflated to $13 million in the record by AMCON. It is also in record that AMCON paid over N380 million for debt rescheduling, these are issues we have asked the EFCC to investigate, when we raised alarm, they brought forensic experts but the result was not made known till today.

“About six aircraft are there now without engines, three have been taken to out for C-check, they didn’t come back but AMCOM met about 13 aircraft on ground, they ran the airline like a financial institution, even with discussions on redundancy, no sincerity, we had suspected that they wanted everybody to go and they were not forthcoming with the truth”, he said.

He explained that when they asked the airline to show them the number of workers that will be affected by redundancy plans, ‘they showed 465 workers and said about N2.4 billion  will be need to pay them but they never told us this is what they are planning, they didn’t tabulate it for usvto study clearly, they were just telling us figures, no tabulation to match the figures with workers until they took their desision’.

He added that the airline need to pay the workers Basic Housing Transport and other packages before they can be asked to go.

“The Federal Ministry of Labour officiaks had been here today, they have asked us to do a report and we will submit it soon”, he added.

On whether Aero can operate its helicopter services, he said it was not possible as the company has only Air Operator’s Certificate (AOC) which covers all operation.

“Apart from this, they use the same workers and cabin crew, where will they get the workers. They have even given their Chevron operations to Arik to operate for them”, he noted.

Aslso speaking, Abdulkareem Motajo, another union member said, ‘the corruption, which is the main issue with the airiine started with the legacy owners but AMCON which is supposed to revive it worsened it, we sent petitions to EFCC but we didn’t see them.

“Unfortunately, Aero’s contract could be taken away from it in the next few days in EFCC does not intervene, AMCON should not be allowed to go away with this”, he said.