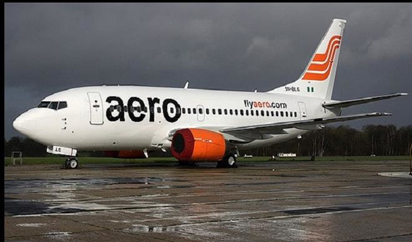 By Sade Williams
Aero Contractors Airlines on Tuesday, announced the resumption of its schedule services across the country from Wednesday December 21, 2016ter a near four month self-imposed suspension, which was embarked upon as a strategic business realignment to reposition the airline and return it to the part of profitability.
Aero in a statement by its media consultant, Simon Tumba, said it is re-launching schedule services to Lagos, Abuja, Warri and Port Harcourt, using its Boeing 737-400/500and the Dash8-Q400, with the expectation that as more aircraft return to service, more routes will be reopened.
Confirming the resumption of operations, the Chief Executive Officer, Capt. Fola Akinkuotu said: “We are delighted to inform our esteemed customers that our schedule operation is back. Full flights will commence on Thursday December 22, 2016 with consistent passenger demand despite the suspension of schedule services. This patronage reinforces the strength of our brand and the quality of our service”.
“We are aware of the impact the four month suspension had on our staff and our highly esteemed customers. Hence our move to return to operations is to continue to  offer the most reliable, safe and secure operations, which the airline is renowned for.
“We urge our passengers with existing tickets prior to the suspension to contact our Ticket Desks/Call Centre to rebook their tickets free of charge. However, those who would prefer a refund may send in their refund requests from the 9th of January, 2017.”
Aero is Nigeria’s oldest aviation company with 57 years flying experience.
Akinkuotu had in a statement in August 2016 said the airline had faced grave challenges in the past six months which impacted its business and by extension the scheduled services operations. These factors, according to him are both internal and external environmental factors that have made it difficult for the foremost airline to continue its scheduled services.
He had  said during the period in review, Aero, which was hitherto revered for its safety, timeliness among other virtues witnessed epileptic operations and services to the external publics that are caused by non-alignment of fundamental issue of the business, which in some cases have been frustrating and embarrassing to all parties including staff, customers and indeed all stakeholders.
The statement had also said ‘as part of its resolve to ensure the airline survived unlike most other carriers that experienced short life span in the country, AMCON had appointed Mr. Adeniyi Adegbomire SAN as Receiver Manager in February 6, 2016, with the aim of turning the airline around. Since AMCON’s intervention in Aero Contractors in 2011, it has provided support for the airline to meet working capital requirements and fleet expansion. These were to ensure the airline remains a going concern providing services to various clients and the general public.
“Unfortunately, the operating environment within and outside the airline have hindered any possible progress especially in the last six months when the Naira depreciated against the dollar thus making it impossible for the airline to achieve its operational targets”, the statement had read in part.
2016-12-20
Sade Williams