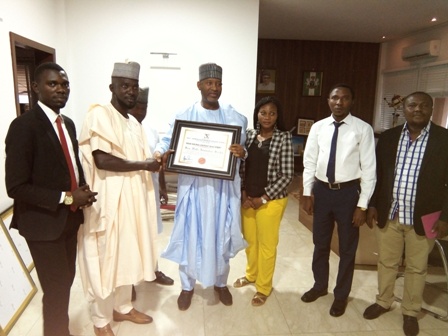 The All African Students Union (AASU), on  Friday in Abuja, presented an award to the Minister of State for Aviation, Senator Hadi Sirika  for his outstanding performance in office and exemplary leadership qualities.

President of the union, Mr Akinyele Olasunbo, while presenting the award to Senator Sirika in his office, said the award, dubbed “The Kwame Nkrumah Award” was in recognition of his contributions to the growth of the aviation industry not only in Nigeria, but the African continent at large.

“It is not all about whom you are but about what you do when given a position of trust and service to the people. We are here today to tell the world and to showcase your good performance in office as the Minister driving the vehicle of transformation in the aviation sector”, he said.

Responding to the gesture, Aviation Minister,  Sirika expressed surprise at the recognition of his humble contributions to the industry, saying it would only serve as a catalyst to do more.

He advised the students’ body and other civil society groups to always endeavour to hold public officers accountable to the society by not only highlighting their achievements, but also their inadequacies.