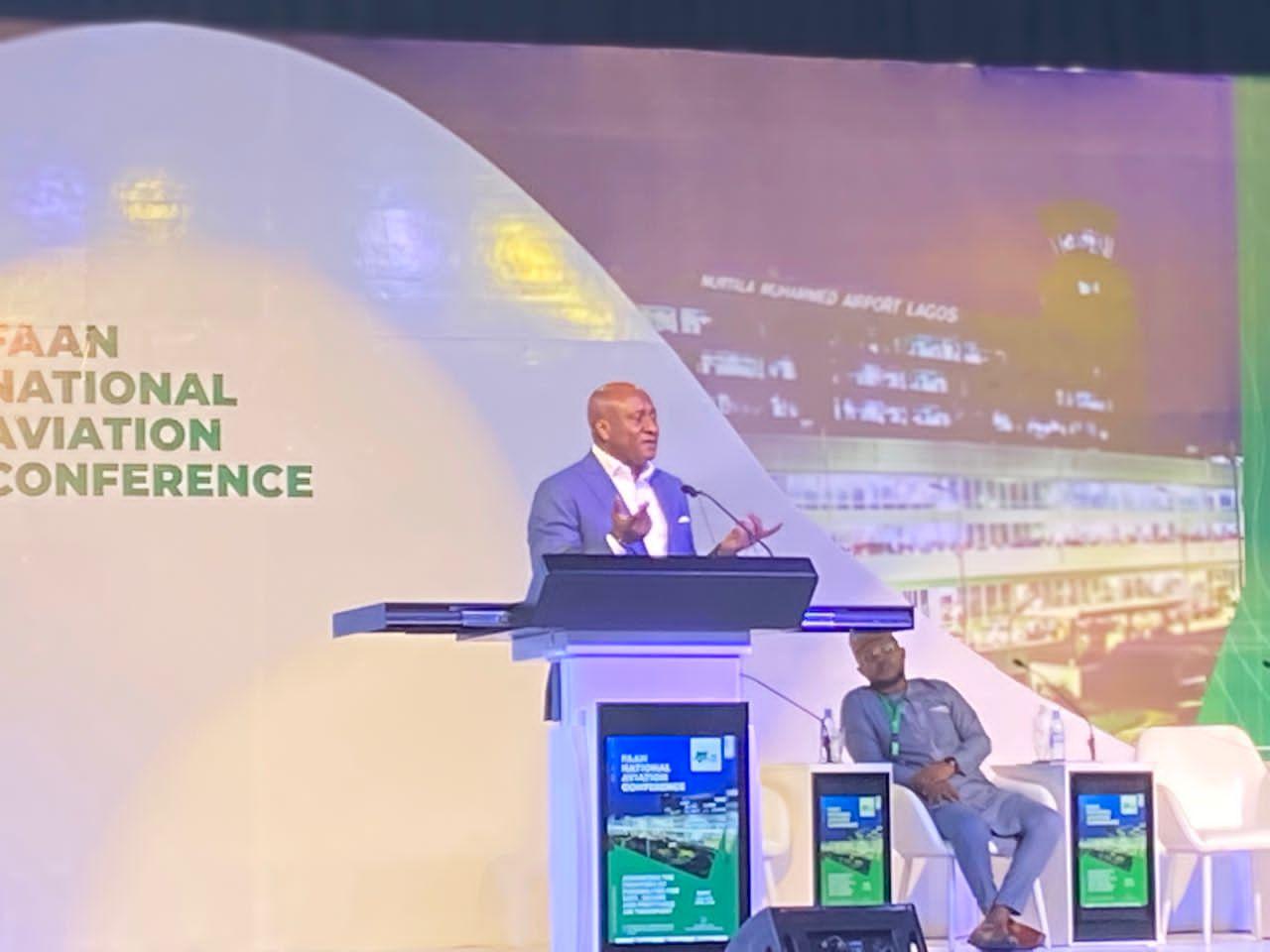 Barr. Allen Onyema, the Vice Chairman of AON, speaking on Wednesday at the FNAC in Abuja

…as AGHAN seeks waivers on GSE

Aviation stakeholders, including aviation fuel marketers, airline operators, ground handling companies and catering services among others,   have for the umpteenth time, decried scarcity of foreign exchange, increasing cost of Aviation fuel and other issues adversely affecting their businesses.

The Airline Operators of Nigeria (AON) has also expressed fears that at least three domestic airlines may close shop in the coming months due to the continuous rise in the price of Jet A1, otherwise known as aviation fuel in the local parlance.

The association has raised the alarm that aviation fuel has skyrocketed to N714 per litre in some airports in the country, thereby further compounding the woes of the operators.

The stakeholders bemoaned the paucity of foreign exchange and the collapse of naira against major currencies.

Speaking at the maiden edition Federal Airports Authority of Nigeria (FAAN) National Aviation Conference (FNAC) with the theme: ‘Advancing the Frontiers of Possibilities for Safe, Secure and Profitable Air Transport’, in Abuja on Wednesday, Mr. Allen Onyema, the Vice Chairman of AON, warned that if the present challenge of aviation fuel was not nipped in the bud, more airlines may shutdown operations in the coming months.

Though, he declined to name the airlines that could close shop in the next few months, but it was gathered that the airlines are going through rough times in their operations due to aviation fuel prices and other challenges.

Onyema, however, said that the aviation fuel challenge was not limited to Nigeria alone, but emphasised that ours is made worse because of the slump of naira against major currencies, especially the dollars.

According to AON, in order to address the challenge, the Federal Government had approved 10,000 metric tonnes of aviation fuel to the airlines, but said the carriers were yet to access it.

Onyema explained that the airlines hoped to start lifting the 10,000 metric tonnes of aviation fuel from today (Thursday).

Barely 16 months ago, the price of aviation fuel was about N200 per litre, but has rises to over N700 per litre today in the local market.

He said: ”That is why we ran to the government and the Federal Government has given us about 10,000 metric tonnes of fuel at the cost of N580 per litre in Lagos and about N607 per litre outside Lagos.

”This is not the only issue. Since the COVID-19 crisis, most airlines all over the world, including Nigeria have not recovered from COVID-19, except those whose countries have injected so much funds to assist them. This is no body’s fault. It just happened. Government has tried it’s best by giving us this aviation fuel. This aviation fuel can take airlines out, not only in Nigeria but everywhere in the world.

”Some airlines outside Nigeria have closed down because of the effects of rising aviation fuel. If these things are not addressed in Nigeria, it can affect the bottom line of all airlines in Nigeria.

”We have come to realise that there is little or nothing the committee set up can do because this is as a result of foreign exchange and price of oil all over the world now. The fuel marketers will sell according to what they are paying. The cost of aviation fuel has increased, even in London and every other country. Our own is worse because of the increase in foreign exchange.”

Besides, other players like aviation fuel marketers, ground handling companies and catering services in their separate presentations, complained about the state of infrastructure at some of the airports, but said FAAN in the last three years had done a lot to improve the facilities at the aerodromes.

Also, Mr. Bashir Ahmed, the Vice Chairman, Aviation Ground Handling Association of Nigeria (AGHAN), decried the level of infrastructure at most of the airports, saying that it limits pthe turnaround time of operators at the apron.

According to Ahmed, the scarcity of foreign exchange further reduces the operations and expansion of ground handling businesses in Nigeria.

He appealed to the Federal Government to take a critical look at the challenges in the industry and device a mean to addressing them.

He added: ”We still want to appeal to the Federal Government to grant waivers to handling companies on importation of ground handling equipment. Also, we need more scanning machines by FAAN to further improve our operations and create seamless services to our clients and the airlines.

”The Nigerian Civil Aviation Authority (NCAA) has also done well with its regulation of the industry. This shows that Nigerian aviation industry is changing.”

Engr. John Abegunde, a representative of aviation fuel marketers, appealed to the government not to step into the commercial related issues in aviation fuel supply, warning that this major jeopardize safety in the system.

Abegunde explained that FAAN, NCAA and other government agencies should rather be more concern about the stringency of the aviation fueling requirement.

He added that the fuel marketers subscribed to joint ownership of aviation companies, but kicked against the throughput arrangement, which he said may work against the industry growth in the future.

‘We should be wary of portfolio investors who come in when there are opportunities in the sub-sector, but moves out with their briefcases immediately there is a challenges,” he said.

Mrs. Adeola Omikunle, Chairman, Things Remembered Nigeria Limited, a catering service company in the industry, appealed to the government to address the myriads of challenges in the sector.

She also called for a change in the bureaucracy in order to hasten business decisions.