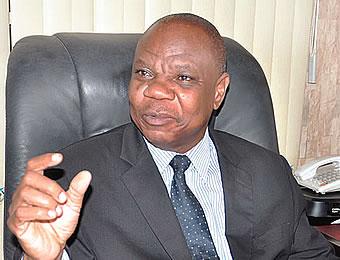 Dr. Felix Abali, Commissioner, Accident Investigation Bureau (AIB), on Wednesday, appealed to the Federal Government to exempt its technical staff from the embargo placed on foreign training since 2015.

Abali explained that accident investigation was a specialised area that required special training from  overseas.

Abali stated this yesterday at the bureau’s headquarters at the Murtala Muhammed Airport, MMA, Lagos during the visit of the House Ad-Hoc Committee on Non-Oil Revenue and Remittances.

The Federal Government had in early 2015 suspended foreign training and international travels by Departments and Agencies, MDAs.

The government had said that embargo on training and international travels was one of the cost-saving measures introduced following recent developments in the international oil market, which has affected the revenue stream of government.

Since the directive, which was announced by the Head of Service, Mr. Danladi kifasi in February 2015, technical personnel in the nation’s aviation industry had not been able to embark on foreign training to boost their knowledge.

Abali further advocated for the increase of the 3 per cent of the ticket sales charge accruable to AIB to 10 per cent, stressing that paucity of funds had prevented the agency from carrying out its duties as a responsible accident investigator.

He added that AIB as parts of its succession plan required special funding to operate and hoped that the committee would use its good office to push for the upward review of the ticket sales charge for the agency.

He added, “Fore emergency and high profile accidents, AIB requires an emergency or special account to meet this need. Malaysia MH 370 and TWA 800 accidents, among others are apt examples. Stakeholders and public awareness campaign requires adequate funding. We request for support in this area.

“Accident investigation bodies are not expected to charge for their services and so the opportunity to generate independent revenue is almost nil. Based on Annex 13 of the International Civil Aviation Organisation, ICAO, Manual, there should be special fund dedicated to cater to any major accidents. It has been very difficult to provide and keep this fund since every unspent money goes back to the Federal Treasury by 31st December of every financial year.”

He declared that AIB needed to urgently meet the need for qualified personnel to take-over from the crop of ageing technical personnel who he said were currently on contract, stressing that huge fund was required for manpower development, majority of which is done overseas.

He mentioned the upgrade of flight safety laboratory and flight data monitoring device, equipping of wreckage hangar and establishment of two regional offices in Kano and Enugu as some of the ongoing projects of AIB.

In his response, the Chairman of the committee, Hon. Chike Okafor promised to assist the bureau in resolving some of its challenges.

Okafor noted that the essence of the committee was to look at other avenues by which the Federal Government could make more revenues apart from oil, which he noted had been dwindling in recent time.

He posited that part of its assignment was to see how the committee could help the government to shore up its revenues apart from oil.

“Nigeria is about 80 per cent dependent on oil, which has crashed in recent time in the international market. Nigeria is in comatose and we all have to save the country from total collapse”, he said.

He however commended AIB for its cooperation with its advance team, which crosschecked its books for over a week.