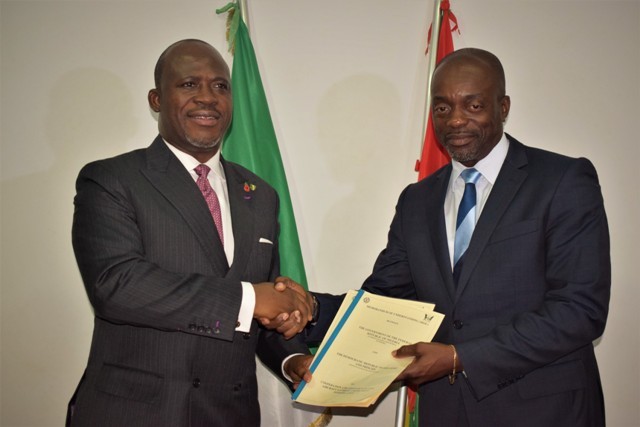 The Accident Investigation Bureau (AIB) in Nigeria has set another standard in the region as it ha released a timely and accurate air accident report in Sao Tome and Principe.

This is as a result of effective collaboration and corporation the Bureau has garnered in the last 24 months with the aviation stakeholders and the endless work by the Bureau’s investigators.

The Banjul Accord Group Accident Investigation Agency (BAGAIA) had invited AIB Nigeria to conduct an investigation into this crash, which by the International Civil Aviation Organization (ICAO) Annexe 13 is the responsibility of the state of occurrence.

This was very significant as for the first time in the history of Accident Investigation Bureau, accident investigation was handled by the Bureau on behalf of another state or a regional body.

The delegates visited the Nigerian Embassy and were received by the Charge De affaire, Mrs Faith. Ekwekwuo.She welcomed and appreciated the good job the Bureau did to have helped investigate the air accident and release of the final report. She also commended the Bureau for maintaining a good relationship with the Sao Tome authorities.

In the same vein, the Bureau came into terms and executed a Memorandum of Understanding with the Instituto Nacional De Aviaco Civil (National Civil Aviation Authority of Sao Tome &Principe) of the Democratic Republic of Sao Tome.  The agreement was in four parts – cooperation, capacity building, exchange of information on accident investigation and assistance in cases of any air accident within both countries.

This was a bid to further strengthen a good relationship and effective collaboration towards achieving a common goal in the air accident investigation sector in Africa.

SUMMARY OF AIRCRAFT ACCIDENT REPORT IS AS FOLLOWS

On 29th July, 2017 at about 0905hrs Antonov aircraft Model AN-74 TK-100, registered UR-CKC, owned by SWIFT SOLUTION FZC, operated by CAVOK Airlines LLC overrun runway 29 during a rejected take off at Sao Tome International Airport. The Captain, the First Officer, the Flight Engineer and 2 maintenance Engineers on board were rescued unhurt except the Flight Navigator who sustained an injury to his left foot and some minor bruises. The intended non-scheduled return flight to Accra was initiated in accordance with appropriate regulations. Visual meteorological conditions prevailed, and an instrument flight rules flight plan was filed.

The safety issues discussed in this report focused on rejected take-offs and rejected take-off procedures; compliance with SOP, other related checklists and manuals, flight crew training for RTO scenarios; flight crew performance, including the captain’s action to initiate an RTO after V1, and CRM.

Nine safety recommendations were made in this report and are addressed to:

The investigation determines that the cause of this accident was:

Due to the presence of birds on the runway, the take-off was rejected at a speed above decision speed V1, which was inconsistent with CAVOK’s Standard Operating Procedures (SOP).

The contributory factors to this accident include but are not limited to the following:

Failure of the crew to deploy interceptors (speed brakes/spoilers).

The omission of the take-off briefing in CAVOK’s Normal Operations checklist.

Should review its Rejected Take Off (RTO) training syllabus to incorporate robust RTO training plan for both initial and recurrent aircraft type simulator training and assessment to include unexpected scenarios and stop-and-go decision making.