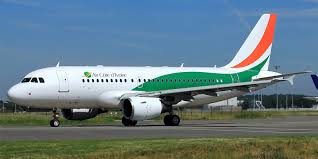 The airline says that by April 2016, the fleet would have been increased to nine.

Managing Director, Air Côte d’Ivoire, Mr. Rene Decurey, said the airline is achieving its target with the delivery of Bombardier Dash Q400 Aircraft which has enabled the airline increase regional and domestic route and frequency.
“Our new baby Q400 is as fast as a jet, flexible, silent, comfortable and energy efficient. It’s an aircraft that can operate both domestically and regionally”, he stated.

Bombardier Chief Operating officer, Mr. Alain Dugas, who delivered the aircraft, also said the aircraft was the right aircraft type for Air Côte d’Ivoire’s regional and domestic plan, adding that the Q400 interior is built to modern technology, with Air Côte d’Ivoire specification and taste to give passengers a brand feeling.

“With its excellent performance when operated from high altitude and high temperatures airports, the Q400 aircraft is the ideal device to operate from airports in the most difficult conditions. The device is also unbeatable for carriers seeking high productivity and profitability for a variety of connections”, he said.
He further stated that “the Q400 is becoming very popular on the African Continent, we have 16 operators of the Q400 in East and West Africa and we are glad Air Côte d’Ivoire has chosen the Q400”.

Côte d’Ivoire Minister of Transport, Mr. Gaoussou Toure, who chaired the occasion, praised the Air Côte d’Ivoire management team for achieving another step of the journey with the delivery of the new Bombardier Dash Q400.

“Today our Air Company Ivory Coast serves 22 capital cities in the sub-region, including 5 non-stop destinations and intends to move challenges to position itself as a reference for comfort, efficiency and customer satisfaction”, he disclosed.

Air Côte d’Ivoire effectively launched its operations on January 15, 2013 with a capital base of 25 Billion FCFA, with three aircraft and lifted total number of 244,183 passengers in and out of Abidjan.

Subsequently, in 2014 the airline’s turnover grew to 50 Billion FCFA with4 operational aircraft and passenger uplift number of 398,761.

At the end of 2015, Air Côte d’Ivoire turnover had risen to 76 Billion FCFA, with additional 2 aircraft and lifted 604,170 passengers.

By the of 2016, the Côte d’Ivoire national carrier would have acquired 2 additional aircraft in April and increase networks from 18 cities to 22 cities.

With a total of 9 air craft, the airline is expecting a capital increment of 65 billion to over 100 billion FCFA.

Mr. Rene Decurey stated that by 2018, the Airline would have been profitable, but to achieve this, new route must be opened and new planes must be bought.

With such growth and prospect, he saidthe airline has invested in training its own pilots and airplane mechanic with the partnership of INPHB and the Aeronautic institute Amaury of Grange (IAAG) and is currently training 15 pilots, and by 2018 would have 20 airplanes mechanics.

The Chairman of Air Côte d’Ivoire, General Abdoulaye Coulibaly, used the opportunity to thank all stakeholder for such an extraordinary growth.

“We are happy to see this remarkable growth, we thank the shareholders, especially the President, H.E, Alassane Ouattara for His strong will and determination for a national carrier, the minister of Transport, and also Air France who have been very supportive”, he said.