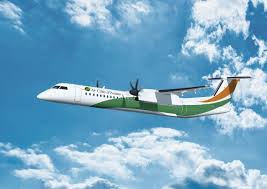 Ivorian national carrier, Air Côte d’Ivoire has received its third Bombardier Q400 from the Canadian manufacturer which will deliver a fourth aircraft by the end of April, according to signed contract.

This is only the first step in the process of renewal and reinforcement of the fleet of Air Côte d’Ivoire by the end of 2016 which should include nine aircraft.

In parallel, negotiations are underway with Airbus for the order of five new aircraft including three A319 and two A320.

These new aircraft will gradually replace the equipment operating in rent.

They will be equipped with the latest technology and offer exceptional comfort to customers. The company currently has eight aircrafts 8 composed of four Airbus A319, one Airbus A320 and three new Bombardiers Q400.

The recapitalization of the airline company from 25 to 65 billion capital should be effective before the end of January 2016.BOAD will also enter the capital of Air Côte d’Ivoire. The company intends to launch another increase to more than 100 billion at the end of 2016 in order to acquire substantial resources to support its development.

Remember that the airline serves 20 cities to date in West Africa and the Central Africa with frequent and direct flights on 70% of its network. After 2 1/2 years of activity, it ranks first among the airport Felix Houphouet Boigny actors with over 40% of traffic and a punctuality rate set at 85%.