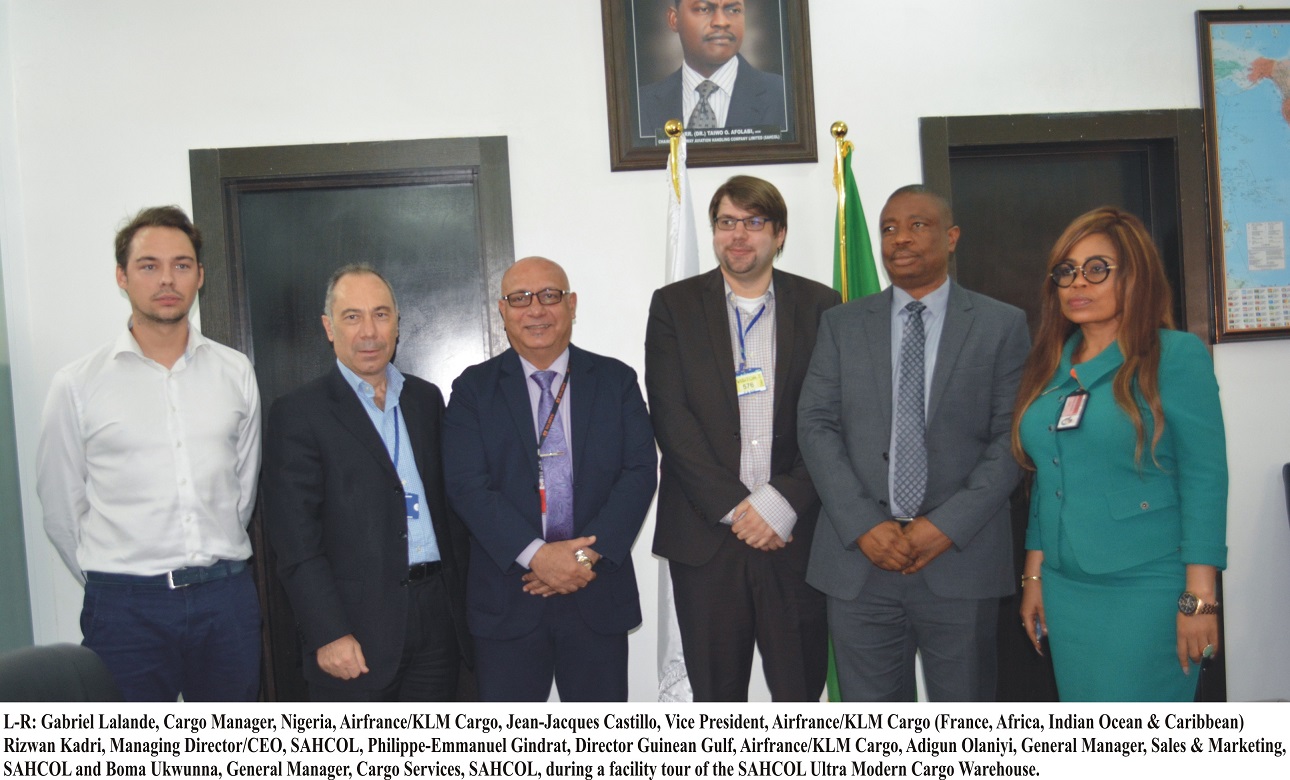 He was accompanied on the visit by Philippe-Emmanuel Gindrat, Director, Guinean Gulf (Ivory Coast, Burkina Faso, Niger, Ghana, Togo, Benin and Nigeria) Cargo and Gabriel Lalande, Cargo Manager Nigeria, as a follow-up to the recent relocation of the Air France-KLM Cargo to SAHCOL.

Jean-Jacques Castillo, who oversees over 64 countries where Air France-KLM operates to, sees the recent move by Air France-KLM Cargo operations to SAHCOL as a major step. He thanked SAHCOL for the support they have received so far.

Basil Agboarumi, SAHCOL spokesman said in a statement that the Vice President disclosed that Air France –KLM has a long history operating flights into Africa, promising that they will continue to build up their network into Africa.

He said they operate a daily flight to every main city in Africa, therefore hoped to continue to contribute in great ways to the development of the continent, seeing their presence in the African Market as quite strong.

Mr. Castillo, who stated that one thing which is number one to Air France-KLM is flight safety and that they have left the competitor to SAHCOL to develop and expand their operations. He stressed that Air France-KLM is in SAHCOL to stay as a result counting on the SAHCOL team to make it a success.

While responding, the Managing Director/CEO, SAHCOL , Rizwan Kadri assured the visiting Air France-KLM team that they have not made a mistake moving to SAHCOL, assuring them that SAHCOL has invested a lot to guarantee them satisfaction.

The team also took a tour through the import and export warehouses of SAHCOL, after which the visiting Vice President expresses satisfaction with the processes and facilities of the warehouse, and declaring that the SAHCOL warehouse ranked amongst one of the three best he has seen in Africa.

According tyo him, the Skyway Aviation Handling Company Limited (SAHCOL) was prior to December 2009, a struggling establishment of the Federal Government of Nigeria, having been rescued from the ashes of the liquidated Nigerian Airways.

“The fortunes of SAHCOL however took a turn for the better, after 2009, when the SIFAX Group led by its Executive Vice Chairman, Dr. Taiwo Afolabi (MON), bought over SAHCOL, in a keenly contested privatization exercise by the Nigerian Government Privatization Agency- Bureau of Public Enterprises (BPE).

“Today, SAHCOL stand out amongst its competitors as a great brand, having won its way to the heart of the Aviation Community, delivering Aviation Ground Handling Services in line with Internationally accepted best practices, having undergone and received the highest available International and local certifications, providing equipment and facilities that matches with the very best anywhere in the world. A further testament is recent movements of clients from competitors to SAHCOL”.

“SAHCOL was incorporated as an Aviation Ground Handling Service provider under the Nigerian Companies and Allied Matters Act of 1990. It is a fully Nigerian owned enterprise involved in Passenger Handling, Ramp Handling, Cargo Handling and Warehousing, Aviation security, Baggage Reconciliation, Crew bus and Executive Lounge services, and other related Ground Handling services for World best Airlines, originating within Nigeria and from various parts of the world.