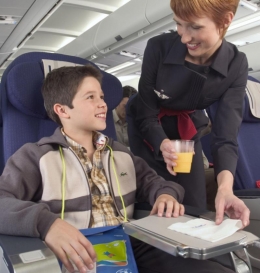 With the busy end-of-year holiday season approaching, Air France has everything planned to ensure its young travellers enjoy their trip to the full.

Sacks full of toys at the airport
From 18 December 2015, to celebrate the Christmas holidays, Air France is offering children travelling on its flights a selection of toys when they arrive at the airport.

On board, there are also surprises for children (games kits, card games to colour in, noughts & crosses, tangrams, etc.) to ensure they have a fun trip.

These surprises will be available throughout the holiday season on the entire Hop! Air France and Air France network on departure from Paris-Charles de Gaulle and Paris-Orly.

He will be handing out gifts and having his photo taken with children so they can leave with an unforgettable souvenir.

There will also be Christmas carols sung by the Air France choir.

Free wi-fi for KidsSolo
From 18 December 2015, youngest globetrotters travelling alone (KidsSolo) will benefit from free wi-fi access offered by Air France in partnership with HubOne at all UM connecting lounges at Paris-Charles de Gaulle and Paris-Orly.

Keeping in touch with the family all over the world has never been easier!
Once upon a time, Air France put kids in the spotlight
Air France does all it can to ensure its young globetrotters have an unforgettable experience.

There are specially designed products and services just for them, to ensure their trip goes smoothly for them… and their parents! Dedicated areas at the airport, special meals on board, a wide range of games, etc.

Young travellers are benefiting from the move upmarket of Air France’s entire range of products and services. Today, a new offer is available: Kids, for children traveling with their family and KidsSolo, for those travelling alone on an Air France flight.
Air France agents always take great care of all of them.

Every year, over 1.3 million children travel on Air France flights, including 410,000 babies and 285,000 un-accompanied children.