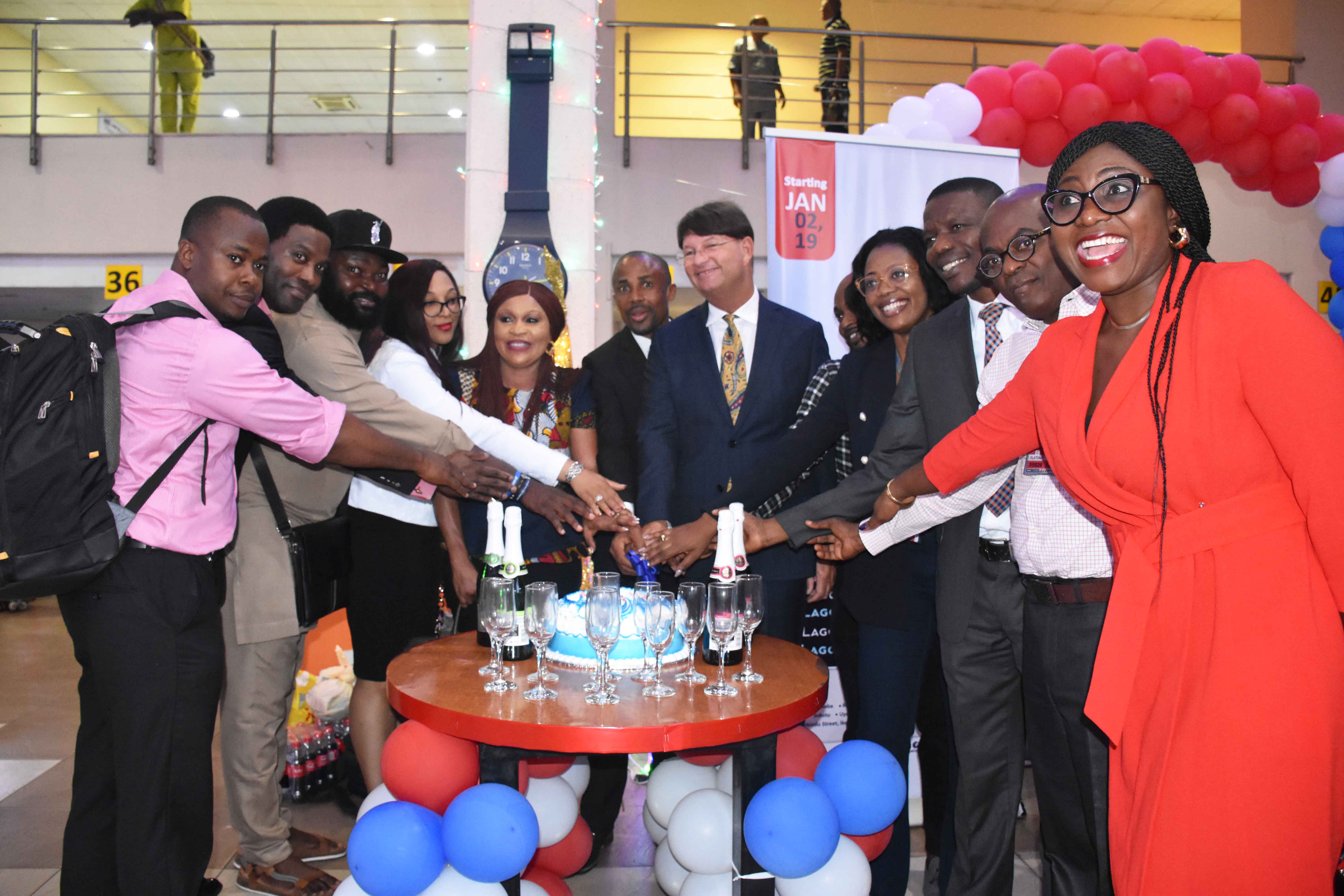 Air Peace and Bi-Courtney staff cutting the cake with passengers to flag off the airline’s flight operations at the Murtala Muhammed Airport 2 (MMA2), Lagos on Wednesday

West Africa’s biggest carrier, Air Peace on Wednesday delivered on its promise to commence flight services at the Murtala Muhammed Airport 2, Lagos, assuring that the extension of its operations to the terminal would afford it the right atmosphere to provide exceptional flight experience.

The carrier, which operates its domestic flights from its hub at the General Aviation Terminal (GAT) of the Murtala Muhammed Airport, Lagos, had promised to move its Lagos-Kaduna, Lagos-Asaba, Lagos-Akure, Lagos-Port Harcourt NAF Base and other flights under its subsidiary, Air Peace Hopper to MMA2.

The airline’s Embraer 145 jet with registration number 5N-BUV took off from the MMA2 enroute to Kaduna Airport at about 7.20 a.m. shortly after a brief launch ceremony witnessed by excited staff, managers of the facility, Bi-Courtney Aviation Services Limited (BASL) and air travellers.

Speaking during the inaugural flight from MMA2, Air Peace Corporate Communications Manager, Mr. Chris Iwarah said the airline was excited to deliver on its promise to move part of its operations to the facility. 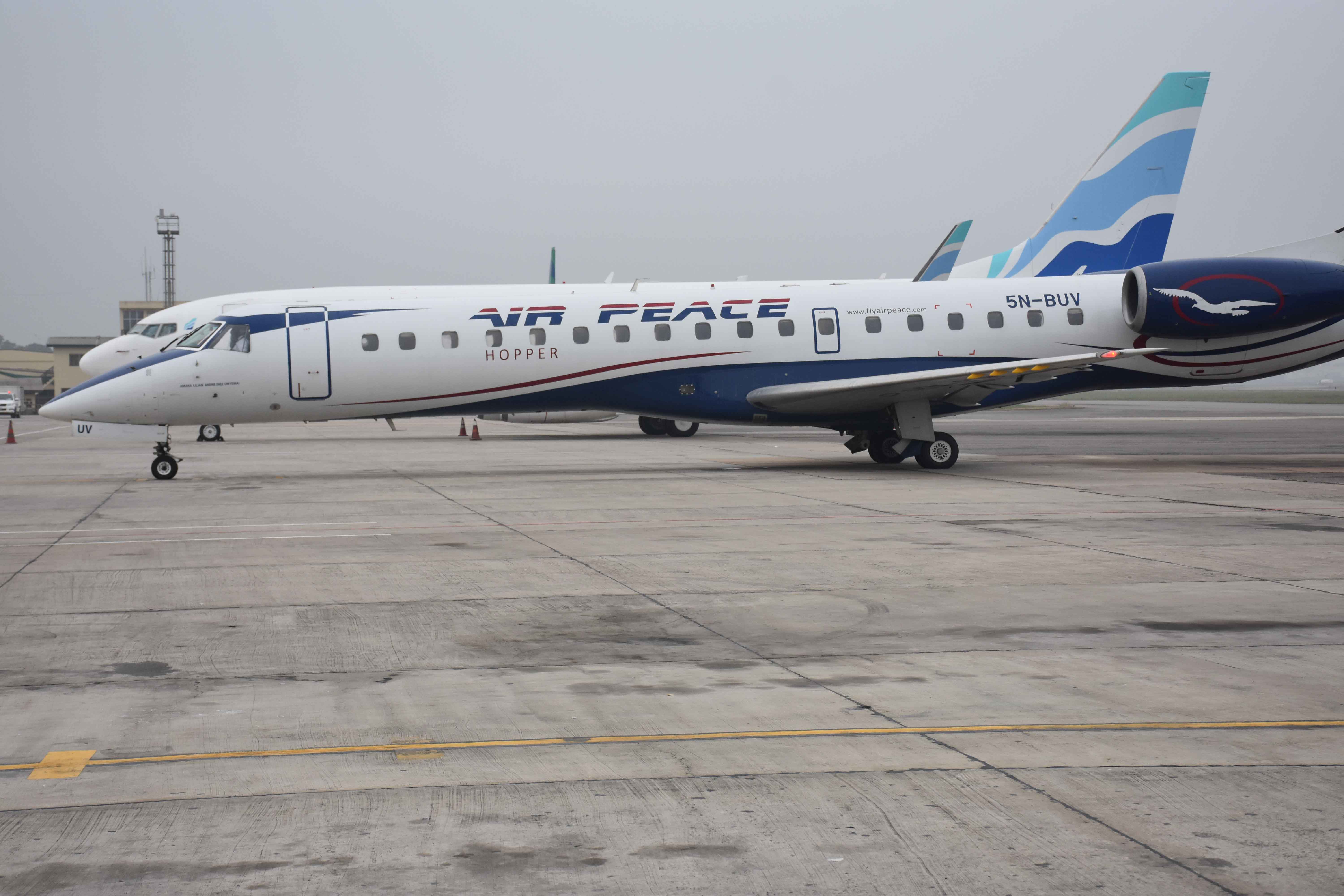 Air Peace Embaer 145 aircraft waiting for takeoff at the Murtala Muhammed Airport 2, Lagos during the commencement of the airline’s flight operations at the terminal on Wednesday

He described the MMA2 as one of the best terminals in the country, confirming that Air Peace would eventually move all flights under its subsidiary, Air Peace Hopper to the facility as part of its strategy to position itself for better service to its customers and deepen its no-city-left-behind project.

“We are quite hopeful that the expansion of our Lagos base to MMA2 will afford us the space and convenience to deliver first-class flight experience to our loyal customers. As a customer-oriented carrier, it is only strategic that we seek a better operational atmosphere for seamless passenger facilitation and exceptional customer service experience.

“This exactly is what MMA2 offers with its state-of-the-art facilities and we are indeed proud of our decision to annex it to our Lagos hub,” he said.

For his part, the Group Executive Director of Bi-Courtney Aviation Services Limited, operator of MMA2, Mr. Rodger Whittle assured of excellent passenger facilitation and experience at the facility.

He said: “It is very exciting for us that Air Peace has come to MMA2 and we can now happily say that all the airlines in Nigeria operate from the MMA2. It is a fantastic thing for the operator, it is a fantastic thing for the MMA2. It brings the destinations of MMA2 to 24. Air Peace is bringing Kaduna, Akure, Asaba as well as Port Harcourt NAF Base.

“This terminal will really offer a wonderful set of services to Air Peace customers. It adds tremendous value to the Air Peace proposition and it adds great value to the travelling experience of the customers. 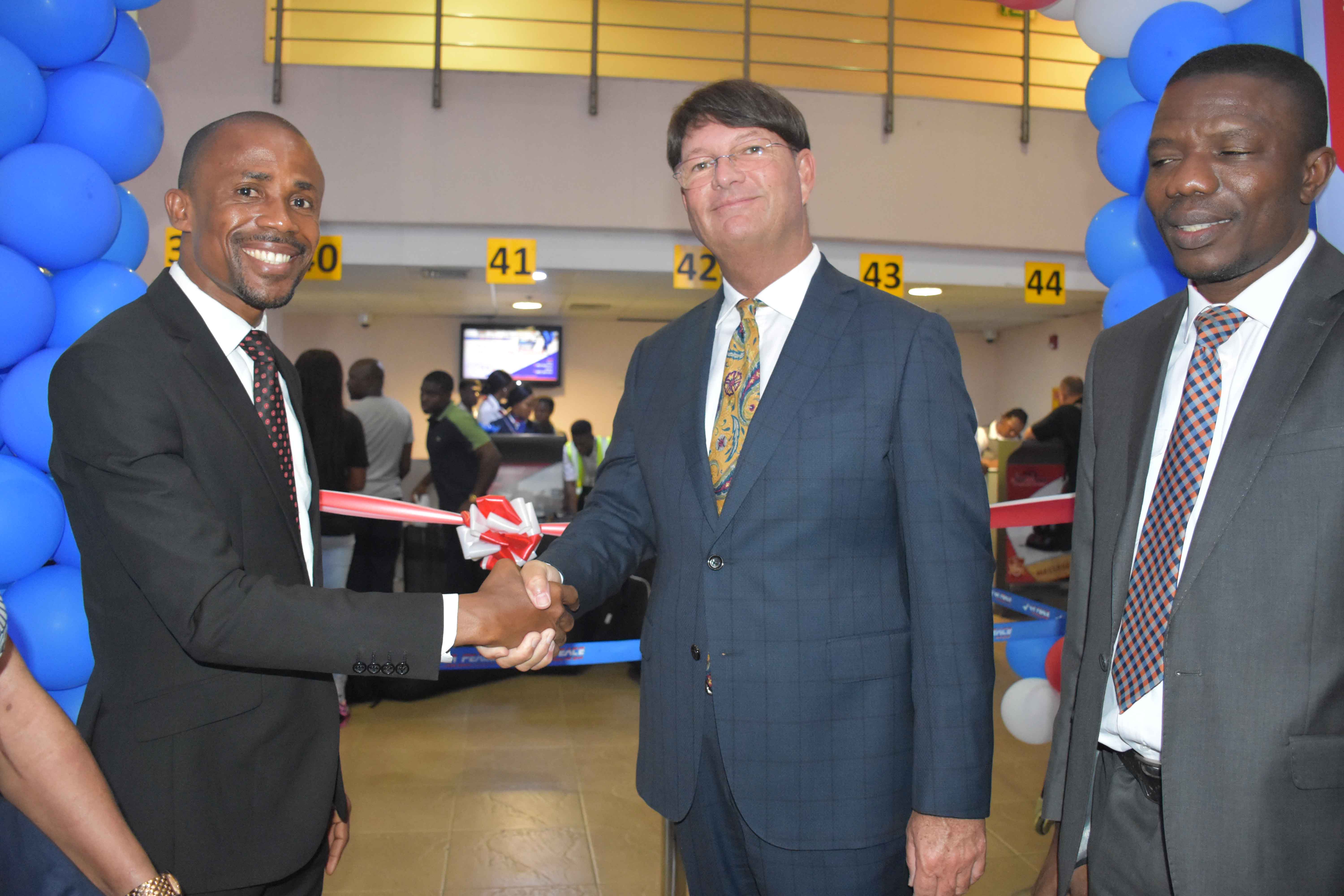 Air Peace Corporate Communications Manager, Mr. Chris Iwarah in a handshake with the Group Executive Director of Bi-Courtney, Mr. Rodger Whittle moments after flagging off the airline’s flight operations at the Murtala Muhammed Airport 2 (MMA2), Lagos on Wednesday, while the Head of Aeronautical Services, Bi-Courtney, Mr. Raphael Uchegbu looks on

“In terms of customer experience, we are able to offer a lot more. We have the comfort and convenience of the terminal, we have electronic technology, we have jetways and direct access to the aircraft for passengers, which is a very good thing.”

Also speaking, Head of Corporate Communications, MMA2, Mrs. Eniola Ade-Solanke said the terminal had the capacity even for regional operations and was attracting major airlines through the provision of excellent passenger experience.

“We have the capacity, we have the resources and we have the facilities for their safety, security and comfort. The MMA2 is more than just a terminal because of the services we provide to users. We have a multi-storey car park, we have restaurants, we have banks and other businesses here that improve their traveling experience,” she said.