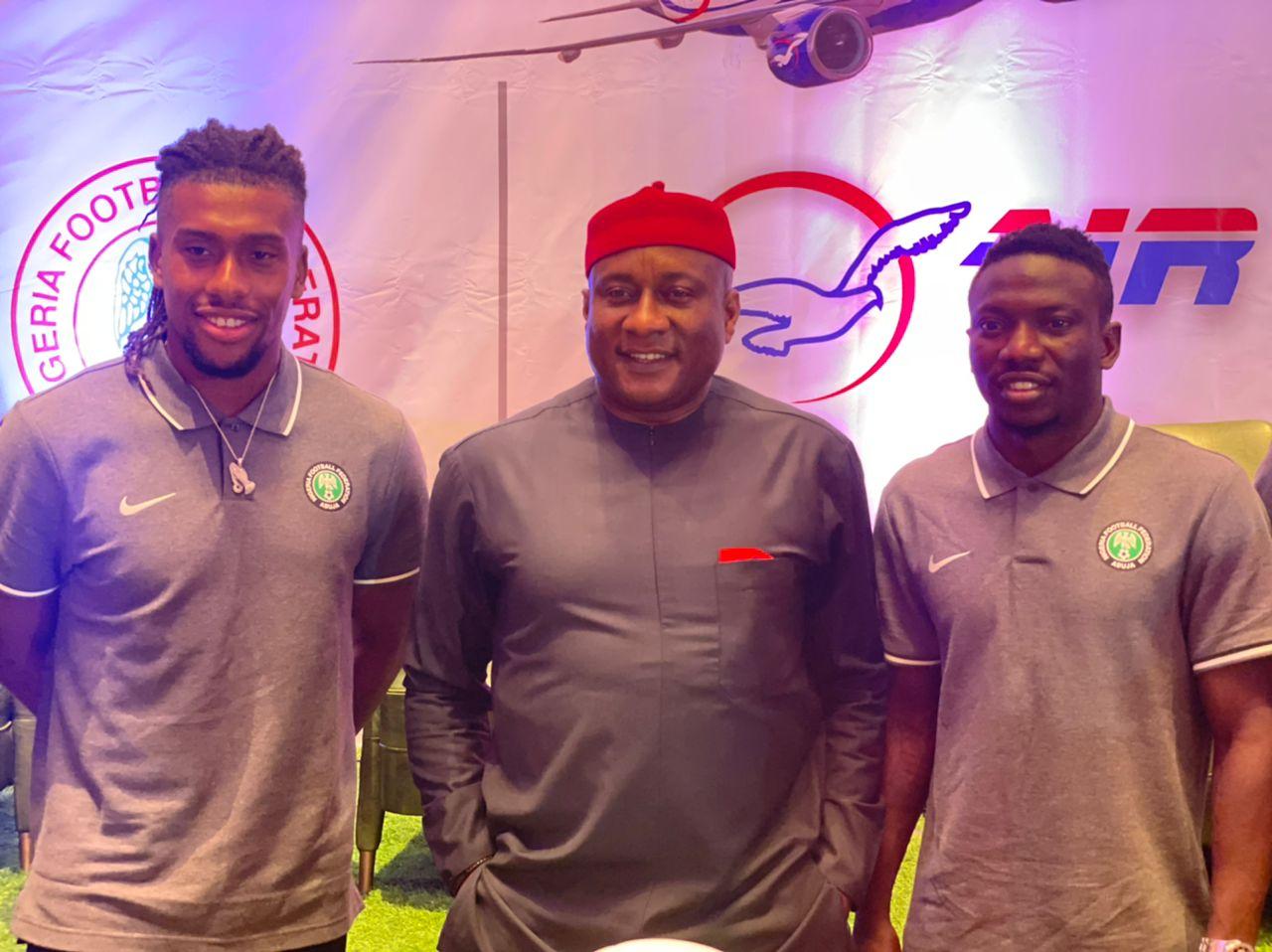 Allen Onyema (middle), flanked on the left by Alex Iwobi and on the right by Ognenekaro Etebor at the unveiling of the partnership between the airline and NFF recently

The Chairman of Air Peace, Allen Onyema, has harped on the unifying power of sports and urged the Super Eagles to unify Nigeria through the instrumentality of football, as the team gears up for their next encounter with Cape Verde preparatory to the World Cup in Qatar.

Onyema gave the charge Monday morning on board Air Peace brand new Embraer 195-E2 aircraft airlifting the players to Cape Verde for their next match from the Murtala Muhammed International Airport, Lagos.

He stated that Air Peace was very happy to be associated with the team, adding that the favour which God granted Air Peace is now following the team, and this was reflected in their victory against Liberia on Friday.

“You won your first match resoundingly and we expect that the next one happening in Cape Verde in 24 hours time, will not be different”, he affirmed.

Stressing sports as a medium of unification, Onyema hinted that Air Peace threw its weight behind the national teams to restore hope in Nigeria, especially at a time where the nation is in distress.

“Gentlemen, why I decided to come to the airport at this time of the night by 2am to address you is because of this, you are not just going to play a football match, you’re going to carry on your young shoulders the aspirations and the hope of a nation almost in distress.

“A lot of people expect that this is the beginning of the peace and the unity and oneness we want in our nation Nigeria. We don’t have any other nation. The international community is envious of our nation. I want you to, please, go out there and shine for your nation.

“When you were playing on Friday, everybody jettisoned their ethnicity. The people in South-East were clapping, the people in the North were clapping, the South-South also were clapping. I almost shed tears when Ahmed Musa was called in during the second half. Majority of the spectators at the Stadium were southern Nigerians but when the name of Ahmed Musa came up, a Kano indigene, the stadium roared up for joy, people were hailing, Nigerians stood up for him.

The airline boss, who promised to splash 20 million naira on the players if they win their Cape Verde match, emphasised that qualifying for the World Cup would open another opportunity for unifying Nigeria, adding that ‘I want that nationalistic zeal to burn in all of you and in all you do. Go out there and shine for your nation’.

“So, you are going out there not just to win a match but to win souls, to encourage the nation to be together. We need unity now more than ever”, the patriot asserted.

Acknowledging our differences as a people, Onyema said Nigeria is a great country with so much potential, and with oneness and love, Nigerians can surmount all challenges facing the nation.

“Yes, there may be injustice all over the place but these things could be addressed. They can be solved, addressed in love and with love”, the Nonviolence proponent said.
###