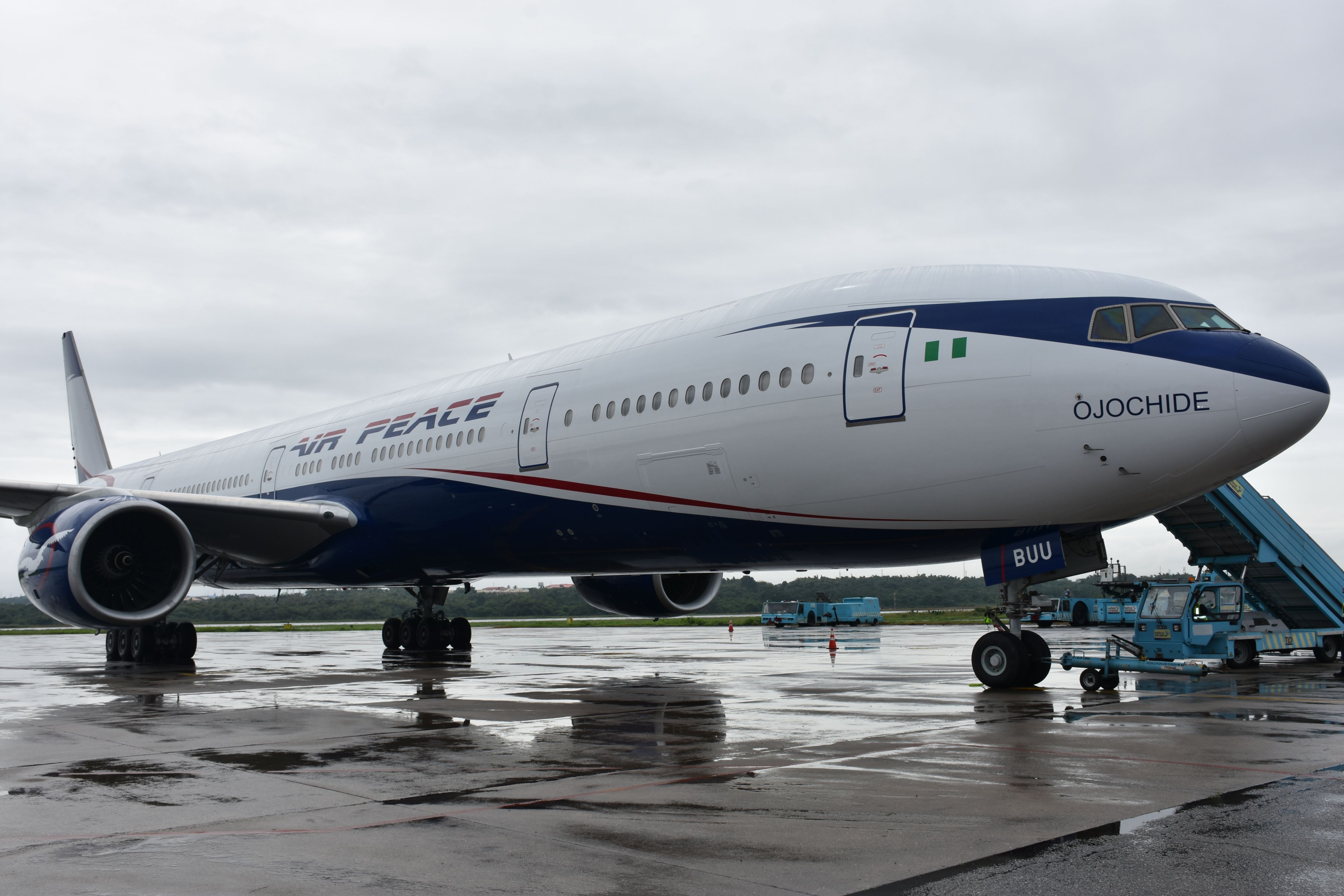 Air Peace second Boeing 777 after taxiing to a stop at the Murtala Mohammed International Airport, Lagos on Saturday

The airline said ‘he spoke with a national newspaper on the operations of domestic airlines and was quoted as saying: “Something could be wrong with the decisions of those Nigerians in choosing outright buying (of aircraft).

“Believe it or not, it is a clever way for capital flight. Imagine an airline with two B777 paid for outright without designated routes! The cost of each of these aircraft is not less than $150 million.

“Even if the routes are certain, a better option would have been wet lease of about six months that would allow Nigerians to be trained, transferred to the aircraft and thereafter converted to dry lease for another six months. If the routes are unprofitable, the airline can go for outright purchase.”

But reacting to the comments in a statement issued by its Corporate Communications Manager, Mr. Chris Iwarah, Air Peace said Ojikutu’s position was an ‘undisguised attack on its image as a responsible corporate citizen working flat out to contribute to Nigeria’s economy and do the nation proud through efficient domestic, regional and international air services.

The airline dismissed Ojikutu’s views on outright purchase of aircraft and the option of wet lease as a product of ignorance and envy. Air Peace recently took delivery of its second Boeing 777 aircraft for its planned long-haul operations.

“While we have no problem with people expressing differing opinions on the airline business, we find it quite irresponsible for Ojikutu to allege that our decision to make Nigeria proud with the recent acquisition of two Boeing 777 aircraft was a ‘clever way for (sic) capital fight.’ This is a deliberate attempt to present us before members of the public as a fraudulent organisation working to sabotage and subvert the current efforts of the Federal Government to place the nation’s economy on a sound footing. Even worse, he claimed that a Boeing 777 is sold for no less than $150 million. Nothing can be further from the truth. And it is quite disappointing that a self-proclaimed aviation expert can make this kind of ignorant guesswork in an era where proper information is just a click away. It is no longer a secret that the so-called security expert has put himself at odds with the success of Air Peace and in satisfaction of his desire to bring domestic airlines down for his foreign paymasters and collaborators to continue to pillage the economy of our dear nation.

“It is elementary knowledge that the option of wet lease has brought a lot of Nigerian airlines and their counterparts elsewhere down. We begin to wonder the motivation for Ojikutu’s comments. When Air Peace went public with the number of aircraft in its fleet, the same so-called security expert doubted it and tried in vain to discredit us as purveyors of falsehood. Now that the aircraft are coming in, he is changing the rhythm of his attacks.

“Not for once has he congratulated Air Peace on its feat in the Nigerian aviation industry for obvious reasons. The success of Air Peace signals the end of the ‘undertaker’ job for Ojikutu and his co-travellers. All they do is rubbish anything Nigerian and move on to pass themselves off to foreign airlines as consultants for filthy cash to line their pockets.

“We reaffirm our resolve to end the domination of our airspace by foreign carriers at the detriment of Nigeria’s economy. Contrary to Ojikutu’s claim, we have trained a lot of Nigerian pilots and engineers on the operation of the Boeing 777 aircraft and we would continue to do so as we expand our operations.

“But for crass ignorance, Ojikutu should have known that the aircraft an operator wishes to use for its regional and international operations is part of the items that must be made available before such airline could apply to operate into such destination. It is also the height of mischief for Ojikutu to pretend not to know that the Federal Government has since designated Air Peace to operate flights to Houston, London, Dubai/Sharjah, Guangzhou-China, Mumbai and South Africa.

“We warmly welcome Ojikutu and his like to set up their own airline and put their baseless theories into practice. While we would not stop them from moving from one office to another seeking consultancy contracts, we urge them to stop peddling ignorance, refrain from making baseless comments about the aviation industry they know nothing about and confine themselves to their guard duties, where their knowledge is also suspect,” Air Peace said.