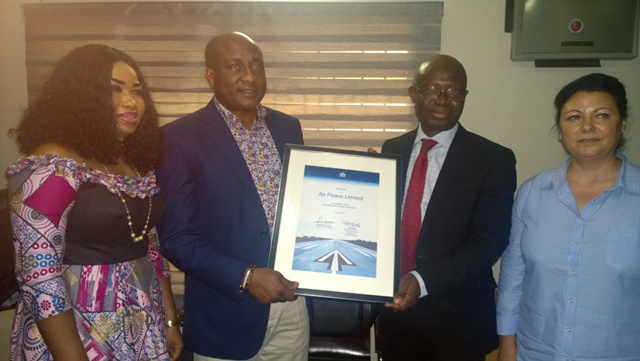 Chairman/Chief Executive Officer of Air Peace, Mr. Allen Onyema, has assured that the carrier will continue to insist on safe and exceptional flight services.

Onyema made the pledge during the official presentation of the membership certificate of the International Air Transport Association (IATA) to Air Peace in Lagos, saying the airline had distinguished itself in the Nigerian aviation industry on account of its managerial integrity and uncompromising adherence to the global requirements for safe flight operations.

The carrier’s membership of IATA, he added, would greatly boost its drive to further expand to the West Coast of Africa and connect international routes, including Dubai, Houston, London, Mumbai, Guangzhou-China and Johannesburg.

Air Peace, he confirmed, had increased its fleet to about 24 aircraft to cater to its plan to begin flight operations to nine West African countries and six international destinations.

Speaking on the rigorous process Air Peace went through before securing its IATA Operation Safety Audit (IOSA) certificate and IATA membership, Onyema urged other countries to stop frustrating Nigerian airlines from operating into their domains on the basis of aero politics.

He wondered why some countries would impose impossible conditions for Nigerian airlines to operate into their domains when the carriers had passed all global assessments for international flight operations.

He said: “Air Peace has not been stopped (from flying outside Nigeria) yet, but I have seen others. A lot of foreign airlines do not want Nigerian airlines to succeed. It has to stop. If it continues I will go to court because they cannot be coming into our country and prevent us from flying into theirs.”

He insisted that Nigerian airlines deserved to also benefit from the open skies arrangement foreign airlines had capitalised on to expand their operations to the country.

Onyema said Air Peace and other Nigerian airlines that had been certified by IATA after passing the required safety and security audits should be accorded respect like their counterparts across the globe.

He commended the staff of the airline for working relentlessly to “position Air Peace as Nigeria’s preferred airline and deliver exceptional flight services to the public.”

The carrier, Onyema added, was grateful to its customers for accepting and supporting it to become the leader of the Nigerian airline business.

For his part, IATA’s Area Manager, South-West Africa, Dr Samson Fatokun, who presented the membership certificate of the global aviation body to Onyema, commended Air Peace for making the list of airlines in the IATA membership registry. Only about 300 carriers of the thousands of airlines operating globally, he said, were listed in the association’s registry because of the stringent admission process.

“We have requirements for any airline that wants to belong to the IATA brand and one of that requirement is that they must pass the IATA Operational Safety Audit (IOSA) and this has kept most of them back. IATA comes with a requirement of quality and people expect the airline to operate with recommended standards of aviation globally,” he said.

Fatokun affirmed that with the certification, Air Peace had been given the leverage to become a global player in the aviation industry.