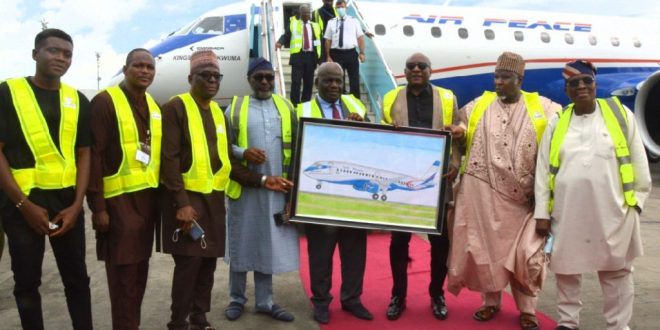 Air Peace, on Thursday, took delivery of the fourth of its initial 13 E195-E2 aircraft ordered from aircraft manufacturing giant Embraer and has said the new equipment improves the economics of the airline by reducing operational cost.

This is just as the Nigeria Civil Aviation Authority ( NCAA) commended the airline for its acquisition of brand new aircraft asking others to follow suit as it would develop the industry.

The aircraft, Kingsley Chukwuma Onyema with registration marks 5N-BYI which arrived from the Embraer facility in Sao Jose Dos Campos, Brazil was welcome with a water canon salute at the Nnamdi Azikiwe International Airport, Abuja.

Chairman/Chief Executive Officer of Air Peace, Chief Allen Onyema who was on ground with members and executives of Airline Operators of Nigeria ( AON), said the aircraft were bought to further improve safety, save fuel, improve operational cost.

Onyema said,” From 2018, we made a commitment to acquire brand new aircraft to replace our fleet. I am not saying our aircraft is unsafe but because of the economics of the game. The Embraer will aid save fuel and reduce operational cost. It’s not about age, it’s about maintenance but a brand new aircraft takes safety to a new level. The aircraft is configured for 148 passengers but we are Air Peace made it 124 to give passengers what they deserve: safety and comfort.

He also said the Embraer E195-E2 was a calculated buy because it was bigger than the Boeing 737 but had a technology so advanced it can land and take off on the shortest of runways stressing the Embraer is being flown into airfields like Warri etc.

Also speaking the Director General of the NCAA, Captain Musa Nuhu commended the airline and stressed that Air Peace is not just procuring new aircraft but appropriate aircraft for operations.

“It gladdens my heart that Nigerian airlines are not only getting new aircraft but are getting the right aircraft. The connectivity in Nigeria has improved and it’s getting better. These new aircraft have low maintenance and operational costs and are environmental friendly.

“This is the way to go. I believe with time, Air Peace will change all it’s fleet to newer ones.

“Pre-covid, 10 to 12 million passengers passed through the country’s airports, which amounts to 10 percent of the country’s population. Airlines need to connect different parts of the country for trade, thereby contributing to the country’s GDP. The airline industry is growing and those surviving are expanding their fleet”, he stated.