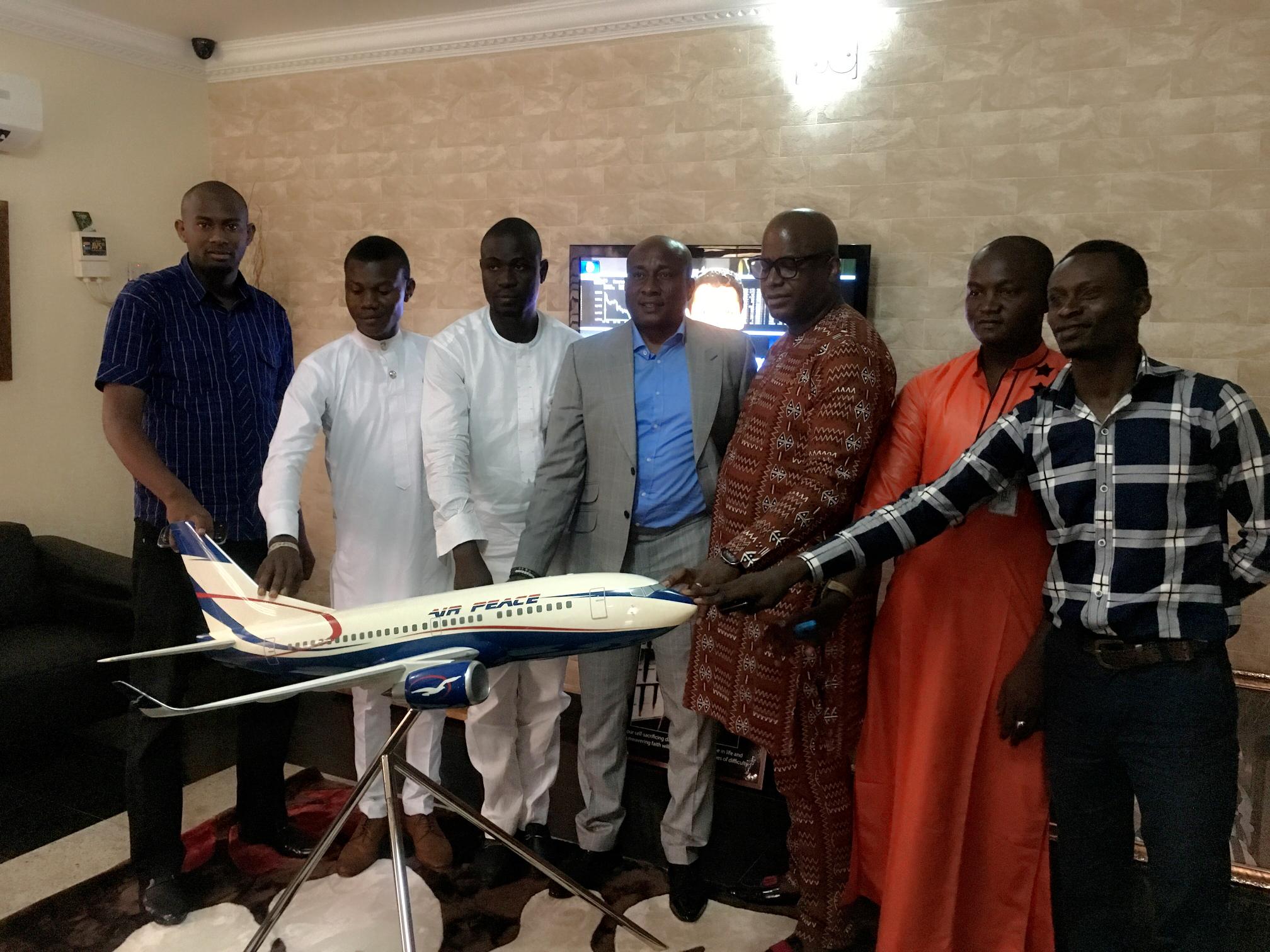 Chairman/Chief Executive Officer of Air Peace, Barr. Allen Onyema (middle), Senate President of the National Association of Nigerian Students (NANS), Comrade Salam Oyejide (3rd left), other executive members of NANS and the Grand Patron of the association in Akwa Ibom State, Mr. Ubong King (3rd right) placing their hands on Air Peace’s model aircraft to symbolise their endorsement of the airline as the official carrier of Nigerian students during their visit to the corporate headquarters of the airline in Lagos.

Chairman/Chief Executive Officer of Air Peace, Barr. Allen Onyema has announced a package of over N300 million to train 52 executive members of the National Association Nigerian Students (NANS) in non-violence education in Nigeria and at Emory University in the United States.

Onyema disclosed this when the Grand Patron of NANS in Akwa Ibom State, Mr. Ubong King and leaders of the students’ body visited the corporate headquarters of Air Peace in Lagos on Monday.

The airline, he added, would also henceforth fly leaders of NANS and all other categories of students to school on resumption and out of school on vacation for a flat fare of N18, 000.

He said the airline was offering a fare much better than the 15 percent discount the students sought because of its belief in the youths’ capacity to transform the country.

Onyema praised the executives of NANS for pursuing issues relating to the country’s well-being without ethnic considerations, saying the nation needed a pool of focused, detribalised and non-violent youths to drive its development agenda.

He urged NANS executive to regard the opportunity offered by the airline to train them in non-violence education with seriousness, saying they were expected to return to the country as non-violence experts to support the campaign for peace his not-for-profit organisation, the Foundation for Ethnic Harmony in Nigeria (FEHN) had championed for many years.

“I like being in the midst of youths who are detribalised in their struggles. Let no one use you to foment trouble. In 2004 when there was militancy that greatly affected oil production in the country, I used FEHN to fight the crisis and a lot of the militants were transformed. I have used FEHN to fight ethnicity in the country for many years. What gives me joy is broad nationalism and not ethnic and divisive nationalism. What we need in Nigeria is broad nationalism,” Onyema said.

He commended Ubong King for his tireless effort to work for the nation’s good and stand for what was right.

“Ubong, he enthused, “may not be a governor or president, but he is one Nigerian I have a lot of respect for. He is somebody you can be proud of.”

He said Air Peace had been endorsed as the official airline of Nigerian students, appealing to the carrier to grant students a 15 percent rebate on all fares. The rebate, he said, would afford students the opportunity of enjoying the safe flight services of the airline.