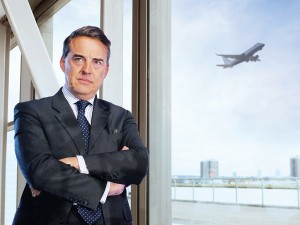 Alexandre de Juniac, Chairman and Chief Executive Officer of the Air France-KLM Group, has informed the Group’s Board of Directors of the proposal he has received on the 5th of April 2016 from the Board of Governors of the International Air Transport Association (IATA) to become the next Director General and CEO of this global organization.

Alexandre de Juniac indicated he would accept the proposal, which is due to be discussed at the IATA General Meeting (1-3 June 2016).

Funmi Ojesina, Air France spokesman in Lagos said in a statement that the Air France-KLM Group’s Board of Directors has prepared a plan to appoint a successor to Mr. de Juniac given his imminent appointment as the IATA Director General and CEO, from 1 August 2016 at the latest.

According to the Air France-KLM Board’s internal rules, the Air France-KLM Appointments and Governance Committee – with the help of an international recruitment consultancy – has initiated the process of identifying the best executive able to continue the Group’s consolidation and development.

Members of the Air France-KLM Group’s Board of Directors would like to pay tribute to the outstanding work of Alexandre de Juniac in achieving the Group’s economic and financial recovery, enhancing its range of services and winning back customers.

The Air France-KLM Board is delighted that these accomplishments have been recognized in the confidence of the IATA Board of Governors’ recommendation for Alexandre de Juniac to lead their global association.

Alexandre de Juniac will be the first person coming from a French airline to lead IATA.

“I would like to thank all those at Air France-KLM who for almost 5 years now have been fully committed to achieving together our recovery and restoring the conditions for growth. Working for Air France-KLM is a source of great pride.

“ I will continue to fulfil my responsibilities until I hand over to my successor at the end of July, and I will continue to defend air transport and all airlines – including Air France-KLM – in my new role. On the strength of the skills of its teams, the prestige of its brands and of its European roots, Air France-KLM has all the qualities it needs to compete with the world’s leading airlines” Mr. de Juniac stated.