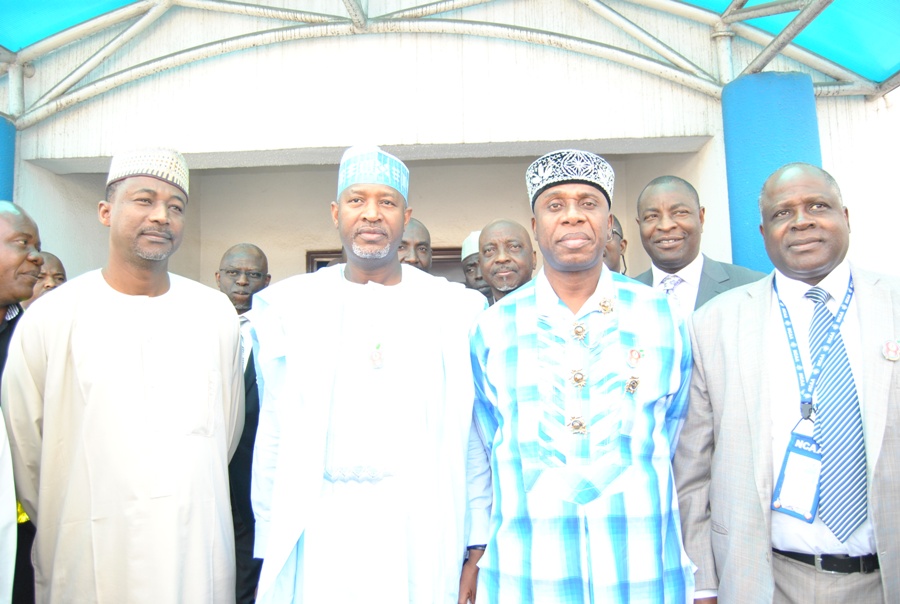 Rotimi Amaechi, Minister of Transport on Tuesday, hailed Aviation agencies for their installation of safety equipment, such as e-clearance for aircraft across the country.

Amaechi was in company of the Minister of State for Aviation, Senator Hadi Sirika, stated this while he touring facilities at the Murtala Muhammed Airport, MMA, Lagos.

While watching the presentation of the e-clearance processes for aircraft by officials of the Nigerian Civil Aviation Authority (NCAA) and the Nigerian Airspace Management Agency (NAMA), he said such was timely especially in an era that people are time and security conscious, adding that it will also go a long way in helping the Agencies generate more revenue.

Amaechi explained that so far, the agencies’ Chief Executive Officers, CEOs, with the little amount of money they generate, had been prudent with the acquisition of safety equipment, which had improved safety and security at airports.

The minister however frowned at the level of decay noticed at the Nigerian Maritime Administration and Safety Agency, NIMASA, which he said investments on ground could not be compared with revenue generated.

Amaechi added that with what was showed him and others, aviation in Nigeria had grown from the past of paper clearance to electronic clearance and could compete with its counterparts anywhere in the world.

He explained that with the migration to e-clearance , the industry would earn more revenues while less time would be used to process clearance by airlines.

“With what I have seen here today, it shows that Nigerian aviation industry can be compared to any developed ones anywhere in the world. This is unlike in the past where you waste time processing papers.

“I remember my experience at Akure Airport, which was sordid. The Airport Manager, a woman came to me and said the airport was technically closed. But, I believe that didn’t happen to me alone as it equally affected others too.

“But, with this software, you can manage your time better and earn some revenues for yourself. The government should be commended for what it has done recently. What we saw in NIMASA was nothing to write home about when you compare the money they earn and the facilities you see on ground”, he said.

Earlier the Director-General of the NCAA, Capt. Muhtar Usman promised that the agencies management would continually drive the government’s vision of improving facilities.

Usman declared that as the regulator, NCAA had to continually amend its regulations, which it recently did with the Nigerian Civil Avuation Regulatuons, NCARs,

He added that the need to deploy technology to its clients could not over-emphasised, stressing that before the adoption of the aircraft e-flight clerance, clearance was done manually, but said it had collaborated with NAMA to ease clearance for airlines.

He recalled that Nigeria recently passed two audits; the American Federal Aviation Administration, FAA, Category One Status and the International Civil Aviation Organization, ICAO, Security Audit, which it scaled with 96 per cent.

He informed the minister that the industry was preparing for another safety audit in the first quarter of 2016 and assured that the country would scale the audit.

” We are prepared for another audit, which I assure you, sir that we will scale through as we have prepared very well for this, just as we did in the past,” he said.

The team also visited AIB, NCAA and other facilities within the airport.