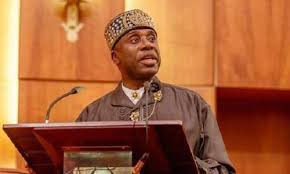 Amaech sets the ball in Transport

” … leadership courage, within or outside governance , transfers back to, and animates follower, so that when a familiar voice is heard saying “Let us march,” it finds the followers not merely ready, but miles ahead.”    Wole Soyinka

Since assuming office as Minister of Transport, Rt Hon Chibuike Rotimi Amaechi has left no one in doubt about his quest to surpass his indelible footprints as Rivers State Governor where he earned his place as first among equals in the committee of State Executives.
For a man who draws admiration for always driving himself, steering the wheels of land, water and air is a familiar terrain.
In appreciating the enormity of the task ahead, he said “the transportation sector holds the key to any economy and forms the basis of all socio-economic interactions.”
Following his tour of agencies under his purview alongside the Minister of State, Aviation, Sen. Hadi Sirika, Amaechi was emphatic; “The contribution of the transport sector to the Gross National Product is an unacceptable 1.41%. For a sector that plays a major role in the nation’s development, there is an urgent need to exploit the opportunities that abound within the sector to improve its contribution to the national economy.”
From the boat ride from the Nigeria Ports Authority headquarters in Lagos, Marina, to the Tin Can Port across the Atlantic Ocean, the Ministers saw vast potentials in the sector, insisting that we can, like South Korea and Singapore, build our economies around a vibrant transportation sector.
From the Shippers Council in Apapa to the train ride at the Railways headquarters, the narrative is reinforced; “Although Nigeria is blessed with multiple modes of transportation that is the envy of many, these potentials have largely remained untapped.”
By the time the team arrived the Murtala Muhammed International Airport, Lagos, the picture was complete; “Our air transport and railways sub-sectors hold the key to unlocking the vast potentials in our cities and rural areas.”
Following the tour of the flagship airport in Lagos which took a whooping eight hours, he had this to say;
“I am impressed by what we have seen. When people express dissatisfaction with the airport they are looking at the terminal only but there are a lot of things that have been achieved to make aircraft fly safely.”
Many are want to ask, what must have elicited such commendation from a sector bedevilled with briefcase stakeholders who have built an empire from rehash of half truths?
The duo of Rt Hon Amaechi and Sen. Sirika who insists on seeing things first hand toured the aviation facilities extensively, often times breaking the itinerary to make unscheduled stops at the terminal basement, conveyor belts, escalators and the toilets.
The team were treated to a fine mix of modern technology and human expertise by the aviation agencies and private sector operators.
At the end of the three day tour, he hit the nail on the head:
“The Buhari administration is determined to fully exploit the potentials in the transportation sector with a view to enhancing national integration by encouraging mass transit of passengers and goods between and across the geographical regions of the country.”
The milestones were clear, safety is priority.
The expeditious completion of ongoing airports remodelling projects in Lagos, Abuja, Kano and Port Harcourt and the decongestion of airport access roads will be prioritised.
The Railways and Marine sub-sectors will be reinvigorated. The movement of petroleum products by rail will be re-introduced in 2016
and the clearance of good at the ports will be within 48 – hours time period.
These visions appear larger than life to the uninitiated, but to the Lion of the Niger Delta it’s yet another river to cross.
According to Magnus Abe, “if one must summarise the story of his life in three words, those words would be service, activism and compassion. ”
“Amaechi keeps to his word. His firm conviction that a man is as good as his word has led him into and through many travails in his life and no matter the personal sacrifice and pain, he tries to stand by what he had agreed to, no matter whose ox is gored, sometimes including his own ox”
These testimonials from Sen. Magnus Abe who sojourned with Amaechi as a State legislator, SSG and Distinguished Senator over a span of two decades confirms that Rt Hon Chibuike Rotimi Amaechi walks the talk.
Tighten your seat belts!