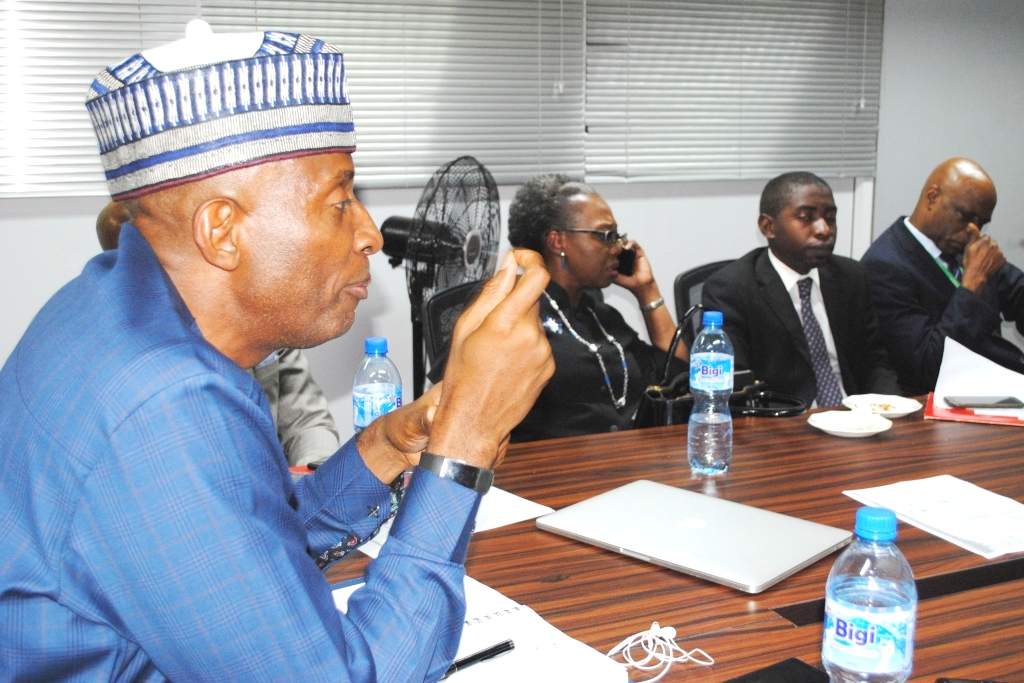 Arising from its meeting of Airlines’ CEOs, the body said it has become absolutely imperative for it as a body to address the nation on some of the debilitating issues affecting the well-being of the aviation industry in Nigeria.

The statement as read by Nogie Meggison, Chairman, AON

Over fifty indigenous scheduled airlines have existed in this country but only seven are flying today. The mortality rate of airlines in Nigeria is exceedingly high. The owners of these defunct airlines have all been success stories in other business endeavours but not in aviation. Could all of them have been responsible for the failure of their airlines? The answer is ‘NO’. Rather, it is the myriad of unfriendly policies and the very harsh operating environment that have been the bane of the growth of aviation in Nigeria.

We are very mindful that if these issues and policies are not addressed urgently, the remaining airlines would definitely become defunct in no time! We also are very mindful of the impact of this unwanted development on the socio-economic situation in the country. We are even more mindful of the fate of the thousands of workers who depend on these airlines for their livelihoods. What would happen to these workers? They would be joining the already bursting teeming population of the unemployed in our nation.

Job creation is the hallmark of any successful government hence we are calling on the government to save this industry, not for the airline owners, but for the millions of people whose lives are directly and indirectly positively impacted daily by these airlines. We believe the Buhari government would not fold its arms and watch entities that create job opportunities for its citizenry die.

We as AON have been crying out for decades now, but have been barely heard.

We have to state herein that we commend the efforts of the Minister of State, Aviation for his efforts in getting some of these debilitating issues addressed for the growth of the industry. It was him who fought for the airlines to be accorded the foreign exchange window by the CBN. He also interfaced with Ministry of Finance to address the issue of Customs Duty Waiver for commercial aircraft, aircraft engines and aircraft spares. However, there is so much he could do in his Executive capacity as the Minister, as some of these issues are equally Legislative in nature.

It is noteworthy that a Presidential Task Force was set up in August 2017 to look into these issues and come up with recommendations. To date, ten (10) months later, the report of that effort has neither been published nor implemented. AON was adequately represented on that Task Force.

In order, therefore, to save the industry from impending collapse and, borne out of sheer concern for the fate of thousands of Nigerian workers whose lives may be adversely affected by such a situation, we want to state our position on the following issues threatening the well-being of our industry:

Nigerian Domestic Airline Travel is the only mode of transportation that is subjected to the Value Added Tax (VAT). This imposition creates a suppression of domestic airline travel demand; therefore resulting in airlines not being able to optimally utilize their aircraft assets and more importantly creating a market distortion. The AON’s position is that the VAT on airline ticket sales for domestic carriers must be removed completely forthwith as road transportation, rail, marine and international air travel carriers are not subjected to VAT.

Moreover, a situation whereby some airlines are paying VAT while some other privileged airlines are not paying VAT and the VAT which we pay is being used to subsidize our competitors against those that are making payment is unfair.

The government has provided for Zero Customs Duty on Commercial Aircraft, Spares and Engines. Unfortunately, in 2018 the industry is yet to fully benefit from this provision.

This has resulted in airlines having some of their aircraft fleet grounded for days in some cases, thereby resulting in cancelled flights which in event results in chaos at our airports to the displeasure of our esteemed customers. This situation is unacceptable and should be reversed forthwith.

The Federal government should immediately institute the necessary mechanisms to ensure that the Customs Duty Waiver to Commercial airline operators as proposed and agreed should be fully effected.

The AON has always contended that the imposition of a percentage tax model creates a distortion in the industry. We have recommended and continue to recommend that the unit tax model preferred and practised by over 90% of countries globally and as recommended by IATA be adopted immediately.

It is worthy of note that all the industry agencies including the NCAA Regulator are established as Not-For-Profit organizations, essentially designed for Cost Recovery.

Unfortunately, over the years successive governments have encouraged the sourcing and increase in internally generated revenues (IGR) by these Agencies thereby completely negating the primary purpose for which they have been established.

This in turn, has resulted in serious wastage of scarce fiscal resources within some of these Agencies to the detriment of the travelling population.

On this basis, the AON strongly recommends that the Federal Government put in place the necessary mechanisms to reverse the percentile tax model and adopt the global best practice of the Unit tax model, while taking due cognizance of inflation. 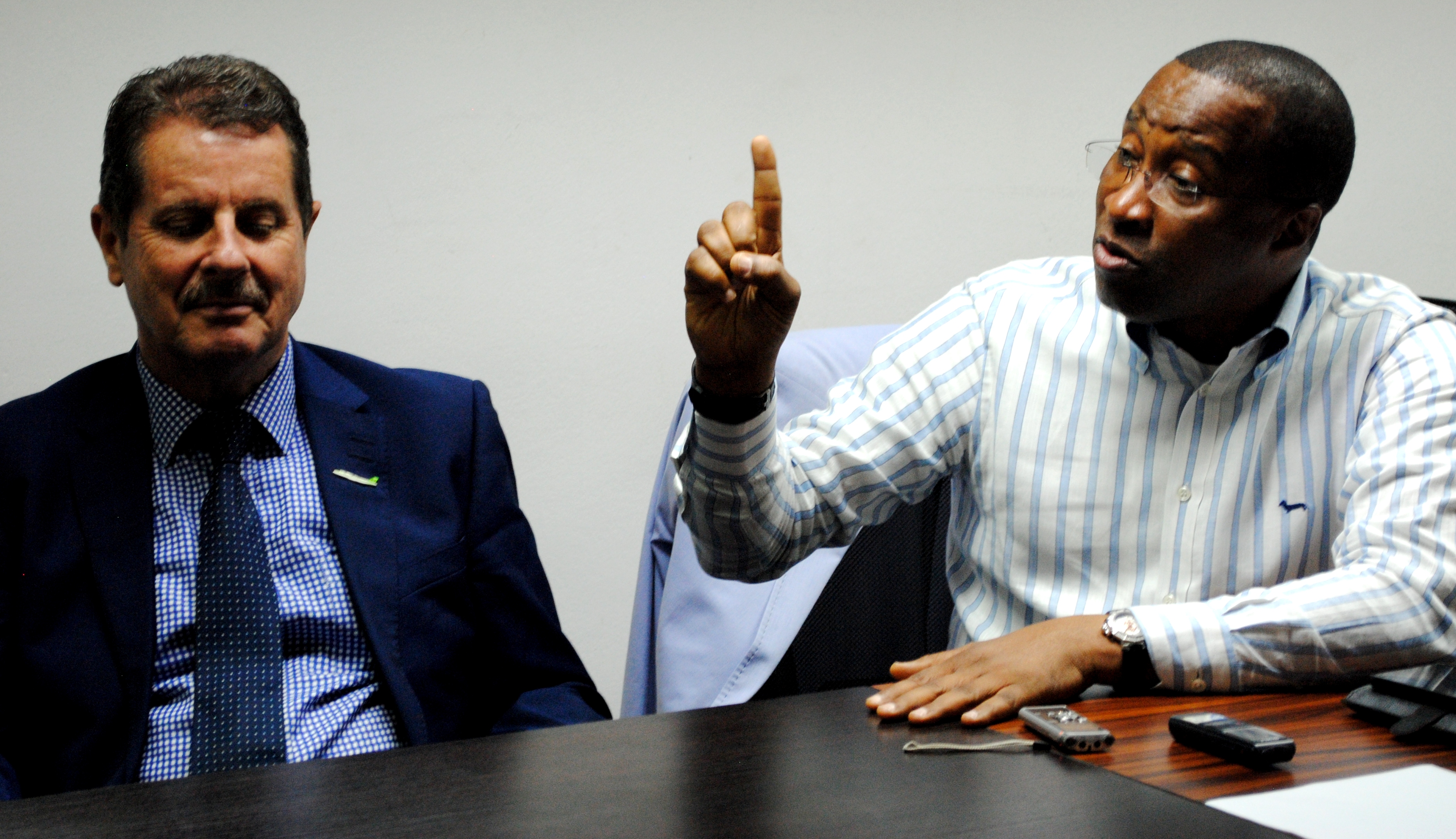 From left Managing Director, Pornier Aiation, Member,
Airline Operators of Nigeria (AON), Mr. Mark Snoxell and Managing Director,
Topbrasi Aviation, Member,AON, Capt. Roland Iyayi, during the AON Media
briefing on the State of the Aviation Industry and to Announce that AON
will Stop of Remittance of VAT to the Government on 14 June 2018 in Lagos

The AON is at a loss as to the relevance and need of a National Carrier at this point in time in the history of the nation. Whilst we are not averse to the government providing a conducive operating business environment and a level playing field for the establishment of a private sector driven flag carrier, the idea of using Tax Payers money to float a “National Carrier” in 2018 is not only counterproductive, but inimical to the overall interests of the present corps of private entrepreneurs.

In the overall scheme of things, “National Carrier” can only result in a huge distortion to the current market and will be a huge drainpipe to government’s treasury.

In this regard therefore, we urge the Federal Government to provide clarity on the Agenda whether it’s for job creation or for profit as well as steps being taken in the establishment of this “National Carrier”, especially when viewed against the background that the Honourable Minister of State Aviation has indicated that this airline will commence operations on December 24, 2018. Moreover, this model is no longer practicable worldwide as in the 70s 80% of the airlines in Europe were government owned airlines. Today 98% of the airlines have been privatized.

The approval by the Ministry of Transportation allowing international carriers to berth at several domestic airports designated for international flights decimates the domestic air travel market and depletes the nation’s foreign reserves and jobs.

AON’s position is that any foreign carrier should be restricted to only two points of entry into the country and explore interline options with domestic airline operators should it become necessary for expansion in order to protect capital flight and jobs of our ailing Nigerian youths.

In view of the above, the AON is calling on the Federal Government to review its policies on these matters and address our concerns as enunciated in the position paper presented to the Presidential Task Force on Aviation by the AON.

Furthermore, arising from its deliberations of airline CEOs, the AON has therefore resolved that effective June 14, 2018 its members shall cease to make VAT remittances as this is unfair as some airlines are paying while some other airlines are not paying domestic VAT charges.

Also, Nigerian domestic airline travel is the only mode of transportation paying VAT in the country today as road, rail, marine and international airlines do not pay.