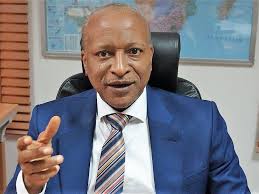 Sequel to the threat by aviation unions to down tools at Arik Air on September 14, the airline has asked the Minister of Labour and Employment, Chris Ngige, to intervene in the matter, saying strike action is not the solution to matters that can be settled through discussions.

Two unions, the National Union of Air Transport Employees (NUATE) and Air Transport Senior Staff Services Association of Nigeria (ATSSSAN) had in a letter to all Arik Air workers on Friday, asked them to begin strike on Monday, September 14, 2020, over some issues bothering on Condition of Service.

Meanwhile, a letter sighted by Thetravelport.com.ng, titled: Re-unions in Arik Air threaten to down tools September 14″, and written on behalf of the Management of Arik Air Ltd (In Receivership), drew the attention of the  Minister to ‘a new threat by the National Union of Air Transport Employees (NUATE) and Air Transport Senior Staff Services Association of Nigeria (ATSSSAN) to call Arik Air workers out on a strike on Monday, September 14, 2020’.

In the letter dated September 11, 2020, signed by Captain Roy Ilegbodu, Chief Executive Office of the airline and copied the Minister of Aviation, Hadi Sirika and Director general of Nigerian Civil Aviation Authority (NCAA), the airline said it ‘strongly believes that the threat of strike action without an exhaustive use of the various channels of engagement, discussion, consensus and understanding is faulty and unlikely to yield the best outcomes for staff, the company and its faithful passengers.

It added that the issue at stake only affects 20 out of over 1,600 staff, adding however that the Minister of Labour and employment should appeal to the understanding of the workers ‘ unions as this is the only way both parties can protect ‘a loss making entity’ from further issues.

“It is in fact an abuse of the position of union leadership as the issues in dispute cannot pass the test of fairness and only affect, in the short term, less than 20 staff out of a work force of over 1600. Prior to Arik Air Ltd going into Receivership, the employment letters basically detailed the approved emoluments of staff. Since the commencement of the receivership, this has been expanded by the introduction of policies to create best practice work environments to deliver top notch services. In addition, management has been in discussion with various staff groups and unions to have these policies codified into Staff Conditions of Service and have a share of mind on most issues. The only outstanding area of diference is the request by the unions for a terminal benefit scheme over and above the requirements of the Pension Act. They request for an independent retirement benefit scheme that will be wholly funded by the airline where retiring, resigning and terminated staff will receive a lump sum payment upon exit that will in some cases double the joint contribution of management and staff under the Pension Act of 2004 as amended. 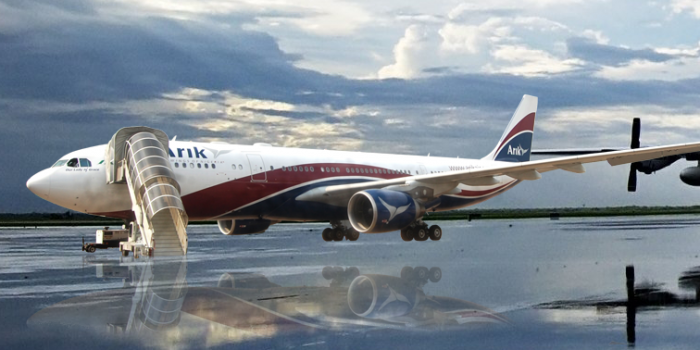 “While it is the right of staff to share in the prosperity of a company, the request for an additional retirement scheme from a loss making company, in receivership and whose operations are supported by creditors over and above legal requirements is simply onerous. Given the cost driven challenges in the aviation sector that have seen majority of airlines fold up in the past years, the request by the unions will set an unsustainable standard for other airlines that are struggling to survive in these difficult times. Nothwitstanding, management restates its committment to appropriate staff welfare and will do its best to keep workers motivated within the limit of available resources” , the letter reads in part.

The airline, while acknowledging the support of its financial creditors that have stopped demanding for repayment, said it is seeking for such understanding and support from Arik Air staff in order to soar together.

“We can report with much gratitude that financial creditors have all suspended demands for repayment to ensure the stability of the airline. We are also enjoying the support of fuel suppliers, aircraft parts suppliers and various Maintenance, Repair and Overhaul organizations (MRO) while carefully managing the COVID-19 challenge. This is the kind of understanding and support we urge all our staff to imbibe so that we can ride the times and soar. Honorable Minster Sir, we thank the umbrella body for Pilots and Engineers, National Association of Aircraft Pilots and Engineers (NAAPE) and the vast majority of staff for their understanding and cooperation as we navigate the post COVID challenges.

“While we appeal that you intervene in seeking for the understanding and cooperation of the workers’ unions, we remain committed to protecting the airline and assure our stakeholders of a safe and conducive working environment. We shall also protect the interest of the flying public for a safe, friendly and on time travelling experience” , it added.