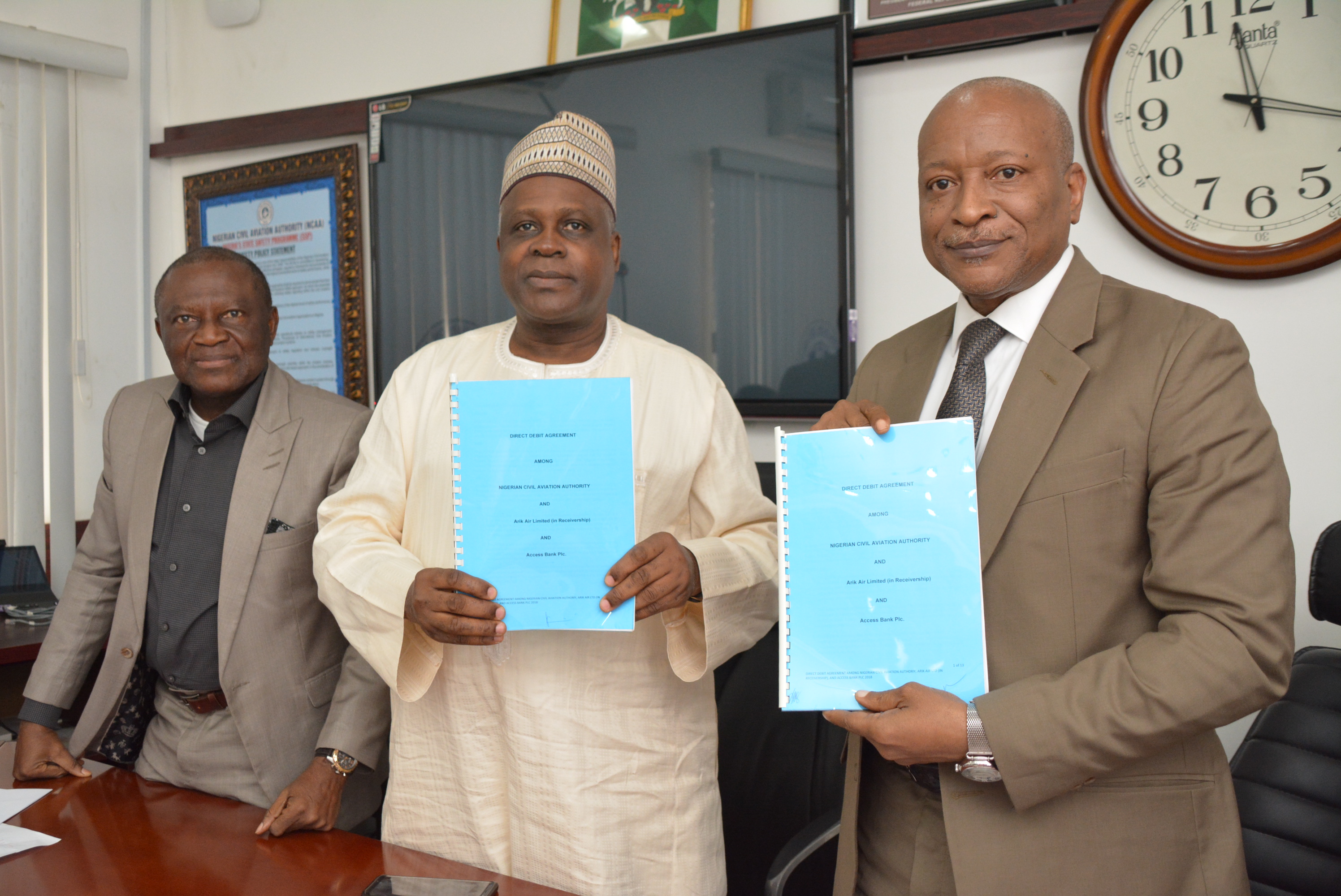 The revenue collection of the Nigeria Civil Aviation Authority (NCAA)  has received  a boost as one of the major Nigerian carriers, Arik Air joins the automation platform of the agency.

The platform is meant to deduct at source the 5% Ticket and Cargo sales charges accruing to the NCAA.

At the presentation of the signed automation Agreement at the NCAA headquarters, the Director General, NCAA, Captain Muktar Usman said the deduction was in line with the provision of the Nigeria Civil Aviation Regulations NCARs.

Captain Muktar while congratulating Arik Air for being fully complaint with the regulations said the automation system ensures transparency and urged other airlines yet to do so to urgently reconsider their decision.

He observed that everyone expects efficiency from the regulatory Authority and thus it was necessary to do what was expected of them to help the authority succeed.

Captain Usman explained that the 5% ticket and cargo sales charges were shared between 5 agencies namely, the NCAA, the Nigeria Airspace Management Agency, NAMA, the Nigeria College of Aviation Technology, Zaria NCAT, the Nigeria Meteorological Agency, NIMET and the Accident Investigation Bureau, AIB, adding the NCAA does not take money from government but generates its revenue internally from these charges.

He emphasized that the step taken by Arik to join other airlines who had joined the platform was a sign of a continuous working relationship, stressing that there must be synergy between the operators and the regulatory agency.

” Coming on the platform means transparency, more efficiency, less time spent on reconciliation. we want to use this opportunity to encourage others that are not fully in complaint to do, we do not like to force people to come and do so. The 5% charges are meant to take care of 5 agencies, NCAA, NAMA, AIB, NCAT and NIMET. Of the 5 agencies, the Civil aviation Authority demands on the 5% as its internally generated revenue and does not take money from the federal government”.

“We depend on this to run this organization. I want to congratulate Arik for this bold step”, he added.

Responding, Arik Air Managing Director, Captain Roy IIegbodu said Arik Air was committed to associating with the future and believed that this was a step in the right direction.

“One of the thing I would like to say is that the team that worked with us was very supportive, they work through last year and this year, it is not an easy task, automation itself is complex. We will continue to do our utmost to support the growth of aviation in Nigeria”.

Director, Air Transport Regulation NCAA, retired group captain Edem Oyo-Ita in closing the brief ceremony said, Arik had proven that they are sincere in what they were doing and urged them to also look at the reduction in airfares with the recent removal of 5% VAT on shared transportation by the Federal Government.