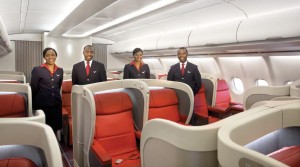 Arik Air flight on Lagos-Libreville via Port-Harcourt, is expected to increase trade activities between the two countries as they ate both oil producing nations with heavy traffic too.

During the maiden flight at the Murtala Muhammed International Airport, Lagos,  Gabonese  Ambassador to Nigeria, Mr. Corentine Hervo-Akendengue, hailed the airline’s decision to operate to the Central  African nation.

This is coming as so many oil workers, who have over the years longed for direct connection between Nigeria and Gabon, heave a sigh of relief from spending two days to connect the cities as against One and a half hour

“A lot of Nigerians from the South East travel to Libreville on regular basis and we also have corporations that are dominant in Nigeria which transact business in Gabon because the two countries are oil producing, so there are a lot of traffic between the two points. It is in the interest of the two countries that there should be direct flight services,” Sundaram said.

He remarked that Arik Air, being an indigenous carrier , is eager to provide services for Nigerians and people in the African continent, by solving the problem of connectivity wherever it arises in the West Coast.

He noted that because many Nigerians live both in West and Central Africa,  the airline would do everything possible to remain the only dependable carrier to connect to Nigeria from any part of Africa and beyond.

The Chief Marketing Officer also explained how Arik Air intends to operate the new route, where it has deployed the newest aircraft in its fleet.

“We start every route like we have done for West Africa. We are the largest airline in West and Central Africa. We started all routes with three frequencies a week, slowly expanding it, based on demand, we move to five frequencies, then daily frequencies. Again, based on demand, some markets are serviced two or three times a day like Lagos-Accra, Ghana. We are also the biggest airline in Ghana. So these are plans we have laid over the past 10 years and we continue to do so with route expansion, aircraft acquisition, to expand into more and more destinations globally, including the African continent.

He said Arik Air has planned the flight in such a way that there is a late evening departure from Lagos and this enables all domestic flights to come into Lagos, Abuja and Port Harcourt to make the necessary connections.

“For example, because of our evening departure from Lagos, passengers from other domestic flights can come to Lagos to meet this flight. If you are based in Abuja, you can also go directly to Port Harcourt because this flight goes from Lagos enroute Port Harcourt to Libreville. So you can go from Abuja to Port Harcourt and connect the flight there. So you have choices both ways. You also arrive from Gabon to Nigeria in the morning. We are able to make connection in the West Coast and in the domestic flights so anybody can come to Nigeria from Gabon and connect your flight to other destinations,” the Chief Marketing Officer also said.

Hervo-Akendengue, who was visibly elated during the maiden flight to Libreville, praised Arik for its great vision to connect West African nations.

Also in a brief speech, the Nigerian Ambassador to Gabon, His Excellency, Mr. Bassey Archibong, said the decision to operate to Gabon from Nigeria by Arik is what the thousands of Nigerians that live in Gabon are looking for, adding that it would reinforce bilateral relation and boost commerce between the two countries.