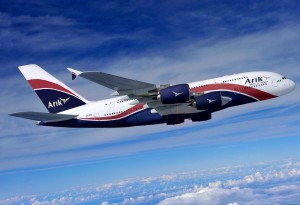 Arik Air management announced on Thursday night that its London-Lagos flight scheduled for Thursday will operate on Friday ((Today) due to a technical fault on the aircraft.

Adebanji Ola, the airline’s spokesman in a statement said the aircraft was confirmed Aircraft On Ground (AOG) on landing in London on Thursday night.

“Our A330-200 aircraft operating Lagos-London Heathrow flight on Thursday night had a technical fault on landing in London and the aircraft has been confirmed AOG.

“As a result of this, Thursday’s London-Lagos flight has been rescheduled to operate on Friday. However, this incident will not affect Friday’s Lagos-London flight which will operate as scheduled at 12:45pm Friday.

“Arik Air wishes to assure its passengers that their safety is of utmost importance in its operations”, he said.