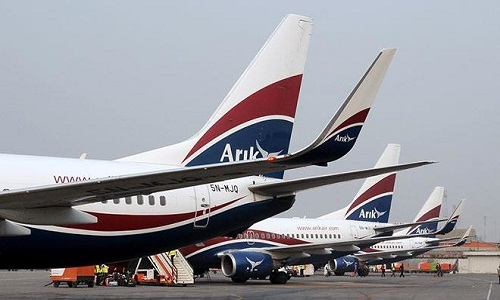 Arik Air on Monday, assured its passengers on the Lagos-London route that all the backlog of their baggage would arrive in Lagos on Tuesday and Wednesday, December 6 and 7, 2016 respectively.

The airline, through Ola Banji, its spokesman in a statement, while explaining the delay in the arrival of the baggage, said over the past three days, Arik Air has been using a smaller aircraft, a Boeing 737-800, to operate the Lagos-London Heathrow route due to maintenance on the wide-body A330-200 aircraft allocated on the route.

He added that one of the airline’s Airbus A330-200 aircraft had been hit by a handling company at John F Kennedy International Airport New York on Thursday, December 1, 2016 consequently triggering the B737-800 to be deployed on the Lagos-London route.

However, in order to avoid cancellation of the Lagos-London Heathrow flights, an alternative B737-800 aircraft had to be allocated on the route to minimize the inconvenience to booked passengers.

He explained that the airline was constrained in capacity from a wide-body A330-200 aircraft to a narrow-body B737-800 aircraft and thus had to leave some of the passengers’ baggage behind in London.

“Passengers were however duly informed of this capacity restriction at the check-in desk at London Heathrow Airport and were advised of the possibility that some of their baggage will have to be sent on subsequent flights as per space availability.

“Arik Air offers the most generous in-cabin baggage allowance on the route and due to capacity restrictions on the smaller B737-800 aircraft, the airline has had to drop some of the baggage in order to accommodate maximum number of passengers.

“To this end, an extra aircraft was also operated to London Heathrow on Sunday, December 4, 2016 to accommodate all passengers and some outstanding baggage. Arik Air regrets any inconvenience this development may have caused its esteemed guests. We appeal to our guests to show some understanding and not to resort to damaging of the airline’s properties and disruption of operations”, he said.