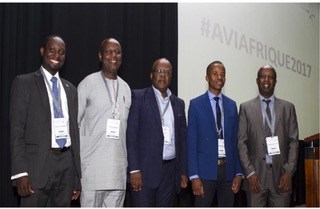 The recent AVI Afrique Africa Innovation Summit held at the CSIR International Convention Centre in Pretoria once again, featured as the leading aviation event in South Africa, attracting hundreds of delegates from all over the continent and beyond.

Under the theme “In Africa. For Africa. By Africa”, the summit facilitated a platform for the African aviation industry to engage around innovation and improvements in the industry and acted as an exploratory infrastructure development tool for the participation of small and micro enterprises (SMMEs) in the aviation market across the continent.

“Collaboration throughout Africa, to ensure a sustainable market, is the key focus of this summit and we have enlisted some of the brightest minds in the industry to be a part of this event,” said Thabani Mthiyane, CEO of the Air Traffic and Navigation Services (ATNS), hosts of the summit.

He has been in the international civil aviation community for over 30 years and comes from a background of aircraft maintenance engineering and flight safety standards. Kashambo has worked with the Civil Aviation Authority in Uganda as an Airworthiness surveyor/Inspector and Accident Investigator for 21 years. He has also served as an aviation safety officer for the UN MONUSCO, performing oversight and accident/incident investigation for the biggest UN fleet, at the time.

His experience in the sector, coupled with various positions held across the globe, enabled Kashambo to give a worldly view on the sector and how to ensure valuable, consistent development.

“ICAO’s ‘No Country Left Behind’ campaign: Effective implementation of Safety, Security, Infrastructure Development, Technology Innovation and Environmental Sustainability was discussed at length. The panellist looked at what can be done to harmonise the effectiveness of this objective by the States and/or Air Navigation Service Providers.

Technology Innovation Agency (TIA) and the Air Traffic and Navigation Services (ATNS) sponsored the AVI Awards for 2017. At the evening awards function, Mark Van Wyk walked away with a top Innovation Award, renamed the OR Tambo Cumulus Award, for his prototype UAV (unmanned aerial vehicle) that will become the first hydrogen powered aircraft, fully developed in South Africa.

Van Wyk, founder of the company FlyH2 Aerospace and his partner, Onno Huyser, are developing a large, fixed-wing unmanned aircraft for survey and environmental research purposes. The aircraft will be powered by novel miniaturised hydrogen fuel cells designed,   prototyped and trialled by TIA seed fund recipients at the University of Cape Town, HySA Catalysis.

On day two, delegates listened to Soweto-born Mr Nthatho Moagi, a young emerging innovator who designed a Low Cost Educational Robotics Toy (LCERT) kit developed to provide learners and educators with affordable access to educational resources in their Science, Technology, Education and Mathematics (STEM) classrooms. His company, CRSP dsgn, was established to commercialise his invention. Named as one of the Mail & Guardian’s Top 200 Young South Africans of 2017, Moagi is highly focused on empowering SMMEs in the innovation sector.

As the summit ended, the world’s smallest, most capable, personal reconnaissance system, the Black Hornet, was launched by Desert Wolf Consulting.

The drone, also known as an Unmanned Aerial Vehicle (UAV), is an American military equipment aircraft that can fly without a pilot, relying solely on its autonomy which allows for it to be controlled by remote control or by a human operator. The Black Hornet’s small size and electric motors makes it virtually inaudible and invisible once airborne.

The system will be only be available to military, police and government clients in South Africa, with local support and training. South Africa’s first female military drone instructor, trained by the manufacturer in Norway, is already training another Black Hornet pilot in South Africa.

At 18 grams, the Black Hornet is inherently safe, organic and covert. Despite its small size, the Black Hornet provides live motion video and snapshots back to the operator. The system can be delivered with both day/ lowlight and night vision cameras, covering a 24/7 operational requirement.

“There is no doubt that innovation within the aviation sector is of the utmost importance, not only to ensure competitiveness across the sector, but also to enhance and advance the industry with a focus on safety and security. As the transport of people and cargo across countries, continents and time zones becomes increasingly complex, airlines, airport owners, operators and investors are challenged to adapt and provide efficient aviation solutions,” continues Mthiyane.

“This event was again a resounding success and it was important that we gathered some of the greatest minds to engage on how we could work together to elevate the African aviation market and ensure the participation of African SMMEs on this journey,” concludes