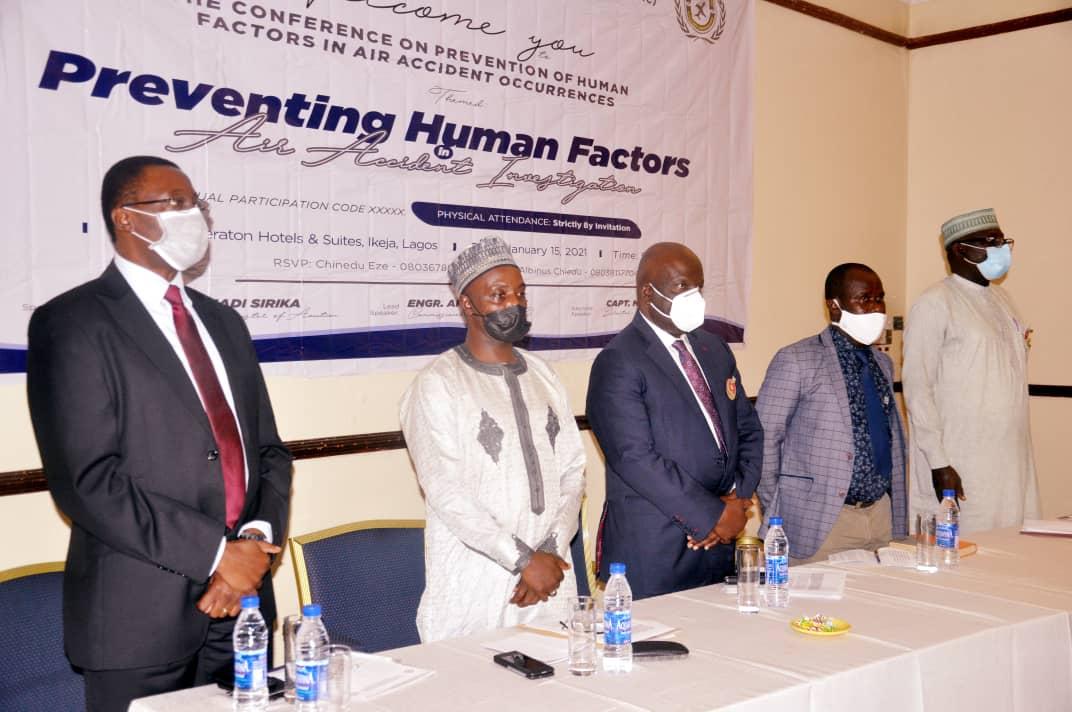 Poor communication between cockpit and the control tower, loss of situational awareness,  lack of training, poor facilities, fatigue, flight crew judgment and maintenance personnel are some of the human factor errors that need to be addressed to improve on the accident and incident rate in air travel according to safety experts.

These were deliberated at the just concluded LAAC/AIB Conference: Preventing Human Factors in Air Accident Investigations held at the weekend in Sheraton Hotels and suites where industry stalwarts considered ways of tackling the human factor situation.

Speaking on poor communication between cockpit and control tower, President of National Air Traffic Controllers Association (NATCA), Engineer Abayomi Agoro decried that poor communication and training on new facilities are needed to improve the situation in the air space.

He explained that airlines are not compliant with some of the new technologies introduced and even staffs are not gone through their training.

Agoro said, “The issue of communication has been something we have been calling on government and NAMA as service provider to do more on it. The poor communication is not only from the ground equipment at times also it is from the air stations but most of the time these are some things that can degenerate to incidents or accidents.

“Even now that we have data exchange which has to do with the CPDLC not all the airlines are compliant with that and not all the controllers have gone through the training so definitely, it’s one of the areas we have to look critically into to prevent human factors we are talking about.

Buttressing his point on paucity of communication Representative of the Airline Operators of Nigeria (AON), Captain Akin George said communication system in Nigeria is best described as weak.

He said,” The communication system in Nigeria is quite weak; this has been a recurring problem for the last 10-15 years. Solutions have been put in, we take one step forward and within a month or two we are back to the norm.

“We have been talking on human factors today and we know one of the critical elements is communication, if you cannot communicate with your controller; then who is controlling who? As of today the communication between aircraft and the services coming out of Kano to Lagos is extremely weak. If you happen to be operating from the eastern side of the country, coming out of Calabar or Uyo, Port get Harcourt and you’re heading towards Kano, it’s extremely weak, in most cases you have to get another aircraft to rely your information.

“Now whilst all this is going on the aircraft does not stay in one place and so you have a dynamic situation which for me, remains high risk and that is one of the areas we need to tackle as soon as possible in order to reduce the risk. “

Commissioner AIB, Engr Akin Olateru in his opening remark, stated that aircraft accidents are dominated by the failure of human factor failure explaining that it is vital to understand the complexity of human factors within a system with the intent of reducing it to the barest minimal.

He said,” Despite a positive development in the trend of accidents recorded since the beginning of the 21st century, the number of air accidents is still unsatisfactory. Consequently, it is of paramount importance to do everything that would contribute to substantial reduction of the human factor failure in air transportation.

“A system of models appears to be an important tool for overall understanding of the complexity of human factors, serving as starting-points to an analytical and classification research of the human factor. At the same time, these models enable qualified investigation and assessment of the causes of air accidents and incidents, thereby preventing them from repeated occurrence.”