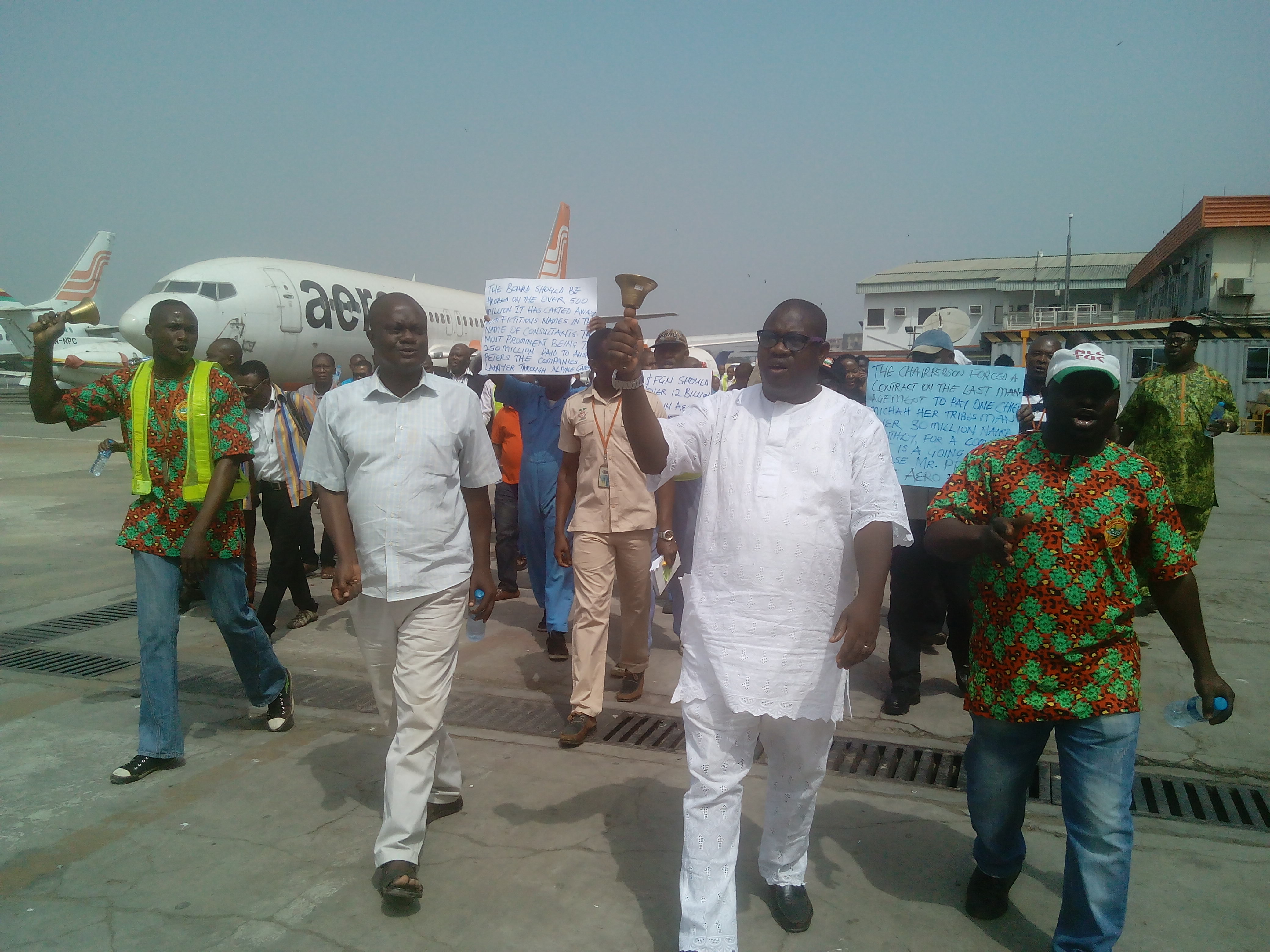 Aviation unions and workers of Aero on Monday, declared the Chairperson of the Board of the airline and other members brought in by Asset Management Company of Nigeria(AMCON ) persona non grata for allegedly mismanaging the airline and refusing to review the over eight years old organogram that has outlived its usefulness.
The workers led by the President of the Air transport Services Senior Staff Association of Nigeria(ATSSSAN), Benjamin Okewu and the General Secretary, National Union of Air Transport Employees (NUATE), Olayinka Abioye and other union members, staged a peaceful protest about the manner the airline is being managed, thereby declaring the board members and management persona non grata.
The over 800 workers marched in and around the premises of the airline at the Murtala Muhammed Airport(MMA), Lagos, singing solidarity songs and calling for the immediate implementation of a new structure, better management failing which the board must resign.
Speaking to journalists the ATSSSAN President, Benjamin Okewu, stated that the work force of the oldest airlines is over 1,000 ,adding that if the workers allow the mismanagement currently going on in the airline to continue, the over 1,000 workers in the airline would be affected .
He pointed out that if that happens, the multiplier effect would be great because of their dependents, adding that as it is today, the unions are not ready to cooperate with management of Aero on this matter.
Okewu said that efforts to partner aviation entities in the past to resolve workers’ issues have failed, adding that from records what the companies understand is industrial action.
He said that the new structure of Aero, which has been prepared should be signed and implemented failing which the management should resign, adding that some of the funny things that cannot happen in the public sector are happening at Aero.
Okewu posited that board members brought into the airline were not helping matters as they were allegedly busy collecting money and not bothered about the sustenance and survival of the airline.
The ATSSSAN President alleged that the management was conniving with the board of the airline to mismanage the airline.
“AMCON is not concerned about the survival of Aero, if AMCON is concerned about the survival of Aero, it should give us professionals that are good and have pedigree in airline management”, he said.
On his part, Abioye, stated that the management of the airline had been taking the unions for granted and that while the management and the board were allegedly benefiting from the airline, the workers who are critical stakeholders in Aero were not taken care of.
Aero workers, he stated had suffered too much, adding that instead of workers lives to improve, it had continue to dwindle.
He said now is the time for the workers to rise to the current challenge, warning that if they fail to act, the airline may collapse.
He said that before Aero is run aground the workers must act to tell the management that enough is enough, adding that the level of impunity at the top is high.
“It is time to tell the management that enough is enough”, he said.
He called on the management, board to implement the new structure or face the wrath of Aero Angry workers.
Also speaking ,the Chairman of ATSSSAN, Aero branch, Emakpo Ayo—Ife, stated that what the workers were asking for is a review of the structure that was put in place eight years ago, which according to him the airline’s management has power to carry out.
“What we have been asking for is that the company has an existing structure that has not been updated in the last eight years. Ordinarily, it is something that the management has the power to do but unfortunately for us, we have a board that came to hijack all the decision making rights of the management and they have been hiding under this to loot the company.
“They told us they don’t have money but we have been seeing some frivolous contracts made in the system. Before the last managing director was made to go, there was an issue of about N450million that was taken out of the system in the name of consultancy fee for the company lawyer.
“AMCON invested about N10billion in this company throughout the period that they have been here.
On the number of airplanes the embattled airline has at the moment, he said, “When they came in, we had 11 aircraft and now we are down to five aircraft and they came in 2011.
He alleged that AMCON paid a $9million to a company in Brazil, which according to him the airline has not retrieved but that nobody is talking about all that.
“All we are asking for is a prudent management and workers welfare. We want AMCON to dissolve the board.”
2015-12-14
Sade Williams