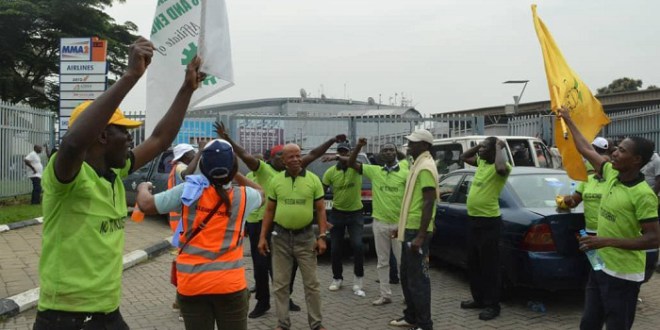 Aviation unions have called off the strike embarked upon at the Murtala Muhammed Airport Terminal Two (MMA2), to press for some demands including the recall of 27 staff sacked by the management of Bi-Courtney Aviation Services Limited (BASL) operators of MMA2.

It was gathered that BASL management has now agreed that its staff can exercise their right of association by indication their willingness to join any of the aviation unions.

It was also agreed that 27 members of the organisation which were laid off shall be recalled without  loss of pay or service and deployed to where their services are required within the Resort Group, the parent company of BASL.

“Thereafter, the company intends to declare them redundant and is willing to discuss their redundancy benefit with the unions in accordance with section 20 of Labour Act.

“We hope that the unions shall appreciate the olive leaf being offered by BASL and accept same with a view to ending this imbroglio”, a statement obtained by The Travelport and ssigned by Ola Azeez, Group head, Human Resources and Rodger Whittle for BASL, said.

It was learnt that  the Nigeria Police, Department of State Security (DSS), Nigeria Civil Aviation Authority ( NCAA), Nigeria Drug a Law Enforcement Agency (NDLEA), Nigeria Immigration Service ( NIS) were all at the round table where the agreement was reached.

Airlines operating at the MMA2, had cried out over their losses, as the grounding of the terminal by aviation labour unions, including the Air Transport Services Senior Staff Association of Nigeria (ATSSSAN), the National Union of Air Transport Employees (NUATE) and the National Association of Aircraft Pilots and Engineers (NAAPE) entered day two yesterday.
They threatened that they may be forced to retrench some of their workers, if the unions sustained the closure of the terminal.
Airlines operating from MMA2 to various destinations in the country include Dana, Aero, Arik, Med-View, Azman, Max Air and First Nation.
They had  said since the unions shut down the terminal building despite an order of the Federal High Court sitting in Lagos and presided over by Mr. Justice I. N. Buba, they had lost over N300million in revenue.
2018-10-11
Sade Williams