At a world press  conference on Tuesday, the unions said they were further angered by the fact that the minster of Aviation, Hadi Sirika, was single handedly pursuing the plan as other teams who were supposed to be part of the matter had been sidelined.

They argued that brandishing a Certificate of Compliance issued him by the ICRC which confirms that the Minister has complied with all needed requirements to proceed with the process of concession for the airports does not hold water, from their (unions’) stance because no due diligence has been carried out too.

“As stated earlier, the Honourable Minister of Aviation, Senator Hadi Sirika, brandished, this past Thursday (25th June, 2020) the Certificate of Compliance issued him by the ICRC which purportedly confirms that the Minister has complied with all needed requirements to proceed with the process of concession for the four international airports in Lagos, Abuja, Kano and Port Harcourt. Therefore the Minister will now proceed to seek the approval of Federal Executive Council (FEC) for his proposed Outline Business Case (OBC) for the project.

“But it is highly regrettable that both the Minister and the ICRC are engaging in a ruse, and are indeed taking Nigerians for a ride. We can say with authority that everything so far about the issue of concession for the four airports have been single handedly decided by the Honourable Minister himself, and the ICRC has not carried out any due diligence on to the concession exercise. If it did, the Commission would have discovered wide gulfs of deception in the exercise. 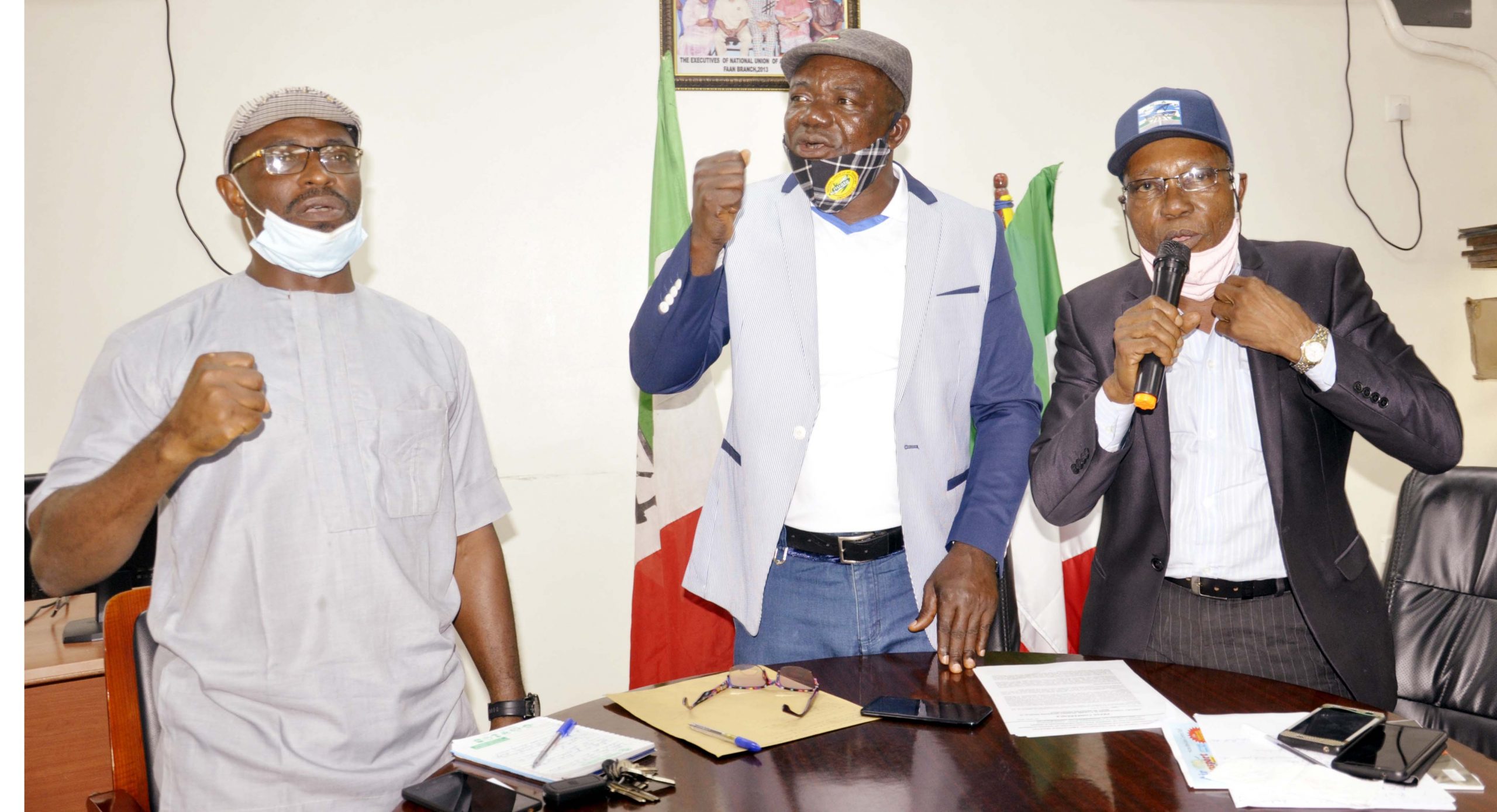 “For example, while the Project Delivery Team (PDT) – which includes the ICRC – was still discussing the issue of Transaction Adviser (TA), the Honourable Minister of Aviation was on air announcing the approval of FEC of a TA and his fees. Both the TA and the fees were apparently decided solely by the Minister. Up till date, the PDT has not been allowed to take a position on the matter, its effort in that direction being frustrated surreptiously.” , the unions said.

They explained further that ‘at the last meeting of the Project Delivery Team, in late 2019, it was decided that the airports concession issue be degraded to the bottom of the list of aviation priority projects while upgrading the National Carrier, Aviation Leasing Company, and the aircraft Maintenance and Repair Organisation for quick delivery. In addition, the ICRC was requested to provide the required components for the OBCs for the upgraded projects which the Commission promised to provide at the next meeting. That next meeting is yet to be called till date. But now, the same ICRC has been said to have issued a Certificate of Compliance (C of C) to the Honourable Minister of Aviation for the Outline Business Case for concession of four international airports. So we ask, who is fooling who?

“For the records, the Project Delivery Team comprises about five Federal Ministries, including Aviation and Finance, and other agencies including FAAN and the ICRC itself, as well as two representatives of our Unions.

“Unfortunately, the Honourable Minister of Aviation completely sidestepped the Team and has gone ahead with his own programs as determined by himself alone. Our Unions have decided that we shall have to review our membership of the PDT if this type of public deceit and shenanigan continue.

“For now, however, being a component part of the Team, we completely disown any false reports of the Team there might be, upon which the ICRC might have erroneously based the issuance of the said C of C. We avow hereby that the said Certificate is obtained on faulty grounds.

“Based on the above, we hereby alert President Muhammed Buhari, the Federal Executive Council (FEC), the National Assembly and the general public not to be deceived by the “celebrated” Certificate of Compliance from the ICRC and not to approve the privately assembled Outline Business Case. This outline, for reasons stated, cannot be detached from individual embedded interests and may be a self-favouring booby trap.

Apart from this ‘unwholesome circumstance’,  the unions said it is already in the public domain that our they  are vehemently opposed to the selective concession of Nigeria’s four major international airports based on the fact that  Privatisation, of which concession is a form, has turned Nigeria into a huge theatre of the absurd, adding that the Nigerian experience in privatisation leaves a very sour taste in the mouth, even for a person with no taste bud.

“Check it out: Ajaokuta Steel Complex, steel rolling mills, NITEL, PHCN, and so many more. All tell tales of squander and plunder, with nothing to recommend that method of business to any Nigerian government. In aviation, we have not been spared from concession foul odour. The story of the failed privatisation of the then National Career, the Nigeria Airways which took the Airline’s life is still reverberating since 2004. The concession of MMA2 to Bi-Courtney remains the biggest example of how not to concession an airport. All ongoing concessions of economic activities of FAAN have only resulted in losses in revenue to the Authority. With all these at the back of our minds, we ask, dear God, why any Nigerian Government official would choose to waste public funds in chasing shadows in the name of privatising airports when nothing whatsoever has changed about the Nigerian situation.”

They noted that ‘already, the circumstances surrounding the ICRC issuance of Certificate of Compliance to the Minister of Aviation has clearly demonstrated that personal interest cannot be extricated from Nigeria’s privatisation experience’.

“But considering the basis of creating these other airports which is the public interest of opening up the entire country, even nationwide development, and national unity, one would wonder the rationale behind the idea of sacrificing these undeniably noble goals on the altar of a superficial notion of private investment. Should the urge to have beautiful airports override our national needs for integration? What about the employees in these other airports who are being sustained by the revenue from the four airports? Do their lives and that of their dependants not matter to the government? Should the so called drive for private investment be allowed to drive up our unemployment ranks, especially at this critical time? What of the economies of the States that will collapse with the collapse of the airports? Should we bear all these maladies just because some individuals are smart enough to cook up a scheme that hoodwinks government into short-changing the people, with national interests supplanted by internal naivety and avarice?

The uboons noted that what situation of the telecoms Secor could be replicated in aviation  where individuals or companies who desire and who meet given criteria may obtain licenses to build and operate airports wherever they choose.

“As far as we know, the Transaction Adviser has yet as at date, not submitted the report of the scope of the Transaction to the Project Delivery Team. This raises the big question as to what is really being concessioned at those airports. The whole airport? Or, are we to believe that only Terminals will be concessioned? Or facilities within the terminals? No one knows, except the Honourable Minister of Aviation. And this draws attention to the opaque nature of the concession conjecture.

“In a hurry to achieve a desired end, the Minister has conveniently, but dangerously neglected the primacy of national security in the life of a nation. Based on our current experiences with security, can we afford at this critical time, or in the near future, to open up our national security to private persons, especially foreign elements, considering the place of international airports in the national security architecture?.

“Of serious concern is the fact that the airports concessioning exercise is being directly carried out by the Honourable Minister of Aviation, whereas he does not run any airport, nor does the FAAN Act grant him any powers to concession FAAN assets. The Honourable Minister has completely usurped the functions of the Management and the Governing Board of the Authority. As such he has unlawfully arrogated to himself the powers to enter into agreements in the place of FAAN. This is to the extent that there is now no difference between the Ministry of Aviation and the Federal Airports Authority of Nigeria (FAAN). This is a serious infraction; a travesty and an anomaly.” , they said.

They revealex that ‘the joint Senate and House of Representatives Committee on Aviation of the 8th National Assembly held a public hearing on the matter, and the Committee, based on the weight of several unanswerable questions, resolved to ask Senator Sirika to step down the question of airports concession but their opinion was ignored by the Minister’.

“As can be clearly seen from the foregoing, the planned concession of the only four revenue generating airports of FAAN is an ill wind of which the only beneficiary is the source of the wind. As such, our Unions come against the exercise and will resist it with our strongest stance. We are compelled to act so in recognition of our corporate citizenship and our sacred responsibility to the general public and fellow Nigerians to safeguard our common patrimony.” , they added.