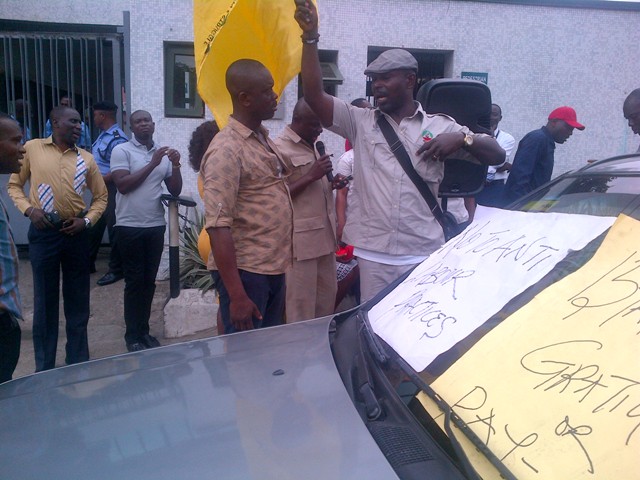 The union members with placards with various inscriptions such as ‘15 years no gratuity no gratuity’, shut the company as early as 4.30 am and prevented the workers from gaining entry.

Speaking to reporters, Ahmadu Ilitrus, president of ATSSSAN said the company had been unfair to Helicopter Landing officers (HLO), adding they were in the company at the instance of the officers.

He also explained that the workers had been in fruitless discussions with Landover management, adding that rather than agree with matters as presented before the Ministry of Labour, ‘they were foot dragging’.

Ilitrus said they had explored all known avenues of solving issues relating to workers’ welfare before resorting to protesting and shutting down the company.

“In the Landover Group, we have the Helicopters Landing Officers who are affiliated to the ATSSSAN and we are here this morning because of an avoidable situation that was mismanaged by the management. We have been in discussion with the management of Landover Company over review of conditions of service, which ought to have been ready since 2016, but the management dragged the process up till now.

“We have been talking, but there are few areas that we have not been able to agree, but they are fundamental areas covered by the laws. For instance, Landover says if they have a disciplinary committee to try our members, no union should be part of it. This is unheard of. The law requires that the union to which the officer belongs should be represented even in an observer capacity. We’ve been dragging this with Landover for a long time, but they don’t seem to agree.

“The last time we met here, we adjourned the meeting and we were shocked when we returned in the morning that the meeting could not go on because Landover had referred the matter to the Federal Ministry of Labour and we were at Labour Ministry, but when they discovered all the issues they were foot dragging on, these are non-issues, for instance, you don’t want the meaning of corruption defined in the condition of service. I think all these things are little things we could have done away with. However, when they agreed to sign a memorandum of understanding, the Landover management walked out of the meeting and said they were not going to sign”, he alleged.

Ilitrus, who explained that the management doesn’t want to shift grounds on the condition of service, noted that ‘for instance if you serve up to 15 years in Landover, you are not entitled to more than N340,000 no matter your position. This is unfortunate and unacceptable for us. The management should come out from their high horse and come down and discuss with us”, he said.

Another union member, who explained that the Lagos State commissioner of Police, Fatai Owoseni, had early in the morning, tried to mediate, alleged that a particular worker who was sacked was paid a little over N300,00 after working for 15 years, adding that the management des not take into consideration the risk in their jobs.

“For instance, one of our senior members was sacked in this company for no just reason by the management and he has served here for 15 years and three months, he was paid only N340,000 as all his entitlements and benefits. We disagree with this because this is not what in our Cumulative Bargaining Agreement (CBA). The document is very clear on what should be paid to workers that are disengaged. There should even be redundancy package for the person.

“The company took us to the ministry of labour, but when it discovered that it was losing grounds, it opted out. Also, the retirement period in this company is 45-50 years, which is even against the Labour law. Most of us are in Warri doing the offshore for the company, we are at the helideck doing some risky jobs”, he said.