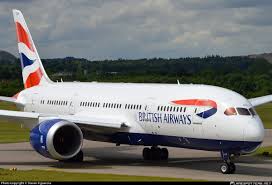 British Airways, international flag carrier in the United Kingdom, has launched fantastic fares to selected destinations in USA from Lagos.

British Airways customers and the general public will be able to take advantage of the slashed fares from 17th November up till 27th November, 2017 for flights from Lagos to USA.

Mr. Kola Olayinka, British Airways Regional Commercial Manager, West Africa, said, “British Airways is bringing USA closer this year to their esteemed customers with the slashed fares.” He further said that, “Bookings made during the set period will be eligible for travel between 17th of November, 2017 up till 31st March, 2018 for outbound travel.”

The promotion by British Airways opened to travellers from Lagos to USA will enable Nigerian holiday-makers who book during the selected selling period have access to the slashed prices. “British Airways is offering a unique experience to Nigerian holiday-makers who would want to get away either to catch-up with friends and family or generally need to be adventurous in the USA”, Mr Olayinka said.

The slashed fares will create an ease for travellers who need to manage their end of the year travel budgets to the USA through early bird bookings during the selected selling period. British Airways is dedicated to providing a first class experience to their valued customers who want to travel for the forthcoming holiday.