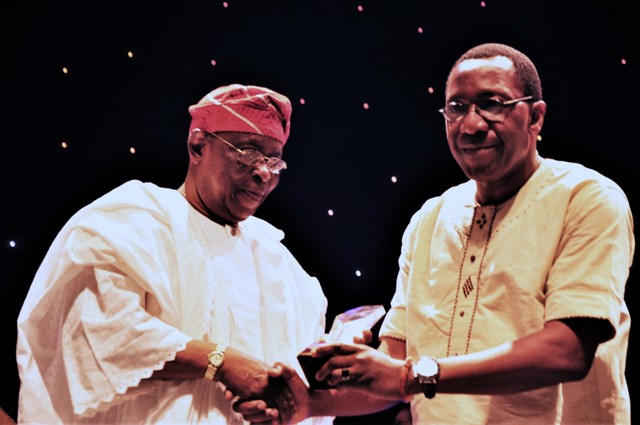 Chairman of The Resort Group, Dr. Wale Babalakin (SAN), has won the Most Outstanding Terminal Operator of the Year 2017 Award with his Bi-Courtney Aviation Services Limited (BASL), a member of the group and operator of the Murtala Muhammed Airport Terminal Two, popularly known as MMA2.

Organised by Independent Newspapers Limited, the award was presented to Babalakin, through his representative and Head, Corporate Communications, BASL, Chief Steve Omolale, by former Ogun State governor, Chief Olusegun Osoba, at a colourful ceremony attended by the crème la crème of the society at Eko Hotel and Suites, Victoria Island, Lagos.

Managing Director/Editor-in-Chief, Independent Newspapers Limited, Mr. Ade Ogidan, had told Babalakin in a letter he personally signed informing him of the award that “the Selection Committee considered your impressive list of achievements in Airport Infrastructure Development and Maintenance with a record of delivering the first major Public-Private Partnership (PPP) financed facility in the aviation industry. We note that through your company, Bi-Courtney Limited, you applied for the concessioning of the Lagos Domestic Airport, the Murtala Muhammed Airport 2, after the airport was razed by fire. Indeed, nobody gave the project a chance as it was considered too cumbersome for the capacity of a private company.

“However, within three years of the concessioning and in the face of serious hostility and inconsistency on the part of the government, Bi-Courtney Limited completed the new domestic airport, which is now famously known as MMA2. This airport terminal has been variously described as the Best in Nigeria today and certainly the first airport terminal to be built in Africa with private funds without any support of the government.

“The terminal, constructed under a Build, operate and Transfer (BOT) agreement with the government, is acclaimed to be the most modern, functional, and well-run domestic airport terminal in sub-Saharan Africa.”

Replying, Babalakin expressed gratitude to Independent Newspapers Limited for the recognition, saying “it is coming as a source of encouragement at a time we are facing the most serious challenges in our operations caused by no fault of ours.

“This notwithstanding, in as much as we know the enormous responsibilities that come with this kind of honour that has greatly challenged us to do more, we would continue to provide the best of airport terminal services for Nigerians and others who patronize MMA2, as a way of sustaining the seamless passenger facilitation and the relaxed ambience that have been our hallmarks since inception over 10 years ago”.