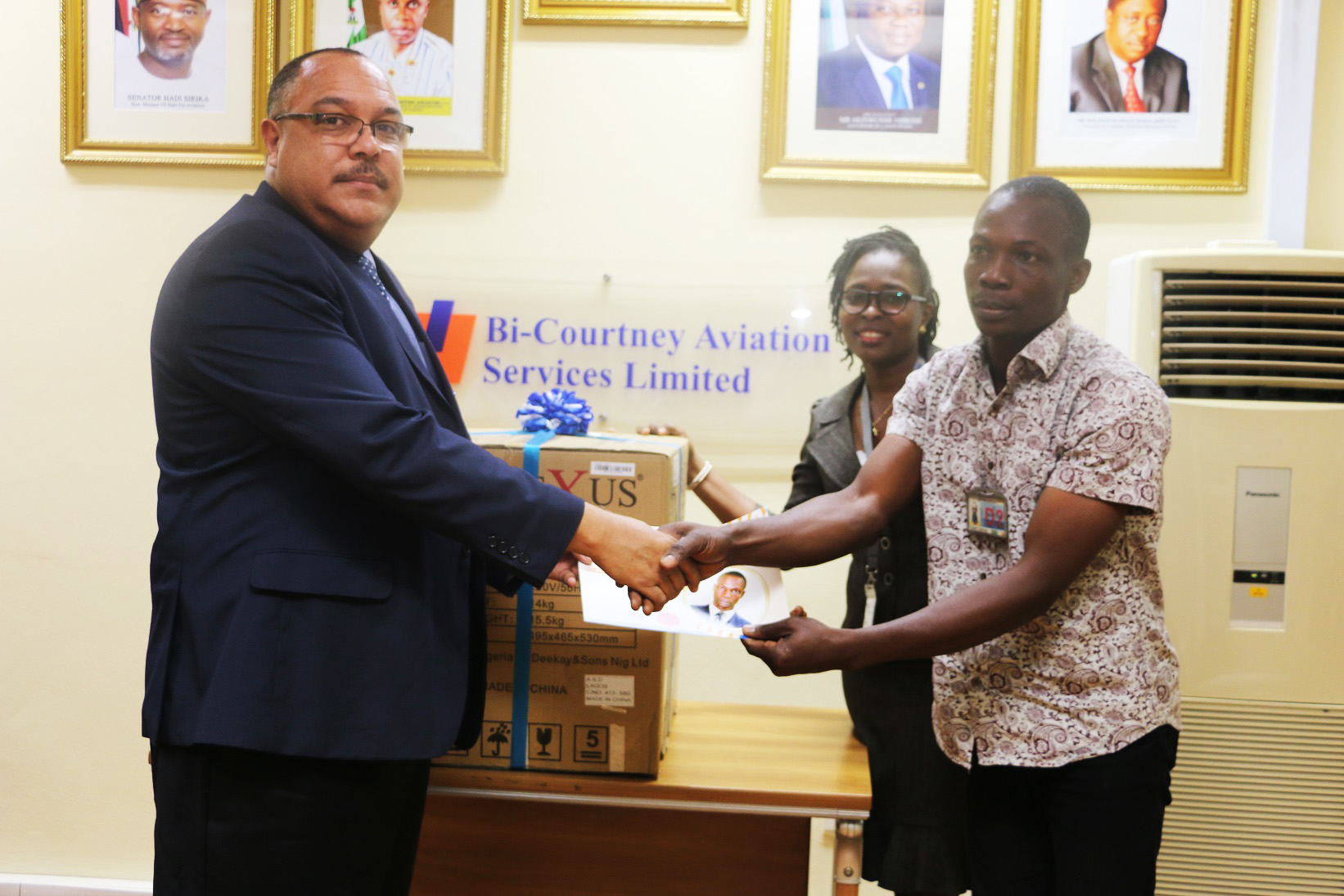 Chief Executive Officer, Bi-Courtney Aviation Services Limited (BASL), Captain Jari Williams (left) presenting a cheque, Certificate of Commendation and a gift to a cleaner with Spakleen Professional (cleaners of the Murtala Muhammed Airport Terminal 2), Mr. Abayomi Oluwole, who found a bag containing a huge sum of money and other personal items at MMA2 and returned them to the owner recently. With them is the Head, Human Resources, BASL, Mrs. IkeOluwapo ErinOluwa

By Sade Williams
Poised to promote the culture of honesty, dignity and hard work in the work place, the management of Bi-Courtney Aviation Services Limited (BASL), operator of the Murtala Muhammed Airport Terminal 2 (MMA2), has honoured an honest cleaner with Spakleen Professional, the concessionaire in charge of MMA2 upkeep.
The gesture, according to the Chief Executive Officer (CEO) of BASL, Captain Jari Olubunmi Williams, was designed to promote the culture of truthfulness and uprightness in the work place.
The cleaner, Mr. Oluwole Abayomi, while at his duty post on Saturday, July 30, this year, saw a passenger bag containing cash, two cheque books, one international passport, two iPhone 5 handsets, and a Toyota Car particulars, among other items, and handed the bag over to security officials at the terminal. The items were later transferred to the owner, who was full of praises for Oluwole’s honest conduct.
While eulogising the singular Oluwole’s, the CEO said, “what the young man has done, without being prompted, is a reflection of what Bi-Courtney Aviation Services Limited (BASL) instils in its staff and service providers that honesty, service delivery and good customers relation pay off.”
He noted that the vision of the terminal operator is to keep to best practices, doing things the right way, and provide top notch services from time to time to satisfy passengers’ needs and expectations and advised Oluwole to continue the good work, noting that honesty with hard work has a reward.
The Head, HR of BASL, Mrs. IkeOluwapo ErinOluwa said that the gesture was to promote the values that Oluwole’s action symbolised and to encourage others to emulate him.
While Oluwole was also promoted to the position of supervisor by his organisation, the management of BASL presented to him a Certificate of Commendation, a table fridge and a cash token.
2016-10-14
Sade Williams