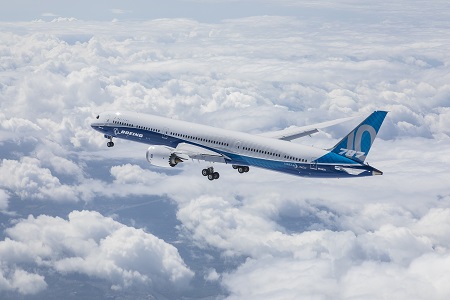 he Boeing 787-10 Dreamliner took to the skies for the first time today at Boeing South Carolina. This air-to-air photo shows the airplane during its flight. Source: Boeing.com

The Boeing 787-10 Dreamliner took to the skies for the first time on March 31, 2017, at Boeing South Carolina. The airplane, which is the newest and longest model of the 787 family, completed a successful flight totaling four hours and 58 minutes.

“The 787-10’s first flight moves us one step closer to giving our customers the most efficient airplane in its class,” said Boeing Commercial Airplanes President & CEO Kevin McAllister.

He said: “The airplane will give carriers added flexibility in growing their network routes and build on the overwhelming success of the 787 Dreamliner family.”

Piloted by Boeing Test & Evaluation Capts. Tim Berg and Mike Bryan, the airplane performed tests on flight controls, systems and handling qualities. The 787-10 will now undergo comprehensive flight testing before customer deliveries begin in the first half of 2018.

“From takeoff to landing, the airplane handled beautifully and just as expected. The 787-10 is a fantastic machine that I know our customers and their passengers will love”, said Berg, chief 787 pilot.

As an 18-foot (5.5-m) stretch of the 787-9, the 787-10 will deliver the 787 family’s preferred passenger experience and long range with 25 percent better fuel per seat and emissions than the airplanes it will replace and 10 percent better than today’s competition.

The 787 Dreamliner family is a key part of Boeing’s twin-aisle airplane strategy, which offers a modern, optimized and efficient airplane family in every market segment. Since entering service in 2011, the 787 family has flown more than 152 million people on over 560 unique routes around the world, saving an estimated 14 billion pounds of fuel.