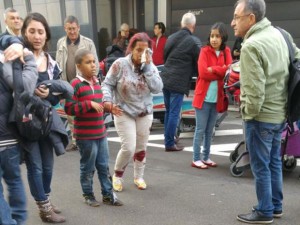 Following the twin bomb attacks that have left over 30 persons dead at Brussels airport in Belgium on Tuesday, Delta airline said it has diverted its flight originally headed for Brussels from New York to Amsterdam since the airport has been closed.

A statement released by the airline said only “Delta’s flight DL80, a Boeing 767-300ER with 151 passengers and 11 crew, from Atlanta to Brussels landed safely at the airport and all customers have deplaned”.

“This morning at approximately 8:15 am local time explosions were reported in the departures area of Brussels Airport in Belgium. The terminal was evacuated and is now closed with local emergency services onsite.

“Delta’s flight DL42, a Boeing 767-300ER with 144 passengers and 11 crew, from New York to Brussels was diverted to Amsterdam.  The airport remains closed for any flights to and from the Brussels Airport in Belgium”, it said.

The statement added that Delta will be actively working with customers with flights booked to, from or through Brussels to re-accommodate their travel plans.

“Delta has issued a travel waiver to assist impacted customers in rescheduling flights as necessary. Details of the waiver are available on delta.com:http://www.delta.com/content/www/en_US/traveling-with-us/advisories/brussels-airport.html”, the statement added.

According to reports, at least 31 people have been killed and many seriously injured in attacks at Brussels international airport and a city metro station.

Belgium has now raised its terrorism threat to its highest level.

The attacks come four days after Salah Abdeslam, the main fugitive in the Paris attacks, was seized in Brussels.

Prime Minister Charles Michel called the latest attacks “blind, violent and cowardly”, adding: “This is a day of tragedy, a black day… I would like to call on everyone to show calmness and solidarity”.