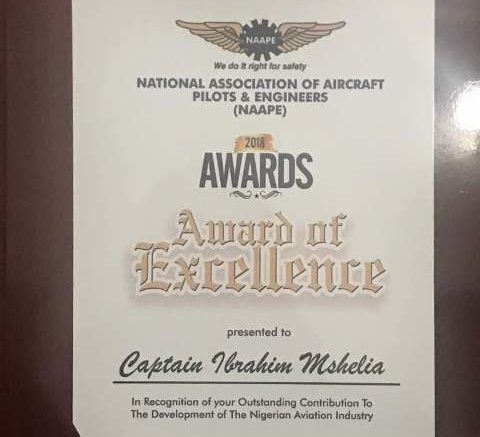 National Association of Aircraft Pilots and Engineers (NAAPE) has given an Award of Excellence to Chief Executive Officer of West Link Airlines, Captain Ibrahim Mshelia, in recognition of his outstanding contribution to the development  of aviation in Nigeria.

The award was given at the aircraft pilots and engineer body  Compendium of 50 outstanding pilots and aircraft engineers which held  at the Lagos Airport Hotel, August 4th 2018 with the theme: Promoting Professional Excellence (Pilots and Aircraft Engineers in Focus) which attracted top professionals on their field both serving and veterans.

Mshelia, currently in the gubernatorial race for the Borno State under the Labour Party, established the first ever privately owned and funded pilot training school in the Sub Saharan Africa in Ghana, Mish Aviation; where he has graduated tens of dozens of aircraft pilots.

He has also been on ground to play advisory role to government in anyway he can in a bid to grow and develop the industry.

Mshelia, who received the award expressed thanks to the executives of NAAPE and his professional colleagues and charged the body to always aspire to be models that other associations can emulate.

He also charged the body to continue to be pillars of growth in the society and the nation generally, urging them to always result to negotiations and dialogue as a way of conflict management and resolution, explaining that only then would they help the staggering industry work.

On his aspirations as governor of Borno State, Captain Mshelia said his ambition was borne out of the selfless reason to change the narrative in his home state of Borno, especially with the current humanitarian situation there.

He said, “Borno has a lot to give and it would take ideas, dexterity and a hands-on approach to ensure that the state becomes viable again through its agrarian resources and trade. If harnessed right we have a comparative advantage in farm produce and we can tap into that and utilise it to develop the state.”

On the country generally, Captain Ibrahim Mshelia said he wants to support the current president whom he has seen as the only leader in recent times who respects himself and the country’s ideology.

“A nation or person with no ideology is not going deliver social justice to its people. Look at the work done quietly by Buhari, it’s because he does not collect kickbacks or bribe that’s why contractors dare not to deliver. Look at the railway from Warri to Abuja, go and see roads abandoned in Abuja now all completed if not near completion etc. We cannot afford to continue to allow men with no ideology to run the affairs of a country with beautiful ideology like Nigeria. See how evidently the politicians have shown themselves by the series of defection and counter defections, it’s all about them and not the country. We are wiser now and God has used Buhari to show us that indeed development is easily achieved if you elect a leader and that will not take bribe.

“Let us therefore not continue to allow the mismanagement of our dear country by people who have had inferior patriotism, knowledge and ideas to take it forward.

“Everyone, you, I , NAAPE all of us need to pool together and save our country and if every good person sits on the sidelines, the country will not get saved and so that is one of the reasons I have thrown my hat in the race under Labour Party”, he said.