Certification: FAAN To Set Up Taskforce To Curb Miscreants’ activities at MMIA 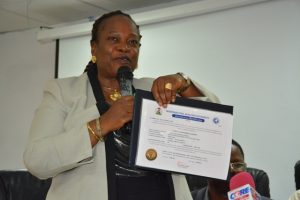 Following the recent certification of Murtala Mohammed Airport Ikeja (MMIA), the managers of the airport, Federal Airports Authority of Nigeria (FAAN), is to inaugurate a task force  to check the activities of miscreants within the airport environment.

The manager of the MMIA, Mrs. Victoria Shin-Aba who disclosed this in an interview in her office in Lagos said the setting up of the committee became necessary in order to improve the status of the airport.

According to Shin- Aba, sanity will be restored as soon as the multi-storey car park was commissioned adding that all vehicles will be moved in to the newly constructed car park to ensure that no body will violate the law.

She explained that, accredited car hire operators will also be moved to a conducive area where they will conduct their business a manner that befit the airport stressing that a situation whereby cab operators will be soliciting for passengers at the terminal will be eradicated.

Shin-Aba said all accredited airport car hire will be fitted with communication gadgets to be coordinated by their officials on picking and dropping off passengers at the airport.

On the activities of Bureau de change operators, the airport manager said they will also be moved to well organised area to ensure that their activities were regulated.

She said the management of the airport was determined to rid the airport of unwanted visitors and loitering.

According to Shin-Aba, Close Circuit Television Cameras will be mounted at strategic positions to adequately monitor the airport especially activities of unwanted visitors to the airport.

She called on various state governments across the country to see airports in their domains as their own and support them to grow instead of constructing new airports.

Shin-Aba decried the situation whereby state governments allow airports in their states to deteriorate without assisting the management but commended some state governments that have supported various airports.

The MMA airport manager expressed delight that with the elimination of search table processing time has been reduced gaining forty five minutes of processing time, making it possible for airline’s turn around to be faster.

According to her, the Executive Order has positively affected the operations of the airport adding that the airport can now boast of functional scanning machines.

Shin-Aba assured air passengers of better days ahead while remaining committed  to defend the certification of the airport.