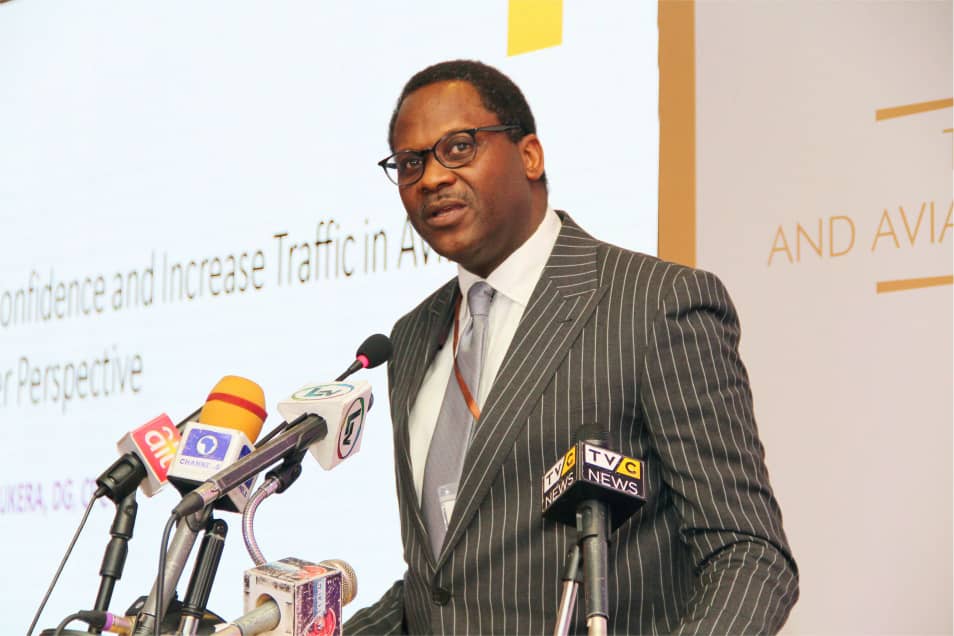 Mr. Babatunde Irukera, director general, Consumer Protection Council (CPC), has called on airlines to be responsive to consumer complaints, saying this is one way to boost confidence and perception about their services.

In his presentation tilted: Boosting Confidence and Increasing Traffic in Aviation: A passenger Perspective, at the 22nd Annual Seminar of the League of Airports and Aviation Correspondents (LAAC), with the theme: Financing Aviation Development Through Private Sector Partnership, he also itemizes quality services delivery, timeliness,  confidence and loyalty as insulators in a brand.

According to him, airport infrastructure complement airlines’ soft infrastructure, service and products, adding that good experience at airports and good complaint resolution mechanism by airlines would lead to loyalty.

“I will say two things, there has been some improvement but there is still a lot of challenges and we are confronting those challenges. As a matter of fact about a week ago, I sat in a meeting with NCAA and airlines operators and obviously the meeting was a collaborative meeting on how to address consumer issues in the industry. And what I seem to be hearing from a lot of the airlines, were there are challenges on how they do their work, infrastructural challenges, regulatory bottlenecks. But what was clear to me and what I conveyed to them is, regardless of all these challenges, I think that airlines have to measure their responsiveness and sensitivity indexes with respect to their consumers. One thing is that they don’t even have the appropriate mechanism for people to call in and have complaints resolves.

“So one thing that I thought happened at that meeting was that it was a frank conversation and while I got a lot to understand the deficits that constitute challenges to them, they also got to understand the soft infrastructure issues. Because ultimately the consumer issues are primarily soft infrastructure  issues. Airport and the airside or the terminal side they experience are vital to consumer experiences also, even if you have the best airports but there is poor responsiveness, then consumers will still be displeased. And airline industry is one place where you can easily satisfy consumers. Nobody wants to fly when it is unsafe to fly, so if there is a delay for a legitimate safety reasons, consumers will actually appreciate that. But what needs to happen is that first those delays have to be for legitimate reasons and your responsiveness and sensitivity to the issues must be such that you are upfront, you provide the information and then you provide options or find a way to mitigate whatever the inconveniences that consumers will be experiencing.

“In addition to that is the fact that there is a sector regulator and working with that sector regulator is going to be important for us to truly provide the kind of 360 degree protection that is required. I am also grateful that the sector regulator has agreed to work with us and has invited me to their meeting and we had an opportunity to jointly confront the airlines, so I think that is a good thing”, he said.

Speaking on the VAT waiver for airlines, he said it would translate to a better experience for consumers.

“When I look at it from the consumer stand point, it means it is going to translate to a better experience for consumers, fairer pricing for the consumer, I am all in support of it. So I don’t look at things from a tax stand point, that is more from a business stand point. But if that trickles all the way to benefit to consumers, both from a service stand point and a pricing stand point then I think it is an excellent idea.

“In the period I have been there I don’t think there has been any inconsistent comments but we have a working relationship where we collaborate, we cross refer complains and we address them from the two different legislative stand point. There are some mechanism for resolutions that exist in the Consumer Protection Council act that don’t exist in the civil aviation act and then there are some that exist in the civil aviation act that don’t exist in the consumer protection act. All we ultimately try to do is to make sure that there is regulatory clarity for the airlines to understand what exactly they are confronted with and we also make sure that whichever approach we take is what brings the best benefit for the consumers”, he added.