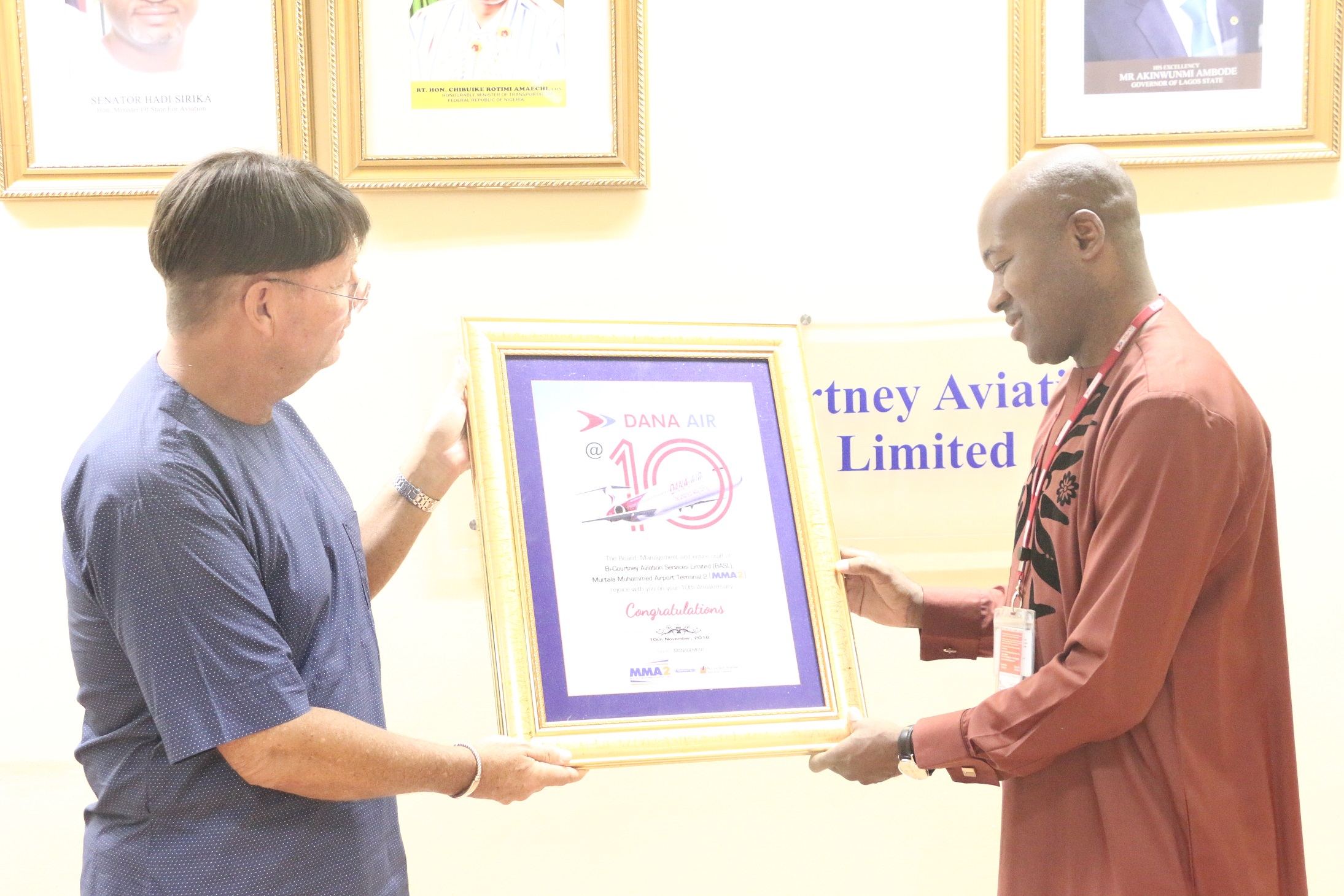 Ten years in the life of an organisation is no doubt, a huge milestone.

It all started with fanfare, glitz and glam. Ten years down the line, nevertheless, it is still a huge success story – this is for an airline that has risen through the storms of life to surmount all encumbrances to make a name for itself among its contemporaries.

This is typical in an environment where the pervading operating scenario is such that is characterised with ups and downs.

As an organisation that was prepared to make an indelible mark in the aviation industry, Dana Air since inauguration took the bull by the horns. It has since its inception progressively evolved with customer-centric innovations and services combined with a network of routes thereby bringing succour and option to the flying public.

Notwithstanding the unfavourable economic conditions in the country, the airline has grown tall and steadily providing top services and innovations to the delight of the flying public.This it has followed systematically and with a view to safeguarding the integrity of the aviation industry in the country.

With superior performance, service and creativity, Dana Air is uncompromising in its commitment to excellence and safety as it relates to aviation in the West Africa sub-region and beyond. As widely known, transportation has played and continues to play a vital role in the socio-cultural, political and economic development of Nigerian. This has provided greater opportunity for the airline to leverage on the transformation of the transport sector as a backbone to industrialize and diversify the nation’s economy – for the common good.

While speaking on the feat the airline has achieved over the years, the Group Executive Director (GED), Resort Group, Mr. Rodger Whittle, said it is highly commendable seeing Dana Air coming all the way up to the level it is at the moment, saying it says a lot about the input individuals and the entire management team have been able to plough in to make the airline what it is today.

He lauded the visionary style of operation of the airline and the standing relationship that have existed within and among stakeholders in the industry over the years, noting that it has paid off going by the torrent of goodwill messages from far and near about the operations of the airline. Bi-Courtney Aviation Services Limited (BASL) is a member of the Resort Group.

Similarly, the Group Head, HR, Resort Group, Mr. Ola Azeez, noted that quality service and good customer relations are necessary ingredients for any organisation to really make meaningful impact in the world today. This, he said the airline has been able to provide to really command fair share in the nation’s aviation sector, stressing the need to keep rolling out practical and workable innovations to truly gain more market shares in the coming years. 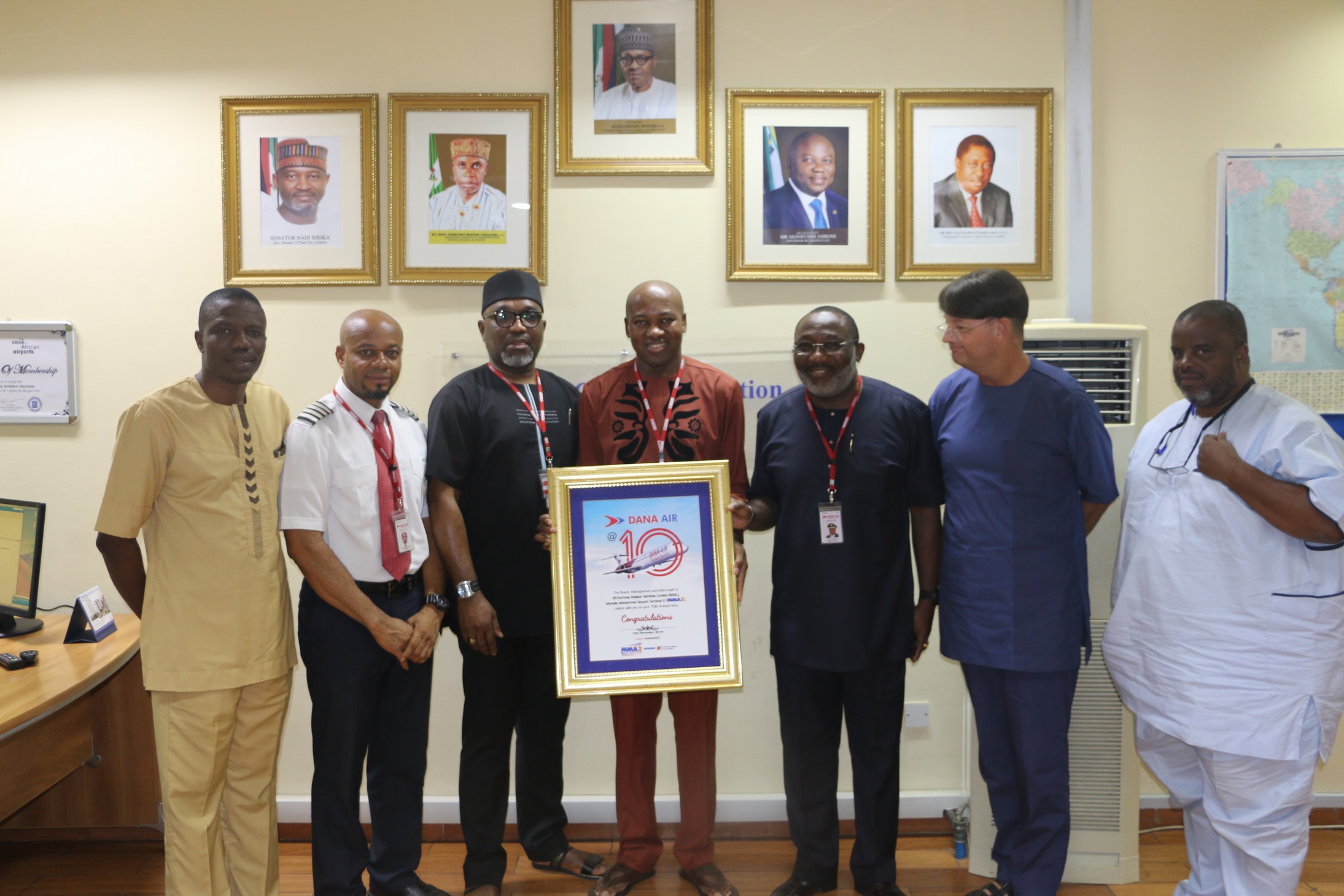 Also, the Head of Aeronautical Services at BASL, Mr. Ralph Uchegbu, commended the doggedness of the airline, saying their success story today could not have been possible if not by dint of hard work and sheer determination to succeed.

At a short presentation of Commemorative Certificate, Mr Whittle maintained that Dana Air still has lot of prospects going for them, reiterating further that one can only wish them more success in the next decades.

In his response, Dana Air’s Chief Operating Officer, Obi Mbanuzuo, expressed his appreciation to BASL’s management for the recognition and support over the years. He stated that the mutual understanding the two organisations have built over the years have impacted their businesses positively, maintaining that the airline has since inception operated at MMA2.

This is a testimony to the seamless passenger facilitation and superior travel experience MMA2 is known for.