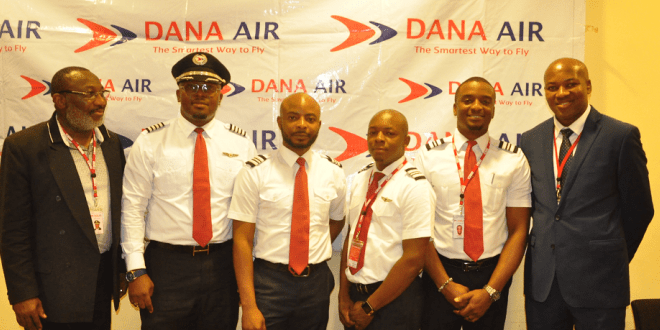 …Airline to get two aircraft soon

Dana Air on Thursday, decorated three pilots, namely:  Ilesanmi Ayotunde, Afolabi Damilola and Lawal Wahab as first officers who have gone through a six month training in Nigeria, South Africa and the United States to become an integral part of the Dana Air family.

Two other pilots-Kalu Syvester and Ibrahim Kassim were promoted as Captains of the airline at the brief ceremony at the Murtala Muhammed Airport Terminal Two (MMA2).

Speaking at the ceremony, Dana Director of Flight Operations, Captain Segun Omole charged the new officers to be good ambassadors of the airline and maintain its reputation saying the beginning of their journey into their career is now and ensure they fly each plane safe and legally.

Omole said ” this is indeed an auspicious occasion for Dana Air, you must always strive to ensure to maintain the tenet of our profession which is that you fly your planes safe and legally”

Omole said the new intakes represent the actualisation of the vision of the airline to continuously train pilots ahead its expansion drive even as it awaits the arrival of two plane from Europe in 2018.

He disclosed that the airline trained 27 Nigerian pilots in 2017 promising to continue to bring in new pilots from its various training schools saying ” catching them young at our training schools afford us the opportunity to mould the young men and women into the Dana culture”.

The airline said it will graduate more pilots in the next few months including a female pilot to join the current 16 Captains and 17 Co-Pilots in its fold.

Speaking on behalf of the new intake, Captain Syvester Kalu expressed joy and gratitude to the airline and promised to take it to greater height saying Dana air has the best safety and customer friendly crew in the country.