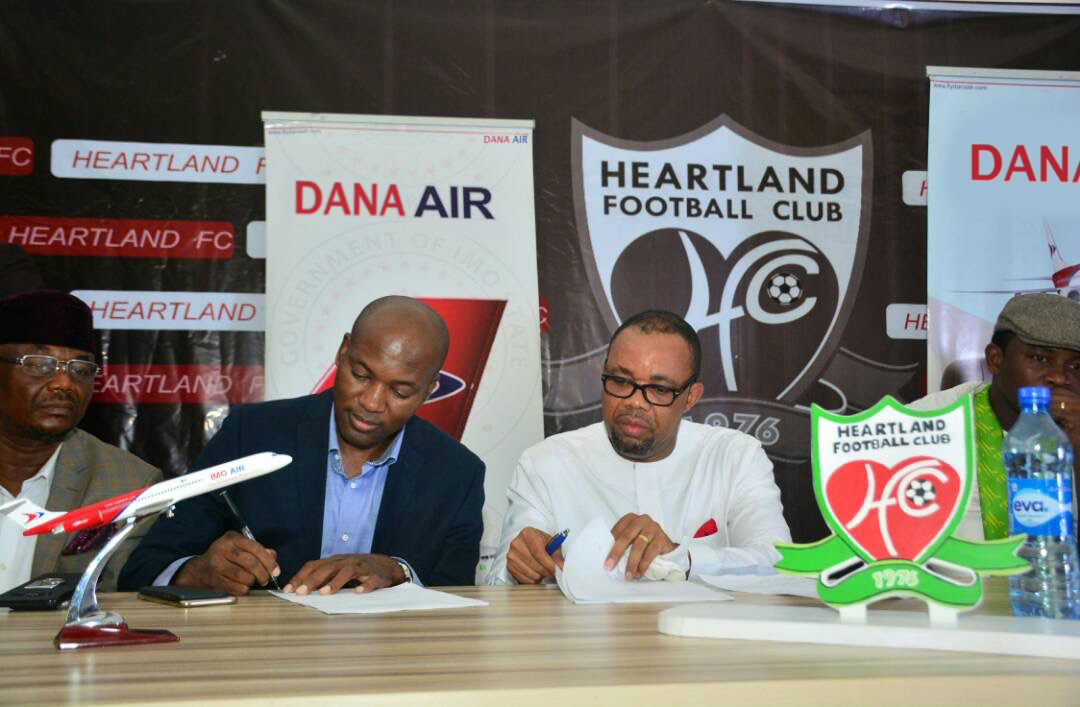 The  partnership between Dana Air and the Imo state Government have started yielding benefits with the recent unveiling of a multi-million naira sponsorship deal with Heartland football club of Owerri Imo state.

The season-long  sponsorship deal which is part of the airlines’ support to the newly-promoted Imo state based team’s 2018 league  campaign,  will see the airline get shirt sleeve branding and lots of other branding opportunities with the club.

Speaking at the unveiling ceremony in Owerri the  the Imo State capital​, the Accountable Manager / Chief Operating Officer of Dana Air, Mr Obi Mbanuzuo said Football is big business and has become one of the most unifying factors in the world.

”At Dana Air, we are committed to supporting our own. We are also committed to youth and sports development in Imo state and in Nigeria at large. There is need to look inwards, so we can build our league and the teams to make them more attractive and glamorous. We have taken the lead and we hope that other corporate bodies will follow.’’

‘In coming up with this sponsorship, we looked at how the team performed last season, their promotion to the upper division and  determination and felt the need to encourage their  fighting spirit and desire to make imolites proud. We believe that our sponsorship will bring the much-needed boost, convenience and motivation to go for the league title this season.’’

Speaking further, Obi said: under this under this sponsorship package, the player of the month will get a whopping cash gift as part of efforts to motivate the players to do better, keep fit, and continuously improve themselves to get the prize.”

Commenting on the deal, the  Imo State Commissioner for sports, Dr. Martins Ohiri ​ said: I am happy that this is happening in Imo state and during my time as sports commissioner.  I want to thank our visionary Governor, His Excellency Owelle Rochas Okorocha for his foresight. I also want to thank Dana Air for this partnership and for taking the lead.’’

The visibly elated chairman of Heartland Football Club of Imo state, Hon GoodFaith Etuemena, ​ during his speech praised the vision of Dana Air, the operators of Imo Air and assured the airline of commensurate mileage on the sponsorship.

“I’m glad that my search for sponsors is finally paying dividends. Hopefully, this partnership would attract more. Heartland is a big brand and we promise to repay the confidence that your company has bestowed on our legendary club.’’

In 2017, Dana Air entered into an airline partnership with the Imo state government to boost tourism potential in the state, encourage business and leisure trips and create employment opportunities for its indigenes.