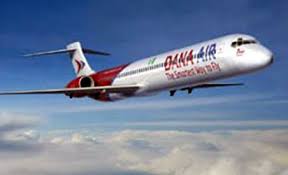 As part of its continued commitment to improving the lives of youths and girls while providing the platform for their empowerment, Dana Air has partnered Kinabuti Fashion Initiative on Dare2dream season 3.

Created in 2014, Dare2Dream is one of most anticipated fashion reality show, offering a platform for young Nigerian girls to develop confidence, talents, values and principles while opening doors for them to build a career in fashion.

Speaking on the initiative, the Accountable Manager of Dana Air, Mr Obi Mbanuzuo, said, “We are pleased to support Dare2dream again this year. As a responsible corporate citizen, it’s always fulfilling for us to inspire Nigerian youths, to believe in their dreams and never relent in achieving them. Commenting further, Obi said: we actually believe in the popular saying, that if you train a child, particularly a girl child; and give her the right value, you will be training a generation.

Kinabuti Co-founder, Caterina Bortolussi, while speaking at the press conference to officially kickoff season 3, said “Six girls will be selected from three universities and they will fly to Lagos by Dana Air, the smartest way to fly, for the boot camp. For a period of 10 days, the girls will be challenged, trained, mentored on various aspects of fashion, modeling and other creative activities. In the course of this, some of them would be eliminated based on their skills and overall performances. The experience promises to be fun-filled, challenging, empowering and rewarding.’’

Speaking further, Caterina noted that the auditions will be across University of Port Harcourt, University of Calabar and University of Lagos, “casting aspiring female models with extra talent, but also selecting aspiring designers and performers to showcase their abilities at the grand finale, scheduled for Sunday 11th September, at the Federal Palace Hotel & Casino, Victoria Island.”

The airline is one of Nigeria’s leading airlines with over 27 daily flights from Lagos to Abuja, Port Harcourt, Owerri and Uyo.