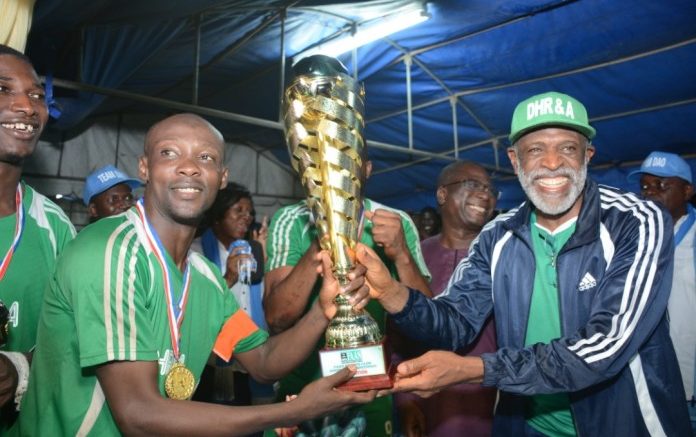 The Directorate of Human Resources and Administration (DHR&A) team has won the fourth edition of the inter-directorate football completion held at the Murtala Muhammed Airport (MMA) School field with a slim 1-0 score line over the Team Directorate of Airport Operations (DAO).

This is just as the Federal Airports Authority of Nigeria (FAAN) has promised to consistently support its staff to take part in sporting activities, saying that this would further boost their health status.

Speaking at the closing ceremony of the event, Capt. Hamisu Yadudu, the Managing Director of FAAN, represented by Mrs. Nike Aboderin, director of Finance and Accounts, declared that the management would continue to sponsor the football game, including any other sporting activities in the country.

Yadudu emphasised that sport was very necessary for human development, adding that with sports, all the parts of human bodies would perform optimally.

He also congratulated the Local Organising Committee (LOC) for organising a successful tournament, recalling that at a recent Public Service Games held in Bauchi State, FAAN football team defeated all other teams from various public organisations to clinch the gold medal.

She said: “The tournament has come to stay and I want to assure you that management will continue to give necessary support to this project within the confines of resources available at our disposal. FAAN will continue to promote and encourage our staff to engage in different sporting activities.

‘To all the teams that have participated in this tournament from the various directorates, I congratulate you all. Unfortunately, in tournaments like this, only a winner will emerge, but you all have done very well. I congratulate the winner of this tournament and I urge you to keep up the winning spirit and also embrace excellence in all aspects of your life.”

Also, Mr. Jimoh Sani, Chairman, LOC, speaking at the event, told journalists that the essence of the tournament was to instill unity, togetherness and improve the health status of every worker of the agency.

Apart from the winner, which went home with a giant trophy, cash reward and gold medal, Sani explained that all the seven participating directorates were adequately rewarded.

He assured that the LOC would inject lawn tennis, table tennis and basketball in the subsequent edition of the tournament, starting from the 2020 tournament.

He said: “The essence of the tournament is to instill unity, togetherness and fair play among the seven directorates in FAAN. We see it as a family game. There is no loser or winner at the end of the day. Every contestant has something to go home with, including the team that came seventh in the tournament, but as you all know, the team that comes first would get highest prize available. That is the rule.

“We want to enhance our health status and improve our productivity with this competition. We know that a healthy worker is a productive worker. That is what we are driving out. This competition like others is sponsored by the management. And management is ever ready to shoulder any issue that may arise from this competition such as injury and others.

The only goal of the game was scored in the first half via a defensive error.