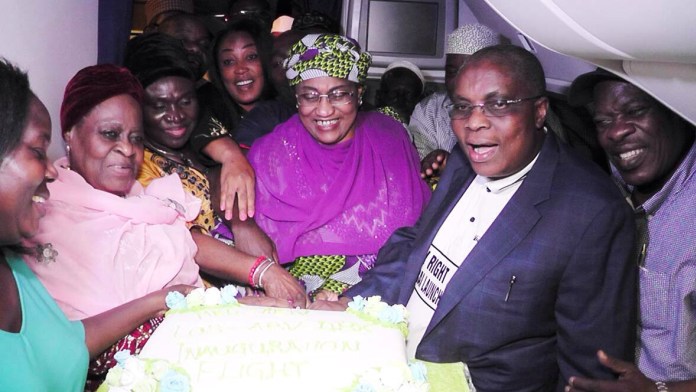 Med-View Airline on December 7, launched its inaugural flight to Dubai amid pump and pageantry, as the Chief Executive Officer of the airline, Alhaji Muneer Bankole, promised to offer free ticket to travelers who have flown five times on the route.

He said as a Nigerian carrier, there is need to encourage the citizens to remain loyal to the company, adding that such packages are some of them.

“We have a special free baggage allowance, with two pieces of 25kg each, which gives 50kg, that is a wonderful gift as well and we want to say to you coming onboard this flight, we will continue to remember you, this is the beginning of good things to come to the country called Nigeria”, he said.

The aircraft which took off from Lagos after 3 pm landed at the Nnamdi Azikiwe International Airport, Abuja where it was welcomed with water cannons by the Federal Airports Authority of Nigeria, FAAN fire men after landing at the airport for the first time.

The aircraft afterwards, boarded passengers from Abuja before heading to Dubai around 10 minutes after 6pm and landed 12:20am Nigerian time in Dubai.

The B767-300 had about 80 percent passenger capacity which was an impressive record for a maiden flight.

On-board the flight were the minister of Women Affairs, Hajia Aisha Jumai Al Hassan, the managing director of Med-View Airline, Alhaji Muneer Bankole and his wife, Super Eagles striker, Odion Igalo, the representatives of the Oba of Lagos, aviation Journalists, among other dignitaries.

One of the unique features of the flight was the introduction of Nigerian menus, like Jollof Rice, Pounded Yam, Semovita and Egusi Soup, Pastas among other foods.

Bankole also used the opportunity to intimate the passengers of the new routes to start soon and other existing routes.

“Medview airline operates 4 flights to London as you are all aware and we are here on the Dubai route for 3 times weekly and we hope to commences Jeddah on schedule flight on 24th of December, 2017 on Thursday and returning on Sunday, this will continue till summer and that will make it 4 flights during the Ramadan. And the big news everyone of you is expecting in the direct flight to Huston come summer 2018”.

Speaking on-board the flight, the managing director of Med-View Airline, Alhaji Bankole thanked the passengers for patronising their own Nigerian airline.

He assured that the airline will not fail the passengers for making it their preferred choice on the route.

Med-View boss promised the passengers that if they fly the airline on the route five times, the sixth will be free for them.

Bankole stated that the airline will be flying to Dubai, three times in a week. 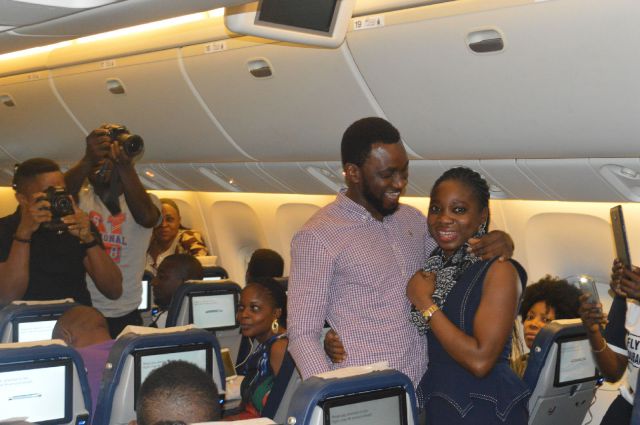 The high point of the flight was the cutting of the maiden flight cake on-board by the Med-View boss, the minister of Women Affairs and some passengers to celebrate the inaugural flight which was shared to all the passengers.

Another sightseeing at the inaugural flight was a passenger, Tayo Adesokan who used the occasion to surprise his girlfriend of many years, Tolulope Sanya by proposing to her to marry him.