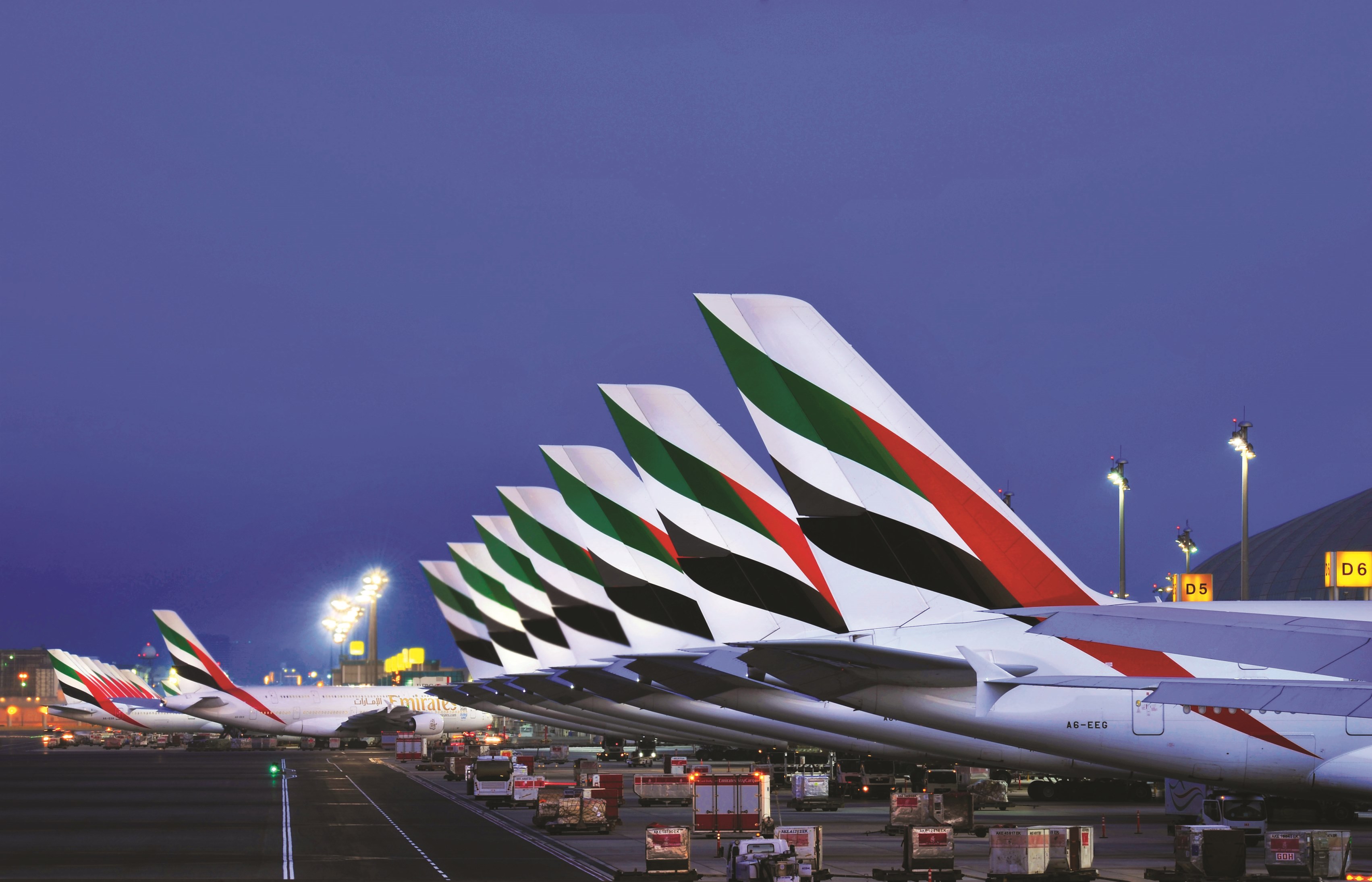 Emirates, the world’s largest international airline, will conclude another year of growth underscored by standout milestones across its fleet, network, and customer experience initiatives. Its growing business footprint also delivered increasing positive impact on the economies and communities it serves.

Since January 2015, the airline has carried over 51.3 million passengers, which represented 9 percent more passengers during the same period in the previous calendar year.

Emirates operated around 3,600 flights on average per week, or over 186,000 flights in 2015, travelling more than 824 million kilometres around the globe, which is the distance equivalent of more than 1,000 trips to the moon and back. The airline served over 57 million meals on its flights departing Dubai, and handled over 35 million pieces of baggage in Dubai alone.

Remarking on this year’s accomplishments, Sir Tim Clark, President Emirates Airline said: “2015 has been one of considerable growth for Emirates as we continued to steer our course despite the headwinds of regional conflict, unfavourable currency impact, and shaky business and consumer confidence in many global markets. Emirates has come out strong, as our mindset, combined with our fleet and network strategy has enabled us to absorb shocks and maximise opportunities.

Through our 30 years of operation to date, Emirates has always stayed focused on its core strategies: an efficient fleet and operations that capitalise on Dubai’s strategic location and infrastructure; an excellent product and service proposition for our customers; and recruiting and retaining the best talent from around the world. We will continue to build on these strengths, even as we drive ourselves to achieve new goals and set new standards for ourselves and the industry.”

Strategic fleet investment
Emirates added 26 new aircraft to its fleet in 2015, comprising 15 A380s, 10 Boeing 777-300ERs and 1 Boeing 777 Freighter, rounding off the year with 246 aircraft in service.
With the addition of new aircraft in 2015 and 26 more aircraft slated to retire in 2016, Emirates is committed to flying a younger, modern and environmentally friendly fleet that provides customers with a superior level of comfort and safety.

The airline marked its 150th Emirates 777 delivery milestone, as part of a triple delivery of two Boeing 777-300ERs and one Boeing 777 Freighter in one day in September. An Airbus A380 was also part of that bumper delivery, strengthening Emirates’ position as the world’s largest operator of both the A380 and Boeing 777.

At the Dubai Airshow in November, Emirates introduced the world’s first two class configured A380 with the capacity to carry 615 passengers. The aircraft drew in over 18,000 visitors in five days, and currently serves passengers flying to Copenhagen and Bangkok.

Connecting the world to, and through Dubai

The airline expanded its network to 150 destinations in 2015, with the addition of six new passenger destinations: Bali, Multan, Orlando, Mashhad, Bologna and Sabiha Gokcen in Istanbul; and three cargo-only destinations in Ouagadougou (Burkina Faso), Columbus (USA) and Ciudad del Este, (Paraguay). In addition, Emirates uplifted frequencies and upgraded capacity to numerous points across its network.

In August, Emirates announced plans to launch services to Panama City, beginning 1st February 2016. The new service will be the longest non-stop flight in the world (17 hours 35 minutes) and will be Emirates’ first gateway destination in Central America.

In 2015, Emirates expanded the number of cities served by its flagship A380 aircraft to 36. Emirates brought A380 services to Perth, Dusseldorf, Madrid and Copenhagen, and layered on more A380 services to the schedules of nine other existing points spanning east to west, to highly positive customer feedback. During the year, Emirates also led one-off A380 services to seven destinations: Prague, Taipei, Brussels, Sao Paulo, Cologne, Manama and Doha.

Emirates continues to invest over US$20 million annually to install and operate in-flight connectivity systems which enable onboard Wi-Fi services. This year alone, over four million Emirates passengers connected to Wi-Fi on board, reflecting the strong consumer demand for connectivity services while travelling.
Emirates rolled out its newest generation in-flight entertainment (IFE) system on its newly delivered Boeing 777-300ER in August and Airbus A380 aircraft in November, featuring the largest in-seat screens in First and Economy Class, along with three times the media storage – elevating the viewing experience and offering passengers in all cabin classes an even greater choice of content. This followed the launch of new, redesigned headphones for Economy Class travellers in April.

In October, Emirates launched new amenity kits for its First and Business Class customers in collaboration with luxury Italian brand Bvlgari. For travelling families, Emirates released its newest range of toys and activity packs in November to keep young travellers entertained – Fly With Me Animals, and Fly With Me Lonely Planet Kids activity bags.

On the ground, Emirates expanded its lounge network with the opening of new facilities in Tokyo Narita and Los Angeles International airports, taking the total number of dedicated Emirates Lounges globally to 38.
Making it easier for customers to access their flight information and manage their travel, Emirates launched its mobile App for customers using the Android platform, and an App for Apple Watch designed to complement the popular Emirates iPhone app. Emirates also launched its mobile site in several languages including: Arabic, Spanish, French, German, Japanese, Russian, Chinese, Turkish, Greek, Italian, Korean and Polish.

Emirates continues to have an important positive impact on the economies of the markets it serves – through the provision of international air transport links that facilitate trade and tourism flows, direct employment through its growing business, and indirect employment through the aviation supply chain and the other industries reliant on commercial air transport.
In 2015, this effect was felt again through the aviation supply chain when Emirates announced a historic US$9.2 billion (€8.7 billion) deal with Rolls-Royce for Trent 900 engines to power 50 of its A380 aircraft, and a long-term TotalCare package. The deal was the largest ever for Rolls-Royce, and one of the largest ever export orders for a UK-based company.

In November, Emirates signed a $16 billion OnPoint solution agreement with GE Aviation for the maintenance, repair and overhaul (MRO) of the GE9X engines that will power the airline’s fleet of 150 Boeing 777X aircraft. Spanning 12 years, the deal is Emirates’ largest engine MRO contract to date, and also GE Aviation’s largest ever commercial jet engine award from an airline.

In March, a report by Frontier Economics was released, estimating that Emirates contributed €6.8 billion to the economies of European Union countries in 2013 and 2014, supporting more than 85,000 jobs. Frontier also analysed European international air connectivity and concluded that Emirates provides 220 unique air connections that are not offered by any other airline or alliance.

In November, the National Council of Applied Economic Research (NCAER) in India released the results of an economic impact study that measured Emirates’ contribution to the Indian economy. NCAER estimated that Emirates’ operations contributed over US$848 million annually to India’s GDP, supporting over 86,000 Indian jobs and generating almost US$1.7 billion in Foreign Exchange Earnings.

Supporting communities and passions
Emirates remains the world’s most valuable airline brand, and in 2015 the airline’s brand value grew more than 21% to US$6.6 billion, according to The Brand Finance Global 500 report. Through 2015, Emirates continued its support for a wide range of events, sports and other initiatives which brought the airline closer to its customers.
Emirates amplified its football presence when it announced that it will become the Lead Partner of The FA Cup, now called The Emirates FA Cup, until 2018. Closer to home, Emirates announced a three-year, AED 25 million agreement with the Arabian Gulf League where it became the Official Partner and Airline. In Portugal, Emirates extended its sponsorship of Benfica when it became shirt sponsor. Later in the year, Emirates Cabin Crew got Benfica fans cheering with a tongue in cheek “safety demonstration” on how to show support for the club, in an initiative which won hearts and became viral on social media.