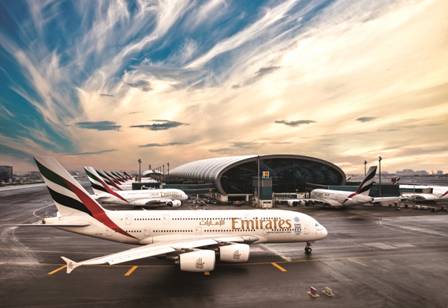 Emirates has been named the World’s Best Airline 2016 at the prestigious Skytrax World Airline Awards 2016.

This is in addition to scooping up the awards for World’s Best Inflight Entertainment for a record 12th consecutive year, and Best Airline in the Middle East.

Based on the results of the largest airline passenger satisfaction survey in the industry, the World’s Best Airline Awards are considered a global benchmark of airline excellence. This year’s Skytrax awards were based on a total of 19.2 million completed surveys covering 280 airlines, by customers hailing from more than 104 countries.

The Skytrax survey measures quality standards across 41 key performance indicators of front-line products and services in the airline industry.

Sir Tim Clark, President Emirates Airline, said: “We are honoured to be recognized by the prestigious Skytrax awards. Emirates has always put our customers at the heart of what we do, and we work hard to deliver the very best experience possible to our customers at every touch point, every day, all around the world. We constantly invest in our product and services, both on the ground and in the air. We listen carefully to our customers, and then relentlessly challenge ourselves to deliver and exceed expectations. The fact that these awards are based on the direct feedback from passengers is gratifying and wonderful recognition for all of the hard work that’s gone into creating the Emirates experience.”

Commenting on the Award, Edward Plaisted, CEO of Skytrax said: “This fourth World’s Best Airline title for Emirates is a fantastic achievement and true testament to the airline’s popularity. To satisfy customers from such a wide and diverse passenger base is not an easy task, but Emirates continues to gain superlative feedback from customers for its product and service offering from the front to the back of the aircraft. The IFE that Emirates provides is a continued focal point for passenger praise and it is important to note that customers were not only impressed with the programming but also the superior hardware standards, particularly for the A380 fleet.”

Emirates is the world’s largest international airline, with an extensive network that has grown to offer its customers a choice of 154 destinations in 81 countries across six continents, with convenient connections through its hub in Dubai. The airline operates one of the world’s youngest modern wide-body fleets. These aircraft are not only more efficient to operate, but are also more comfortable for passengers to fly in – enabling Emirates to install and offer the latest onboard products.

Over the past 12 months, Emirates has rolled out a number of new product and service investments, including the unveiling of a new 777-300ER Business Class seat; expanding its global Emirates Lounge network to 39 with the opening of new facilities in Cape Town; launching new children’s toys and activity kits both on board and in the lounges and new amenity kit bags for First and Business Class travellers, investing over US$140 million in its wine programme for all cabin classes in 2015 alone, and much more.